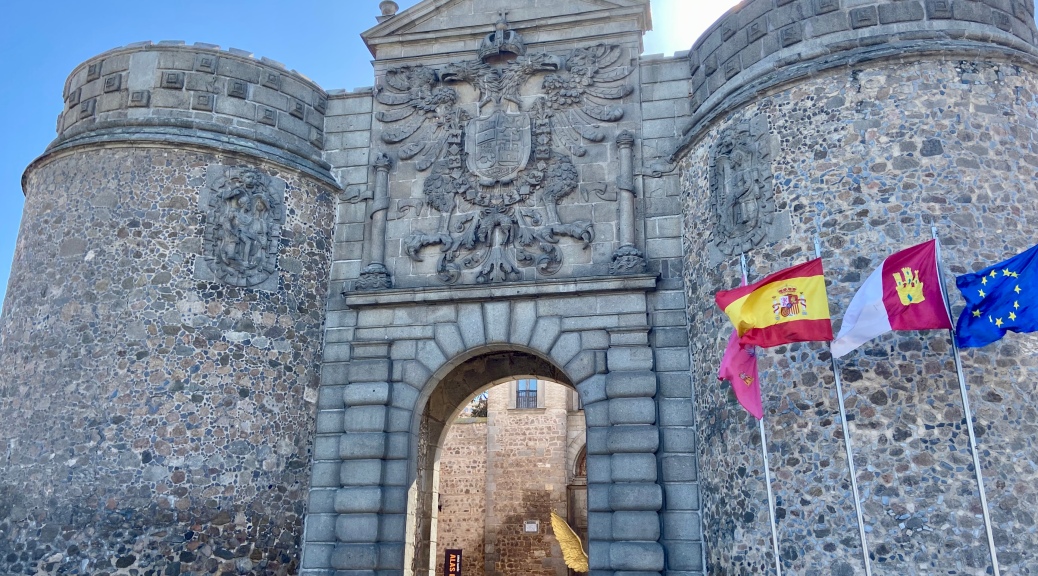 I took a weekend trip to Madrid to escape the draconian COVID restrictions of Catalonia. Madrid had among the least restrictions in all of Europe. Having already been to Madrid in early 2019, I set my sights on visiting some of the nearby towns. Toledo, the capital of the adjacent region Castille-La Mancha, was not on my radar of places to visit due to the perimeter lockdown technically preventing travel and the closure of restaurants, bars, and museums.

The weekend before, my classmate Shuji successfully visited Toledo. Even though everything was closed, he was able to enter and leave the region without issue. This led to consider visiting Cuenca- another city in the region known for its outside attractions that couldn’t be shut down by the lockdowns. As luck would have it, the day before leaving for Madrid, I saw a news article that Castile-La Mancha was going to allow restaurants, bars and museums to open starting on Saturday – the day I had planned to visit. Because Toledo was closer, cheaper to visit, more famous, and scouted out by Shuji, I decided to visit it instead.

Toledo is connected to Madrid by a special high-speed rail called the ALVIA. The train only goes between the two cities and has no stops along the way. This is Toledo’s only high-speed rail connection. There were currently 3 trains running each day. I took the outbound train at 9:00 AM. Even though I have been on many high-speed rails in Spain, I was still amazed to ZOOOOOOOM through the countryside. 33 minutes later, I was in Toledo.

Toledo’s rail station is a work on art and is considered one of the world’s best examples of Neo-Mudejar architecture- a 19th-early 20th century revival of the Islamic-style Mudejar architecture, which was dominant in Spain from the 13th-16th centuries.

The station is separated from the city by a deep gorge.

I then crossed the gorge on a medieval bridge to enter Toledo.

Toledo was founded at a Roman town atop a hill on a bend of the river Tagus. While unimportant in antiquity, it quickly gained power due a series of 18 Church Councils that occurred in the city in the 400’s, 500’s and 600’s. As a result, Toledo became the epicenter of Christianity in Spain. Like most of Spain, Toledo fell under Muslim rule during the 700’s. During this period, Toledo was a tolerant metropolis where all three Abrahamic religions coexisted in peace. The Jewish community, which had been in the city since the Romans, especially flourished. Unfortunately, the Catholic rulers who reconquered the city around the year 1,050 were not as tolerant to the minority religions. While Jews and Muslims continued to live in the city, mass murders and burnings at the stake would occur every 50ish years.  The Jews and Muslims were finally expelled from the city for good in 1492 due to the Conquest of Granada and Spanish Inquisition.

More recently in the late 20th century, Toledo became the capital of the autonomous community of Castilla-La Mancha, a large but sparsely populated region south and east of Madrid. While a small city, Toledo wields the governmental control and remains the spiritual capital of the country.

My first stop was the enormous Toledo Cathedral. Long considered the center of Catholicism in Spain, this massive Gothic structure is the obvious centerpiece of the city. In fact, the cathedral is so important that in 1561 when Madrid was made the capital of Spain, the Bishop decided to stay in Toledo. As a result, Madrid did not have a cathedral until 1993 when the Almudena Cathedral was completed.

Unfortunately, the Cathedral was closed due to COVID (the only such closure I experienced), but the outside was very pretty.

My next stop was the El Greco Museum. El Greco (Spanish for The Greek) is one of the Renaissance’s and Spain’s famous painters. El Greco has a unique style of painting that is easily recognizable by any European art connoisseur. Originally from Greece, he settled in Madrid before moving to Toledo where he spent the last 37 years of his life. El Greco has many commissions around Toledo and credits the city to helping develop his mature artistic style.

The El Greco Museum is located in a 16th century house that is said to be El Greco’s house but it actually not. Regardless, it contains many paintings and exhibits on his life. The museum also had very strict security including a metal detector and a pat down search. When asked where I came from, I said United States. They let me in but were very suspicious as to how I got here. They had no power to do anything, but I did not answer their concerns.

The El Greco Museum is located in Toledo’s vibrant Jewish Quarter. Prior to the Spanish Inquisition, Toledo was a major center of Judaism in Spain. There were over 15 synagogues in the city. Two of them are still around and are open as museums. The first one I visited was the Sinagogua del Transito. The walls were covered in Moorish-style stonework that reminded me of the Alhambra in Granada. The only way I could really tell it was not a Muslim building was that the stone script was Hebrew, not Arabic. This synagogue also contains a museum about Sephardic culture. Sephardim are one of the two main ethic divisions of Judaism (the other being Ashkenazi). Sephardic culture first originated in Spain. After the Inquisition, these Jews spread to the rest of the Arab world. As a result, most Jews who come from traditionally Muslim areas such as North Africa, the Levant, and Southeastern Europe follow Sephardic traditions.

Recently, Spain has launched a program to allow descendants of Sephardim to “regain” Spanish citizenship. I know of two friends who have successfully completed this process.

The second synagogue, Sinagogua de Santa Maria La Blanca, had a series of Moorish arches the remind me of north African mosques or the Mosque-Cathedral of Cordoba. This synagogue is one of the most impressive Mudejar buildings I have ever seen. After the Inquisition and expulsion of the Jews in 1492, the synagogue became a church, which explains the odd name.

My next stop was the Monasterio de San Juan de los Reyes, an impressive Gothic monastery with beautiful cloisters and a church featuring intricate stonework.

The stonework in Toledo is among the best I have seen in all of Spain.

It was now lunchtime, I wandered the medieval alleyways and stumbled upon a brewery called La Abadia. In addition to a flight of craft beers (very unusual for Spain), I was able to order some traditional foods from Toledo. As an inland city, the most traditional dishes are meat heavy. Perhaps the most famous dish is a stew called carcamusas.

For my final stop of the trip, I visited the Alcazar of Toledo. This large fortress contains Spain’s National Military Museum. I had no real expectations for what I was going to see, but it turned out to be the single best museum I have seen in all of Spain.

The lower floor of the museum is the military history section. There are displays of Spanish uniforms and weapons dating back from the 1400’s all the way up until today.

The upper two floors of the museum tell the story of Spanish history from the marriage of the Catholic Monarchs Ferdinand and Isabela up until the Franco era. The displays are in both Spanish and English and are extremely well written and easy to follow. This is the first time I have gotten to hear the complete story of Spanish history- as all the other museums only tell small segments of it. I spend 2.5 HOURS here trying to learn everything. Truly, truly an incredible museum.

With that, it was time to head back. I walked to the station and 33 minutes later was back in Madrid.

Toledo is absolutely wonderful. The medieval core is one of the nicest in Spain. However the synagogues and the Alcazar make Toledo stand out from the pack. I would call Toledo a perfect day trip from Madrid. You can probably spend a night here if you are a slow traveler or want to soak up the atmosphere. But for the average traveler, a day trip is perfect.

Had I had more time in Toledo, I would have liked to explore the hiking opportunities near the city. The Tagus river gorge is very pretty and is right next to the city.

Had the best weekend celebrating the wedding of my cousin @jjacobs369 and @elizabethrb !!! Loved getting to reunite with family.
At long last, my Dubai blog post is here! While on the surface, Dubai might seem like a Middle Eastern Las Vegas without gambling, there is actually a lot more going on. I spent a lot of effort on this post. I hope you enjoy it.
NEW BLOG POST on my trip to the World Expo in Dubai. This was without a doubt the grandest and most spectacular event I have ever attended. Imagine Epcot but with 191 countries.
5 years of the BCaster AHess Friendship Adopt-A-Highway in Albuquerque, New Mexico. Always a pleasure cleaning the road with you @andhess
Houston, we have a problem!
Had the best time in Newport, Rhode Island at the wedding of @ay_ok and Anna!
Loading Comments...
%d bloggers like this: