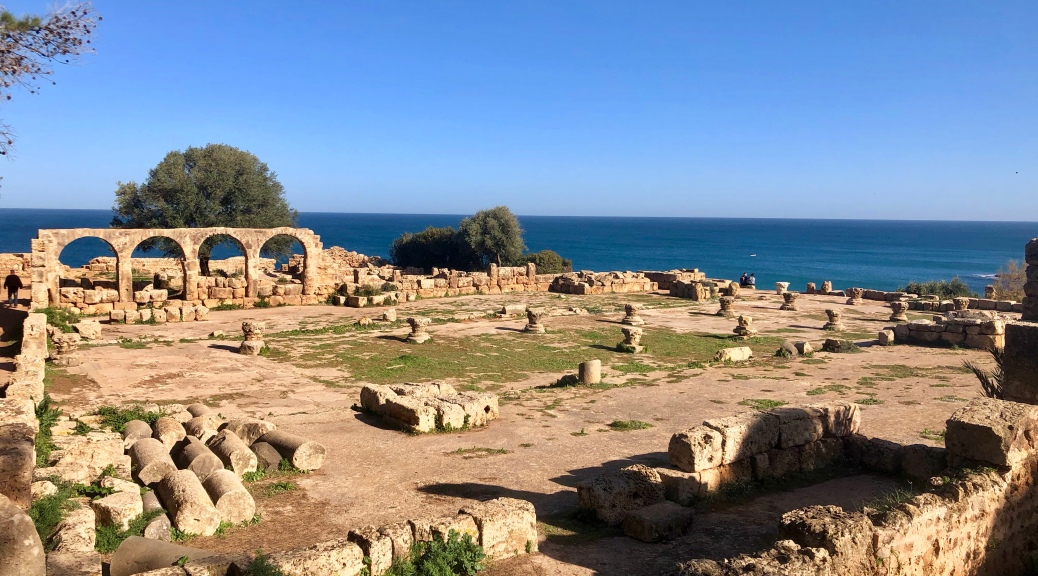 Omar, my guide, picked me up from my Algiers hotel at 9. We drove west out of. The city ended abruptly and we were surrounded by beautiful countryside overlooking the Mediterranean Sea. Green hills and agriculture abound! Even in the countryside, there were police checkpoints every 10 minutes or so – all without incident. After an hour and a half of driving, we reached the town of Tipaza.

The modern Algerian city sits adjacent to the ruins of the ancient Roman town of Tipaza, a UNESCO World Heritage Site.

The Roman ruins had everything: a gladiatorial arena, theater, temples, houses, water fountain for horses, a forum with in-situ mosaics and cemetery. You name it, it was probably there.

The town also happened to be right next to the sea. The coastline here was beautiful! It reminded me of Southern California but without the development.

I would say that the Romans really know how to pick good real estate, except during the ancient times the city was surrounded by a thick wall so the Romans couldn’t actually see the sea.

Although Algeria has almost zero tourists, there are other foreigners. Like in many African countries, the Chinese have a huge presence in the form of construction workers. All the major projects in the country: the highways, a gigantic mosque in Algiers, and the airport to name a few were built by the Chinese. To construct the projects, Chinese construction companies on state contacts fly in workers from China. These workers live in compounds stocked with Chinese chefs with food flown in from China. The building materials are flown in from Europe. Algerians in no way get to participate in the building of the projects. According to my friend who actually worked on one of these projects, the Algerians lack the talent and work ethic to build these projects on their own.

As it so happened, it was Chinese New Year and the workers all got a holiday. A whole bunch decided to come to Tipaza to see the ruins. I counted at least 100 Chinese- all men from 20-45.

After a brief stop at the incredible museum, we headed to lunch.

On the way, we got stopped by police on the way. They checked Omar’s license and let us go. The police were 100% honest and professional. Did I mention the police have the most beautiful blue outfits?

We ate a traditional lunch. I had mint tea, a stew with flat noodles and a half-chicken. The restaurant owners were so kind!

On the way back, we stopped at the Royal Mausoleum of Mauritania. This enormous tomb contained the remains of two important people: King Juba II, son of King Juba I, king of the independent kingdom of Numidia and Cleopatra Selene, daughter of Queen Cleopatra of Egypt and Marc Antony. Once their parents were defeated by Roman forces, the two were taken to Rome and raised by nobility. The Roman government then had them marry and return to Algeria -then known as Mauritania- as king and queen. The Romans smartly thought that the locals would prefer to have a local monarch.

This tomb was constructed in a unique Algerian style that is different from other areas in North Africa. It was more or less intact until the French used it for artillery target practice in the 1800’s. They destroyed the top of one side of the monument. They also used dynamite to get inside the tomb (the real entrance wasn’t discovered until the 1980’s). Luckily, the integrity of the structure remains.

The bodies themselves were most likely stolen in antiquity.

It was now time to head into Algiers.

Having a delicious week in Mexico City 🌮 🇲🇽
I have a new blog post on my early April trip to #Albany, the capital of New York. I also took a side trip on an underground boat ride at Howe’s Cavern.
Had the best weekend celebrating the wedding of my cousin @jjacobs369 and @elizabethrb !!! Loved getting to reunite with family.
At long last, my Dubai blog post is here! While on the surface, Dubai might seem like a Middle Eastern Las Vegas without gambling, there is actually a lot more going on. I spent a lot of effort on this post. I hope you enjoy it.
NEW BLOG POST on my trip to the World Expo in Dubai. This was without a doubt the grandest and most spectacular event I have ever attended. Imagine Epcot but with 191 countries.
5 years of the BCaster AHess Friendship Adopt-A-Highway in Albuquerque, New Mexico. Always a pleasure cleaning the road with you @andhess
Loading Comments...
%d bloggers like this: