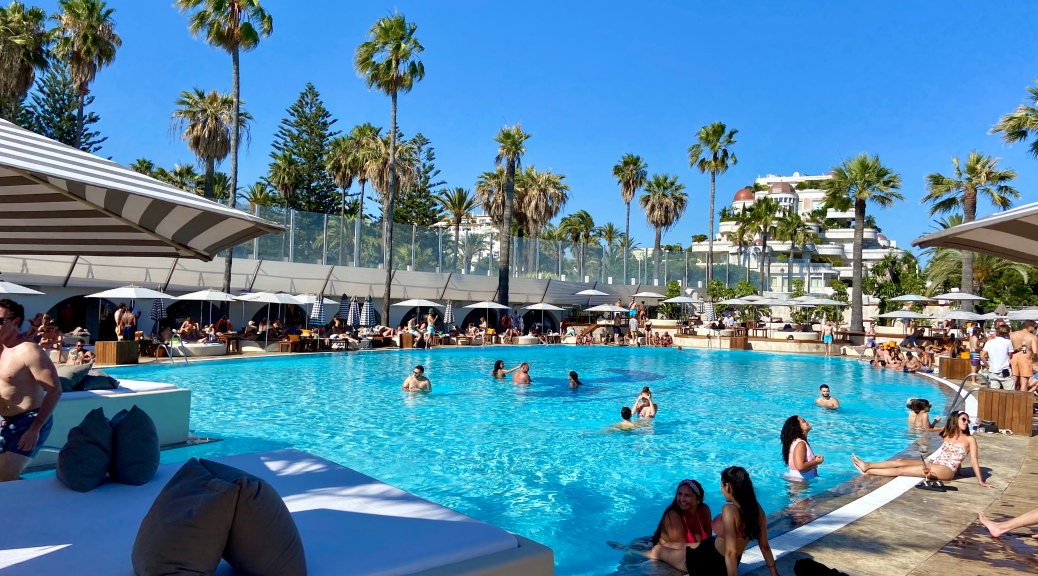 After a fun day and a half in Cordoba, business school friend Cezar, LA friend Milly, and I picked up our final road trip companion, Andrew, at the Cordoba train station. Andrew is the younger brother of my LA friend Bradley. Cezar and I met Andrew in Sevilla two days ago where he explained that he had an open-ended trip in the south of Spain. We were able to convince him to spontaneously join us on our road trip and take a morning train up from Sevilla. Now our wolfpack was complete.

Our first destination was the town of Ronda, two hours to the south. The drive took us through wide open hilly golden plains.

Ronda was founded by the Romans at a key defensive position. The town is surrounded on three sides by an enormous 120-meter-deep gorge. By fortifying the single entrance to the town, the Romans were able to build an impressive fortress. The first bridge over the gorge was built in 1616. During the Spanish Civil War, the bridge was used by both sides to torture and kill the enemy. Ernest Hemingway, who spent much time in Ronda, described the events in his book For Whom The Bell Tolls. As a result of these events, the population of Ronda decreased drastically and has yet to recover.

Ronda is also considered the birthplace of modern bullfighting. It was here where the Romero family introduced many of the hallmarks of bullfighting: the red cape and the sword designed to kill the bull. It was in Ronda that bullfighting became considered an art.

Once we parked, we headed into the “new” town which is still hundreds of years old. The new town is across the gorge from the old town. Because Ronda is in the mountains, it is cooler than in Cordoba and actually feasible to walk around. The new town is now more developed than the old town and has the city´s main walking street and all the stores including a Decathlon.

Our wolfpack ate lunch at famous tapas place in the “new town” called El Lechuguita. In order to order, we had to line up in the street. In line, Milly chatted up an older man who lives across the street and comes in everyday for a beer. She asked him for his recommendations, and we decided to order everything he picked. He gave us great suggestions and we had an amazing meal. The highlight was the lettuce in a unique sour sauce (weird I know but it was amazing).

Then we walked over to the old town which involved crossing the incredible Puerto Nuevo over the enormous gorge. My companions were not expecting this and were in for quite a surprise!

The old town does not have much to see there are a few churches and museums, but the town is pretty and has many places with views of the gorge and the surrounding landscape.

We stopped for smoothies in a leafy square. The group has really gelled, and I could tell that this was going to be an amazing trip. It helped that everyone was an experienced traveler, and even more so that Cezar was an endless fountain of jokes.

After about 2 hours in Ronda, it was time to head to the coast and cooler weather. The closest town to Ronda turned out to be Marbella. The drive took us through a scenic natural area that interestingly enough was declared Spain´s 16th National Park just two days after our visit.

I had actually visited Marbella in October on a different Andalusian road trip and was pleasantly surprised by the town. I wanted to hate Marbella because of its reputation for douchey partying jetsetters, but instead found a cute old town and a well-constructed, classy beachfront. Only afterwards did I learn that I did not visit the most famous area of Marbella: Porto Banus. So, that´s where I took the group.

The first thing we noticed in Porto Banus were the fancy cars. Many Italian sportscars and high end British cars, many with foreign licence plates. The drivers were predictably more aggressive than in other parts of Spain. Despite the obvious wealth and nice buildings, the people dressed tackily. It seemed like a fitting city to be the drug trafficking capital of Europe.

Our wolfpack walked along the nice beachfront path until we reached a day club. From the path you can look at pretty people lounging around a pool with house music blaring. For the sake of irony and the experience, we decided to see if we could visit the club. Due to decreased tourism due to COVID and therefore lower standards for entry, we were let in despite wearing travel clothes.

We ordered €20 cocktails and sat at a table to people watch. This was the Marbella we had all hoped to see: douchey guys from all over Europe and their ladies with lots of plastic surgery. Everyone looked fit and beautiful!

As the house music thumped, we all took a lap around the pool to people watch some more. My favorite person was a guy with a shirt that said “Make Money Not Friends”. We all had so much fun!

Next, we walked over to the marina. Here, fancy shops such as Louis Vuitton sit alongside rows and rows of yachts. It reportedly costs over €4,000/day to park your boat here. Again, we saw many nice cars parked conspicuously.

For dinner, ate at a moderately-priced Italian restaurant that looked incredibly busy at 7pm and appeared to be “the spot”. We managed to get a table without a wait and feasted on enormous portions of pizza and pasta.

Having seen what we came to see, it was time to head to our hotel and the next portion of our road trip in Algeciras and Ceuta.

Ronda is a neat half-day adventure from Malaga or Marbella. The gorge and buildings surrounding it are stunning. I would think the bullring is also interesting to visit. If you are feeling up to it, the hiking down in the gorge looks like the move.

Porto Banus was far tackier than what I was expecting, especially when compared to Marbella´s classy old town and destinations with similar reputation such as the Cote d´Azur. Yes, Porto Banus is international, has fancy stores and has pretty people, but I was not impressed. That said, the area is worth the visit for the people watching -especially in the club. The beach was nice too! If you want to experience real luxury in Marbella, I recommend visiting a resort.

I have a new blog post on my weekend in Newport, Rhode Island. While best known for its Gilded Age mansions, the town is actually a well-rounded destination with colonial-era history, beautiful scenery, food and a lively downtown.
Happy longest day of the year ☀️ from New York City
Love that the Empire State Building is peeking under the bridge
🫧 🫧 🫧
NEW BLOG POST on my trip to New Bedford, Massachusetts. This former whaling capital of the world has one of the most interesting histories of anywhere in the US.
The beautiful backwaters of Kerala
Loading Comments...
%d bloggers like this: