Most visitors to Denmark see only Copenhagen. But Copenhagen is just a small part of the country. I was determined to see a different region of the country- if just for a day. The city of Odense, Denmark’s 3rd largest city, is just a 75 minute train ride from Copenhagen. With a enough sites to occupy a day, I decided to go.

I arrived at Copenhagen’s Central Station just before 8 am. Odense is a major rail center in Denmark, but few trains end there- most just pass through. So finding the correct train was a somewhat difficult task. I eventually got onto a train heading to Jutland (peninsular Denmark). The train itself was very comfortable but figuring out where to sit is also a bit of a challenge, as many of the seats are reserved, but only for specific legs of the trip.

In the town of Roskilde (where I would visit tomorrow), the train stopped. The conductor announced that the train in front of us had hit a passenger. As a result, the track was occupied for an indefinite period of time and we had to deboard. The train then went back to Copenhagen.

We waited 5 minutes for another train to arrive going in our direction. That train took us one more stop until we again had to deboard. This time, the conductor announced that a bus was coming to take us past the wreck.

It took 45 minutes, but the bus eventually showed up. Considering how far we were outside of Copenhagen, I was extremely impressed. The bus ride took about 15 minutes and we ended up in the town of Ringsted. From there, I caught a train to Odense. The whole debacle caused my trip to take an extra 2 hours. Because I left early in the day, this was not a problem.

Next to the train station is the Danish National Railway Museum. Because Odense is in the middle of Denmark’s two population centers: Jutland and Zealand, it is a natural hub. The museum contained many trains including a royal coach. However my favorite exhibit was one about the Interrail pass. When it launched, young Europeans could book a month-long all-you-can-use rail journey. The trains were not so comfortable, but there was adventure to be had. This program helped young Danes see Europe and experience other cultures. This, in the museum’s opinion, helped make Denmark a more welcoming and tolerant place.

It was now lunchtime, so I headed over to the street food market (just like in Helsingor). This market was more extensive and all the booths were in shipping containers. Super cool! I ordered a chana masala and shandy. Outside there was a flea market, which I am convinced is the most blonde girls I have ever seen in one place.

I then headed into the city proper. My first stop was the Hans Christian Andersen Museum. Denmark’s most famous author was born in Odense in 1805. His upbringing was very humble. He was born in a tiny house shared with his parents and grandparents. He was the first person in his family to receive a formal education. At 14, he moved to Copenhagen to become an actor.

Currently, the HC Andersen sights are a bit of a jumble. There is a museum which tells the story of his life. A few blocks away is the birth house. And then the childhood home is another 10 minute walk away. Both homes are tiny and take no more than 10 minutes to see. All three sighs can be seen on one ticket.

In a year or two, the new HC Andersen museum will open up adjacent to the birthplace home. Based on the renderings, this museum is going to be very large and interactive. Andersen is best known as a fairy tale writer and nothing currently talks about his fairy tales. The new museum apparently is going to “bring the fairy tales to life”.

I then walked to the cathedral. While simple brick on the outside, it had an authentic Gothic interior. In a unique twist, the interior was white making this the only white Gothic church I have ever seen.

In the basement underneath the high altar were the bones of St. Canute, king of Denmark from 1080-1086. St. Canute is the patron saint of Denmark according to the Catholic church. However, the cathedral is now Lutheran.

Below the cathedral is a beautiful riverfront park that extends for many kilometers. I walked for about 3 km and found my way into the center of town with a beautiful manmade waterfall and a riverfront café. There were also tour boats cruising upstream. I was so impressed by this area. 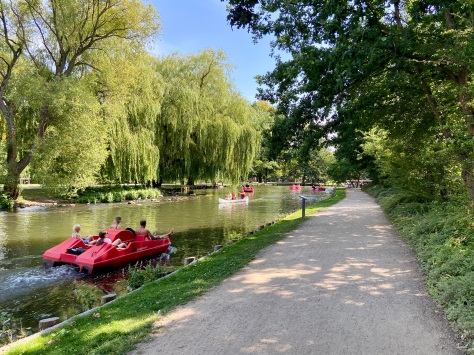 After a quick stop for juice, I walked back to the train station to go to Copenhagen. While Odense is admittedly not as exciting as the castles in the north of Zealand, it has enough to see and feels authentically Danish. If you want to see the real Denmark, Odense is a great option. And who knows- maybe the new museum will finally be open!