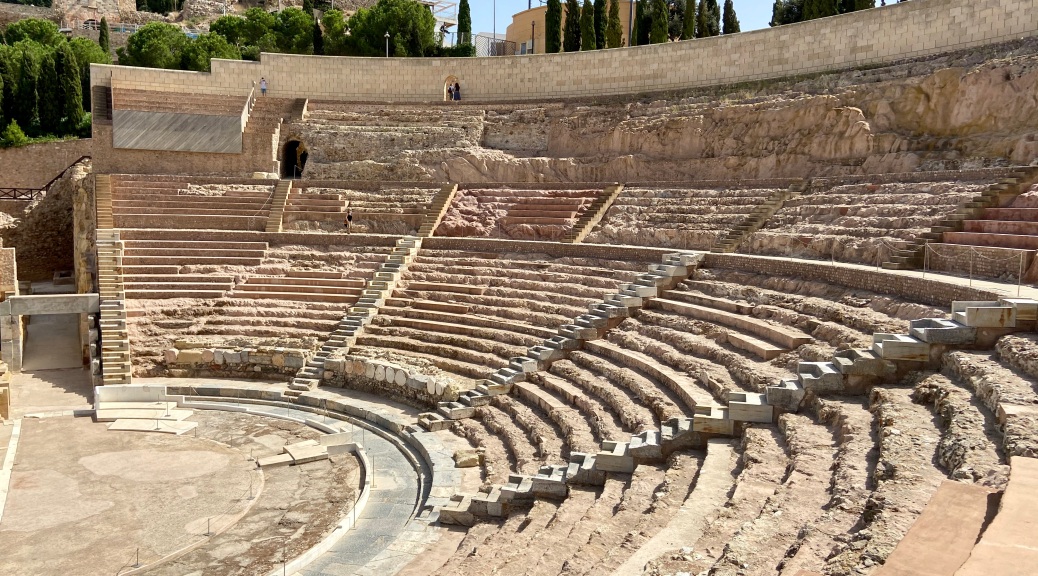 Given the restrictions of COVID, I figured that traveling internationally this school year would be difficult. Therefore, I set a goal of trying to visit each of Spain’s Autonomous Communities (equivalent of a state) before graduating IESE. As a resident of Spain, I feel like it is important to see the country.

One of the least-known autonomous communities of Spain is Murcia. It is a tiny region in the south of Spain sandwiched in between two very popular regions: Valencia’s Costa Blanca and Andalusia. Additionally, I heard from some of my Spanish friends that Murcia is the worst place in Spain. I was determined to prove them wrong.

I had a long weekend and the weather in most of Spain was looking atrocious. However, the weather in Murcia was spectacular. So, I booked a train to Alicante – 4 hours south of Barcelona. There, I spent the night and rented a car to head further south the next morning.

My first stop was the city of Cartagena.

Cartagena has quite the illustrious history. It was founded by the Carthaginians as Cartago Novo (New Carthage) in 227 BC. The site was picked for its outstanding natural harbor. Just 20 years later, it became part of the Roman Republic. During this era, it thrived and became a major trading center in the western Mediterranean. It then was sacked by the Visigoths and was ruled by a number of different Germanic and Muslim kingdoms until 1245 when it returned to Christian control under the kingdom of Castille, the precursor to the Kingdom of Spain. During the Spanish Civil War, Cartagena was the location of the Republican naval fleet but interestingly suffered little damage.

Cartagena retains a decently preserved old city. However, the major attraction is the Roman ruins. Interestingly, Cartagena seemed to have forgotten its Roman past and built over it…until just a few decades ago when local construction projects uncovered parts of a huge city. The largest find: the perfectly preserved Roman theater was only discovered in 1989.

The forum was discovered in 2009 and is still being uncovered!

Many discoveries are also happening in the ocean. There is an entire museum dedicated to underwater archaeology. However, it is undergoing a renovation and was closed at the time of my visit.

It is very cool that there is still so much of Cartagena left to uncover. This could be the next Tarragona (city 1 hour south of Barcelona that also has spectacular Roman ruins). There is definitely enough to see in a half-day or even a day if you see everything. But my guess is that this city will be exponentially better in 10-15 years once more of the ruins are discovered.

I would have loved to stay longer, but time is limited. So I headed towards the beach, specifically La Manga- a weirdly-shaped 21 kilometer-long but 100-meter wide peninsula that separates the ocean from an inland sea.

The La Manga peninsula was more or less uninhabited until a hotel and condo boom in the 1960’s. Everything was built so quickly that not much attention was paid to the quality of the architecture. As a result, La Manga is one of the ugliest places I have ever seen, which is such a shame because the beach is AMAZING.

After a dip in the pool-temperature water, I drove to my final stop of the day, the city of Murcia.

Murcia city is the largest city in the Murcia region with over 600,000 people. Despite its size, there is shockingly little for a tourist to do. In fact, Lonely Planet listed just 2 activities: the Cathedral and the Casino (a private social club).

The cathedral was closed due to renovations so the Casino was it. Despite the name, the Casino is not a place for gambling. Rather it is an old private social club that still is in operation today. The architecture is so spectacular that they are open to visits during the day.

The entry hall is in the neo-Mudejar style and reminded me of the Alhambra in Granada. Further inside was a Baroque ballroom and a ladies parlor with an incredible painted ceiling. In total, the visit took about 30 minutes and was really fantastic.

My hostel happened to be right in the middle of the city center- just a block down from the Casino. Although there is little to do, the city center is beautiful!

I grabbed a locally-famous pastel de carne (meat cake) and strolled around. The narrow alleys and plazas are stunning.

At 8:30, the restaurants opened for dinner. Murcia is known for having one of the best restaurant scenes in all of Spain so I knew this was the town to go big for dinner. I went to El Pasaje de Zabalburu and got the meal of a lifetime. The highlight was a grilled fish where I could eat the entire fish including the skeleton and head. Simply amazing.

At that point it was time to head to bed.

While far from my favorite place in Spain, I enjoyed the region of Murcia because it was authentically Spanish. The region is so void of foreign tourists that I felt like I was getting to see the real culture. To me, that is as important if not more important than seeing the big sights. It in places like Murcia, where the expectations are low, that amazing experiences happen.  And who knows, in 15 years Cartagena might be the next big thing…

I have a new blog post on Kyrgyzstan. This one covers some background info and the first night.
The incredible volcanic colors of Lanzarote in the Canary Islands 🇮🇨
Holaaaaa Lanzarote 🇮🇨
New blog post on Cantabria, my 17th and final Autonomous Community in Spain. I visited a 30,000 year old cave, a medieval town and even a Gaudi house.
Seems like a good time to announce that I have accepted a position as a Consultant at ZS Associates in New York City!! The firm focuses primarily in the healthcare and pharmaceutical industries. The job starts in October.
NEW BLOG POST!!!! The Basque Country is one of Spain´s most popular and delicious regions. In 3 days, I cover most of the main coastal areas of the region including the famous cities of San Sebastian and Bilbao.
Loading Comments...
Comment
×
%d bloggers like this: