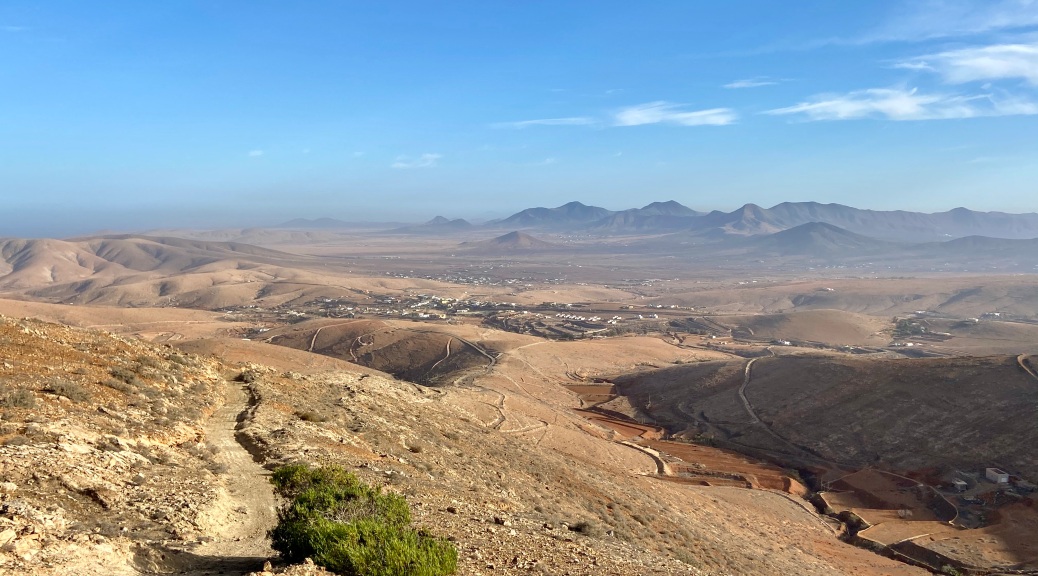 COVID was putting a real clamp on travel around Europe. Spain started requiring PCR tests for everyone entering the country from “high risk” countries, which meant nearly everywhere in Europe and nearly every country that flies directly to Spain. Additionally, the regions of Spain were “sealing” their borders and implementing movement restrictions. With restrictions changing nearly daily, I knew I had to be clever to travel.

I last-minute saw a relatively cheap ($105) roundtrip flight to Fuerteventura in the Canary Islands. Fuerteventura was in no way on my list of places to travel in Spain. But considering my limited options and positive experience in Gran Canaria, I decided to go for it just two days before the trip. I rented a car and the cheapest AirBNB I could find, which appeared to be a climbing gym.

My AirBNB had not confirmed, but I had already clicked book so I was at the mercy of the platform at this point. While at the airport, I got a message from Hugo, the host saying that I was good to go. We planned to meet up at 20:00.

The RyanAir flight from Barcelona to Fuerteventura took about 3 hours and was uneventful. I then rented my car and arrived at the AirBNB where I was met in person by Hugo.

Hugo led me into the AirBNB, which was actually a climbing gym. In the center near the crash pads was a mattress.

Hugo then took a very long time to explain everything around the AirBNB to me. He asked if I was a climber- the reason Hugo started the AirBNB was to find fellow climbers. We then talked about the island and Hugo gave me recommendations. After a long chat, Hugo invited me to visit his farm to make pizzas and roast chestnuts. Based on the conversation, I had a feeling this would be an epic experience.

Hugo and I drove to the nearby market and purchased food for the night. I then followed him 15 minutes in to the center of the island along a series of dirt roads. Eventually, we arrived at the farm.

There, Hugo gave me a tour of his incredible property, which he acquired 2 years ago and developed completely on his own. First, we met his two donkeys Juan Carlos and Felipe (named for the king and old king of Spain) and a lamb he bought earlier today.

We then walked around his garden, which had seemingly one of every fruit, vegetable, or herb. Somewhere in the garden, I ran into his dog, Virus, who was chained up to a post. We then went into the greenhouse where he was growing a few marijuana plants (which IS legal in Spain).

Then, we walked over to Hugo’s house, which looked like a teepee made out of palm leaves and adobe. During the pandemic, he dug down about 3 meters into the ground to create a one-room underground home. His next project is to build a pipe that transfers the heat from his fireplace to heat a bathtub located at ground level.

Before the teepee was completed, he lived in a trailer, which is also parked on the farm. It is currently his only source of electricity, so he now uses it to charge his phone.

Finally, we reached his kitchen: a covered open-air space with some comfy chairs, a fireplace and pizza oven built into the rock.

As we cooked the pizzas, Hugo told me his life’s story. He grew up in Madrid and, at the age of 18, left home for Fuerteventura because he hated the city life and wanted to surf. After a series of odd-jobs, he managed to purchase an old rock climbing gym. He made money by teaching rock-climbing and lived in a small apartment above the gym. It was two-years ago that he bought the farm. He was able to accomplish all this and still have time to surf or rock climb nearly every day.

Today, Hugo is 29- the same age as me although you would never guess it given his incredible beard.

I am truly in awe of Hugo. While he chose a lifestyle that not everyone would want, nobody can deny that he is going all in on following his dreams. I wish I had the courage to be more like Hugo.

It was now 1am- we had been talking nonstop for 5 hours! I was getting really tired and drove back to the gym.

I woke up at 8:30 am (Spain is causing me to sleep in), I got on the road to explore Fuerteventura. Hugo gave me a good itinerary of towns in the center of the island. I intended to follow his advice- as he had steered me well so far.

Fuerteventura is known as the desert island. The scenery is extremely desolate – not that unlike the Mojave Desert in my native California. For those coming from green Europe- this must look like Mars.

My first stop was a sweeping viewpoint of the island. At this viewpoint were statues of Guise and Ayose. They were the rulers of two Berber kingdoms on island when the Spanish landed on the island in 1402. The Spanish set up a small town, but, realizing that their company of 60 men wasn’t enough to conquer the island, waited for their leader to return to Spain to get reinforcements. Once the reinforcements arrived in 1404, the kings realized they could not win and pretty quickly surrendered. Had the two kingdoms not been at war, there might have been a real resistance like in Tenerife.

The Spanish then set up a new capital in the city of Betancuria. The town, named for the French leader of the Spanish conquest, is therefore one of the oldest Spanish colonial cities in the world. The city’s architecture and climate reminded me so much of Baja California if the buildings were better maintained.

Betancuria has a stunning church and some nice dining options. The one thing to note is that there is no ATM in town.

I then drove south through SoCal-esque canyons en-route to the beach town of Ajuy. This small beachfront town has a black-sand beach!

Additionally, it has some stunning sea caves.

Continuing south, I reached La Pared, a beautiful beach popular with surfers. True to the name, there were some stunning steep sea cliffs here.

To the south of La Pared is a large sand dune field, and beyond that the Jandia Peninsula at the southern extremity of the island. The Jania Peninsula is a full-day adventure so it would have to wait.

For lunch, I crossed to the “tamer” east side of the island. In the town of Costa Calma, I got my first glimpse of the mass-tourism on the island.

The beach in Costa Calma was broad and sandy, but nothing special.

It was now about 4pm and time to start heading north back towards Puerto del Rosario.

I stopped briefly at a lighthouse before getting to explore the capital for a bit.

Puerto del Rosario is a very boring city. It has neither history nor charm nor a beach. That said, it does have good restaurants. I was able to order goat meat- the island’s specialty. At 10, I started to get tired. It wasn’t late, but I  had a long day exploring so I went to bed early.

Today, my goal was to visit the north side of the island. This is the most popular spot for tourists- mostly for the beaches and the surfing.

My first stop was El Cotillo. The town is fine, but the highlight is the stunning beach just to the north. It has both black lava rock and white sand, creating a wild combination of colors. This beach is awesome and worthy of all the hype.

The south side of the town has some nice sea cliffs that are worth exploring too.

My second stop was the town of Corralejo, but I decided to drive along the dirt road on the north side of the island. The road passed through a lava field along the coast. There are some good surf breaks here so the road was busy. It was here that I couldn’t believe that I was in the Schengen Area.

The road ends in Corralejo, the undisputed tourist capital of Fuerteventura. It has a beach, beach bars, restaurants and the island’s only real nightlife. It has the charm of a Florida spring break town, but it is still a pleasant enough place to stroll around.

I stumbled upon a popular restaurant called Avenida Restaurante and got a wonderful fresh fish and Canarian potatoes for lunch.

I then wandered to a beach bar and got a mojito. This place would be really fun with a group or at a surf camp!

It was now time to head to the airport. Along the way I drove through an enormous sand dune field.

Fuerteventura has a lot of open space and feels quite desolate in the non-touristy areas. The desert landscapes are stunning and unique for Europe. I feel like I saw all I could in two days but needed one more to see all the areas of the island. That said, I think you would have a better experience on the island actually doing activities such as surfing, hiking, or laying on the beach instead of driving everywhere. It was nice to see the sights, but more the most part didn’t get to truly experience any of the places. For this reason, I think Fuerteventura would be a much better slow-paced 5-day vacation than a fast-paced weekend trip.

Also, if you do go, rent the climbing gym on AirBNB and meet Hugo.

Interesting series of events yesterday in extreme northern Maine. I asked a lady to take my picture in front of this sign designating the terminus of US-1. We then started chatting and she invited me to get lunch with her childhood church friends visiting from Texas. She then invited me to her 300 person hometown, Stockholm, Maine which is a Swedish immigrant colony from the 1870’s. After a thorough tour of the town’s impressive history museum, I got a haircut.
I have a new blog post on my July trip to Costa Rica to attend the wedding of my college friends @kremerbg and Becky! If anybody is planning a wedding, I would highly recommend a destination wedding.
Celebrating 5 years with @maisie_schloss
🌋 New Blog Post 🌋 before heading to a wedding in early July, I spent 2 days exploring the UNESCO-listed forests and volcanoes of northwestern Costa Rica.
NEW BLOG POST:
🚨 Proud Boyfriend Alert 🚨! Congratulations to my girlfriend @maisie_wilen on the launch of her Spring/Summer 2023 collection at @nyfw . This show was the biggest and most spectacular one yet!
Loading Comments...
%d bloggers like this: