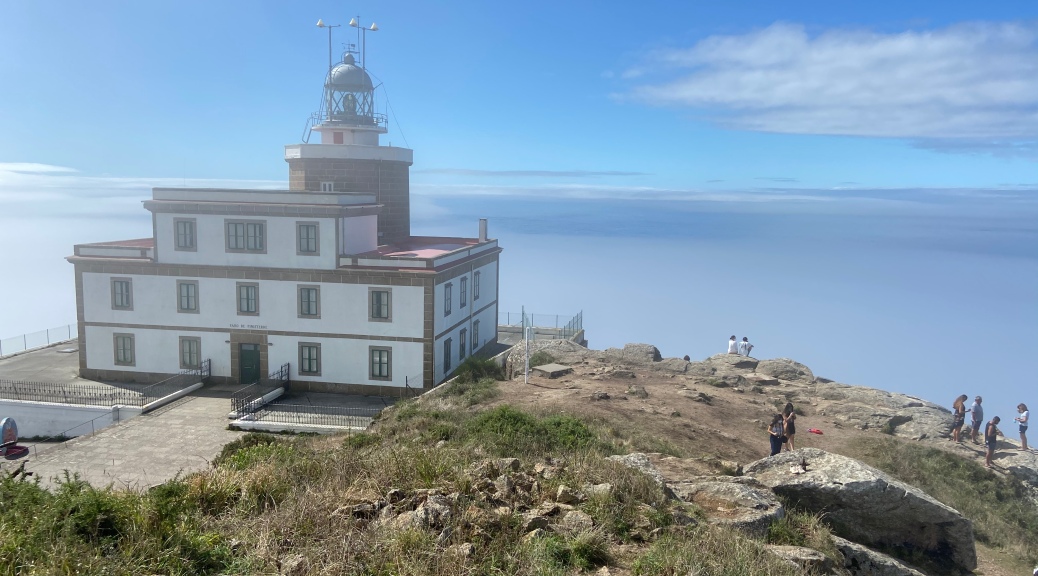 After a day and a half recovering from my Camino in the city of Santiago de Compostela, my friend Marco and I had one final day before he had to head back. Having run out of things to do in Santiago, we decided to take the opportunity to visit the ominously named Costa de Muerte: the Coast of Death. The name comes from a British paper reporting on the crazy number of shipwrecks that occur here. All ships coming from northern Europe and Great Britain bound for Africa, Asia (pre-Suez Canal) or South America pass by here.

The easiest way to reach the Costa de Muerte is on one of bus tours advertised all over town. We found the cheapest one for just 29 euros/person. The tour left at around 9 and returned at 6:30 in the evening. Not bad at all.

There were about 15 people on our bus tour plus an English-speaking guide. Almost everyone else was Spanish. When I boarded the bus, the guide mentioned that I was the first American on one of his tours this year.

The guide was long-winded (not nearly as long winded as the legendary Neuschwanstein guide), but had some nice facts to compliment the drive through the pleasant scenery.

20 minutes in we reached our first stop: a medieval bridge. I passed by one on the Camino near Melide but this one was better. After 15 minutes for photos, we were on our way.

40 minutes later, we finally reached the coast. It is funny that it took me nearly a week in Galicia before I got to see the famed coast. The hills dramatically fall into the sea.

We drove along the coast for a bit before cutting inland up a small fjord. We parked near the end and walked over to the Ezaro waterfall.

This waterfall is one of just a few in the world that falls directly into the ocean. It is the only one in mainland Europe. Another interesting factoid about this waterfall is that is used to be much more powerful, but an electric company redirected the flow through its plant, completely eliminating any water flow over the falls. They apparently used to “turn the waterfall on” during summer weekends when the tourists would arrive. In 2011, the European Commission forced the electric company to allow the waterfall to flow with at least 50% of its prior flow.

Continuing on, we drove along the winding coastal road to reach the Finsterre lighthouse. This dramatic point lies 200 meters (650 feet) above the ocean. The name Finsterre means end of the earth and in the ancient world of Greece and Rome, it was believed that this was indeed the end of the earth.

It is for this reason that the Camino de Santiago actually extends here. Marco and I were disappointed that there was no kilometer 0.000 marker in Santiago, but there was one here! We didn’t hike to this point, but we still took the picture.

Records aside, the place is stunning. The weather was quite strange. We were at the very top of a thick fog. So it was difficult to see the ocean, but at the same time it was very hot!

After exploring the lighthouse, we got lunch in the nearby town of Finsterre and then pressed on to Muxia. Muxia is another spur of the Camino and has its own km 0.000 marker. The reasons that Muxia is considered an end to the Camino is because it was here that his body reportedly reached Spain. According to the legend, the boat was turned to stone and those stones are still there on the rocky coastline that reminded me oh so much of Maine.

While Finsterre was cool, I didn’t think Muxia was all that great.

Our final stop on the tour was Cabo Vilan, or as our guide said “the villain cave”. Here, a lighthouse perched out from a dramatic rocky headland. This place was quite impressive. We then drove back to Santiago.

All said and done, I’m glad I went, but this was not my favorite day. There are no blockbuster attractions, so you are shuttled between a few quick viewpoints. It probably would have been nicer to do this in a car, but I would still wholeheartedly recommend the bus tour if you can’t drive it.

A few years ago, I wrote a guide to my hometown of Los Angeles. It was time for a refresh.
Wrapped up my long weekend in Guadeloupe 🇬🇵 with a summit of the active volcano Soufriere, the highest peak in the Lesser Antillies. After braving the rain and the winds, I was greeted at the summit with a peek into the crater where hot gasses spewed from the earth! What an adventure.
Bonjour from Guadeloupe 🇬🇵 in the French Caribbean! My Airbnb host took me on a hike along the northern tip of Grande Terre and we ended up at this blowhole!!!! Allez! Allez! Allez!
Just another day in New York City 🗽
NEW BLOG POST on my day in San Pedro Sula, Honduras. It used to be the most dangerous city in the world but is now a lot safer and remains the economic engine of Honduras.
NEW BLOG POST on my trip to Copan, Honduras 🇭🇳 to see the amazing Mayan ruins. The town and surrounding countryside are absolutely magnificent.
Loading Comments...
%d bloggers like this: