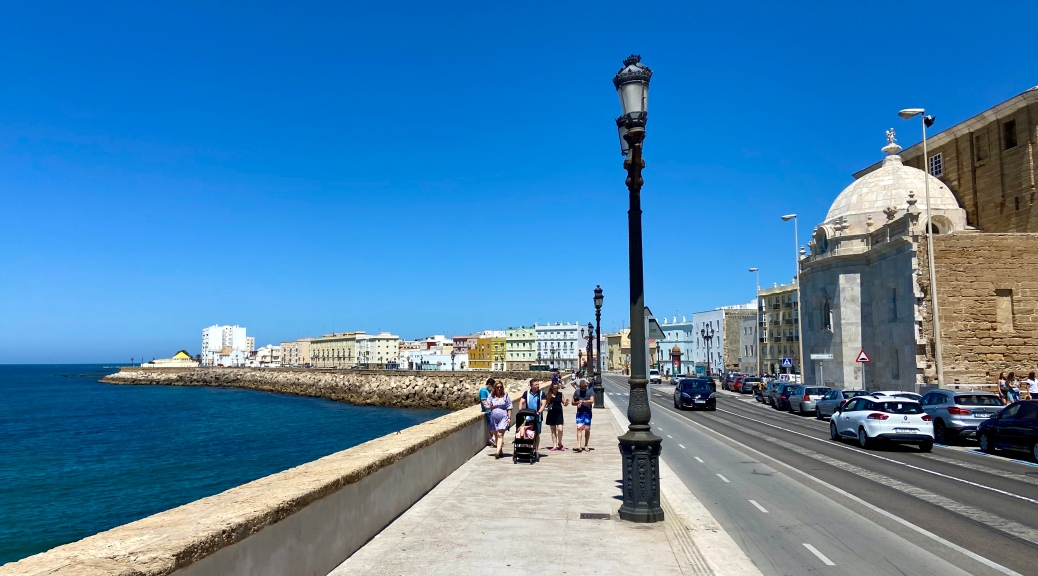 After a day in Gibraltar, my friends and I drove to the city of Cadiz. Cadiz is Spain´s oldest city; it was founded by the Phoenicians in 1,104 BC on an extremely long and narrow isthmus off Spain´s southern coast. Cadiz has had an incredible history, mostly revolving around the sailing and boats due to its geostrategic maritime location. The city is also the location of the signing of Spain´s first Constitution. Today, it has slightly over 100,000 residents.

Unfortunately for me, the city´s esteemed archaeological museum, which showcases this history, was closed when I was there, so I do not have a great knowledge of the city´s history. Additionally, the MASSIVE cathedral was also closed. My number one recommendation is to avoid visiting Cadiz on a Sunday/Monday.

After driving in along Spain´s tallest bridge, El Puente de la Constitution 1812, and parking, we walked around the old city. The first thing I thought was that this town looks just like Havana, Cuba. Both have similar streetscapes, and both have a huge waterfront walkway called El Malecon. It turns out that my intuition was correct; there is a saying in Spain (originally from a 1984 Antonio Burgos poem) that goes “Havana is Cadiz with more Black people. Cadiz is Havana with more pizzaz”. The cities are similar enough that Cadiz is used as a filming stand-in for Havana such as in the James Bond film Die Another Day.

We strolled the Malecon and ended up at the old city´s only beach- a small stretch of sand at the western tip of the peninsula (the newer parts of the city a short bus ride away do have beaches). The beach was packed and had a friendly party vibe.

Just off the shore is an island with a fort. We walked to the fort via a stone walkway. I truly felt like I was walking across the ocean.

For dinner, we visited Cadiz´s top restaurant, Casa Manteca (House of Lard). The place opened at 19:00 (a rarity in Spain). We arrived at 18:55 and managed to snag the final table.

Casa Manteca lived up to its reputation- our tapas were INCREDIBLE. The highlight was the bacon tapa.

We then walked to a square to watch the Euro2020 football match before going to bed.

One of the most famous products from this micro-region of Spain is sherry, a type of fortified wine. Many of the bodegas are located in the famous “Sherry Triangle” which includes the cities of Jerez de la Frontera, Sanlucar de Barrameda and Puerto de Santa Maria all near Cadiz.

One of the most famous bodegas in Spain is Osborne, located just 15 minutes outside of Cadiz in Puerto de Santa Maria. Founded in 1772 by Scottish immigrants to Spain, they are still a family business. The Osborne brand is a Spanish icon due to its gigantic bull billboards that grace Spanish highways. The Osborne bull is so recognizable, that it is even considered by many to be a symbol of Spain itself. The bodega also happened to offer English language tours at a convenient time, which is why I picked it.

Our tour involved a visit to the aging room, which has not been touched since the 1700´s.  Stacks of sherry barrels signed by famous figures in Spain including all the kings of Spain dating to the late 1800´s cover the floorspace. The room is covered in black mold. Despite the obvious health hazards, Osborne refuses to renovate or clean the room. This is because sherry wines require a very specific temperature and humidity. This room has it. Making even small changes to the room could ruin the sherry. Sherry wines are actually a blend of multiple years of wine (up to 10 different years). For this reason, they never have a posted year on the bottle. Therefore, renovating the room would threaten many years of product.

Osborne does have other sherry production facilities that are more modern. While sherry is produced here in Puerto de Santa Maria, it encompasses just 5% of the total production. Therefore, this ancient production facility is more of a showroom than anything. This reminded me a lot of the Yuengling Brewery. The bottles and cans proudly declare that the brand is from the town of Pottsville, Pennsylvania, but in fact the ancient Pottsville plant produces just a tiny fraction of beer compared to their modern breweries in other towns.

After the tour, we were treated to a tasting which included 4 types of sherry and their vermouth (now Spain´s most popular type of drink). The varieties tasted quite different from each other in terms of sweetness and overall flavor. Therefore, I would recommend trying numerous varieties of sherry before drawing any conclusions on the drink.

The showroom and tour was spectacular and in immaculate condition. I am surprised that Osborne does not offer more guided tours.

Back in Cadiz, we had some more time to explore. Most of the main attractions and museums were closed because it was Monday, but there were still things to see. My first stop was the Camera Obscura. A camera obscura is a contraption that projects live images onto a surface- basically a live video camera projector. Camera obscuras are quite rare- there are just 73 around in the world.

This particular camera obscura is located near the top of the city´s tallest tower. After getting a few minutes atop the tower, we were taken into the pitch-black camera room for the show to begin. Once the door was closed, the show could begin, and the camera was turned on. Suddenly, a view of the outside was projected onto a large bowl-shaped contraption in the center just like the Wicked Witch of the West spying on Dorothy. As the camera moved, the operator gave a quick description of the landmarks. The show lasted approximately 10 minutes at which point I was overwhelmed by the number of landmarks.

After the show, I decided to visit a couple of the landmarks mentioned in the show. One was the church of San Felipe Neri While there are many baroque churches in Spain, this church was actually the spot where the Constitution of 1812 was signed to inspire the Spanish troops to fight Napoleon. This Constitution, while short lived, had a major impact on the world. It created, by far, the most liberal government in Europe at the time and had provisions for human rights, voting, and land rights. The Constitution of 1812 is considered by some to be the genesis of Europe´s liberal/progressive movement.

The inside of the church Is very nice but again nothing special. The most interesting part of the church is the exterior. Various governments of Spain, plus left wing governments from nearly every country in Latin America have dedicated plaques commemorating the signing of the Constitution of 1812.

Elsewhere in Cadiz, I visited the market. The architecture is Roman in nature although I do not believe the building itself is from that time period- the building is from 1838. Unfortunately, while the market is technically open, all the stores were shut because the fishermen take Sunday off and have no fish to sell the next day (Monday).

I also visited a Roman theater, that is very mediocre when compared to those in Cartagena and Merida.

With that, it was time to head out to catch my flight from the Sevilla Airport.

Cadiz is a nice town that feels different from other Spanish towns in a good way. The streets are narrow, but neatly laid out on a grid. My personal highlight in town was the tower/camera obscura but I really wish that I was there on a different day when more things were open as the cathedral and archaeological museums are supposed to be special.

The sherry tasting was interesting, delicious and worth doing. I previously did not like sherry but now do because I now realize that there are so many types of sherry.

With an extra day, I would either spend it on the beach or visit the nearby town of Jerez de la Frontera.