The city has 4 million people- about 10% of the country’s population. Algiers is known for traffic and we hit it. Immediately.

The terrain around Algiers is hilly, so most of the roads are only 2 lane. Due to the historic architecture, it is difficult if not impossible to widen the roads…so traffic it is. There are an insane number of police working to move traffic. There is at least one cop car every two blocks. They aren’t blocking the road like on the highways; instead they are helping to move traffic.

The church was obviously built by the French, but it was still an odd sight to see in a country that’s 99.9% Muslim (the other .1% is probably Chinese). The views were sweeping. I could see the entire Bay of Algiers. There was a huge crowd of Muslims also checking out the view. The church itself was closed for an afternoon siesta, but I was told that the outside is better.

We then drove into the city center and struggled to find parking. Eventually, we ended up in a 10-level structure.

We wandered our way past the Grand Mosque into Martyrs Square. The far side of the square is a busy market. We continued past the market into the Casbah.

The Casbah is the 1,000 year old heart of Algiers. Before the French arrived the Casbah was all of Algiers. The narrow windy pathways were just wide enough for 2 people or one donkey.

The area is mostly residential, but we did pass by some commercial areas and a 15th century mosque. I have never seen anything quite like the Casbah, but apparently in Morocco there are similar districts called medinas. The Casbah used to be much larger but the French destroyed the lower half of it to build a park with a Neptune statue. At nearly every corner, there was a monument to the battle of Algiers which largely took place on the narrow alleys.

The Casbah, which has been designated at a UNESCO World Heritage Site, it is in pretty decrepit shape. Buildings aren’t quite falling over but they need help.

All of a sudden, the landscape shifted to French. Like super French. All the buildings here were built in the late 1800’s-early 1900’s by the French, who outnumbered native Algerians at the time. This was at the same time that most of Paris was being built, so the buildings look very similar.

Seriously at times I would believe someone if they told me I was in Paris. The main difference is that these buildings all have window air-conditioning units, while the buildings in Paris don’t have air conditioning.

We wandered and wandered. The French buildings kept appearing. It was crazy. Oftentimes these historic districts- especially in former colonies- are a few blocks but this was a whole French metropolis!! 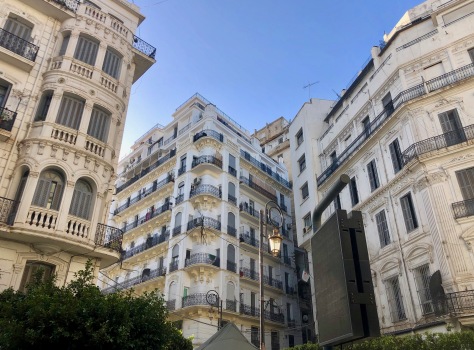 As expected there is a dark side to the beautiful French buildings. When the French controlled Algiers, Algerians were forbidden from living outside of the Casbah. In fact they couldn’t even leave the Casbah without permission from the French. With few other sources of revenue, many Algerians worked for the French especially in childcare and housekeeping. After the war of independence ended in 1964, Algerians could finally live wherever they pleased.

Around 5pm, Omar gave me the option of taking the metro back to our starting spot and drive back to the hotel or wander a bit on my own. The city was so lively and beautiful that I chose to stay.

After 90 minutes of walking around I took a taxi back to the hotel. Even though we agreed on a price and looked at the destination on google maps, the driver tried to extract extra money from me using the old “you told me the wrong destination so you have to pay extra” trick. After he drove me to the right spot (5 minutes away) he asked for double the fare (an extra $4). Even though it’s not much money, I had to bargain on principle. We got into a heated argument which resulted in us splitting the difference at $2 extra. I hate taxis so much.

My hotel wasn’t really near anything so I got dinner there. Couscous and a local non-alcoholic malt beverage. Delicious!

January 26, 2020: Museums and an Unexpected Disruption

This was unfortunately my last day, so I was determined to see all the remaining sights in Algiers.

Omar picked me up at 8 today. It was noticeably colder than yesterday (mid 50’s) and raining. This part of Algeria is actually not desert so rain is fairly common. Algeria functions on the Muslim workweek so Sunday is a workday. To accommodate all the cars going into the city, the police allowed commuters to drive on all lanes. This worked really well…if you were heading into the city. The cars trying to leave were stuck for a long time.

Our first stop was the antiquities museum, which contains Roman artifacts. The collection was astounding with statues and a room full of mosaics. Omar waited outside, so I got to be alone in the room with all these ancient priceless treasures. It was a pretty surreal feeling.

Next, we headed to the Bardo Museum. This was a historic palace owned by a Tunisian ruler. There is apparently a second Bardo Museum in Tunis. The museum was a full compound consisting of many parts, which includes active government offices. I got to visit two areas: a surprisingly comprehensive archaeological museum on prehistoric man sites in Algeria and the palace itself.

While not the plan, we got a free guided tour of the palace from a chatty lady who worked there (maybe she had the hots for Omar). We visited the furnished bedrooms, kitchen and hammam. Something interesting I saw was a door with two knockers of different sizes. The knockers made different sounds. Depending on which knocker was used, the correct person would answer the door.

Our third stop was the Jardin d’Essai. These gorgeous gardens were built by…surprise the French!

Interestingly, the garden designers decided to also include an English garden. Rather than go deeper into Africa, the gardens were used as the filming location for the 1932 black and white Tarzan.

We had one more stop in the city center: the Shrine of the Martyr. As we drove closer, we passed by a lot of police. At least 50. Omar said this was more than normal and figured that a VIP was coming.

We parked and walked about 100 meters away. The officer said that the President of Algeria was about to welcome Turkish President Erdogan here in about an hour. Therefore the monument was closed. I wasn’t even allowed to take a picture of it for “security” reasons.

Omar was really disappointed because there is a neat museum underneath. While I was disappointed too, this was completely out of our control and honestly an interesting insight into the paranoia of the government. This is the only country I have visited where taking a picture of the country’s main landmark is a “security” risk. All you can do is laugh because TIA (This Is Africa).

Now that Erdogan ruined my morning, we were trying to figure out things to do. We drove near the world’s third biggest mosque, which officially opens this year. It can hold 500,000 worshippers. Seriously, it looks more like a convention center. The minaret- the world’s largest- looks like an airport control tower. While impressive, Omar said that the money should have been built to fix social problems instead- such as building hospitals.

The mosque is Chinese built. Apparently the Algerian government and religious authority wasn’t too happy that the Chinese workers drink alcohol on the job site, but let it slide because the Chinese weren’t giving up alcohol and the Algerians couldn’t build this one their own.

We took pictures from about a mile away. Any closer and there would be police everywhere- taking pictures near police is a big no-no.

Past the mosque, we headed to a high-rise residential neighborhood and got lunch. Omar said that this is modern Algerian food. We had bread with spicy peppers and cheese, olives, bean soup and a half chicken. It was so so good!!

To drink, I got a Hamoud, a lemon soda considered to be the national drink.

With an hour to spare, we stopped briefly at a shopping mall. On the outside, there was an FC Barcelona advertisement.

Inside the mall were stores you would find at any mid-range mall in Europe: Zara, Armani, Polo, you name it. I even got a picture of a mini-Shrine of the Martyrs!

With that it was time to go. As difficult as it was getting in, leaving Algeria was a breeze.

Despite the difficulties and strange circumstances of the trip, I absolutely loved my time in Algeria. Not only did I love the north African culture and landscapes but it was surreal to be in a place this bustling and full of sights without seeing a single other tourist. Additionally, I felt completely safe.

Algeria, as Africa’s largest country, has a lot more to see. In the north, there are many other Roman sights that are apparently even more spectacular than Tipaza. And in the South is the deepest part of the Sahara that is safe. I hope to return while I still have my Spanish residency.

I have a new blog post on my July trip to Costa Rica to attend the wedding of my college friends @kremerbg and Becky! If anybody is planning a wedding, I would highly recommend a destination wedding.
Celebrating 5 years with @maisie_schloss
🌋 New Blog Post 🌋 before heading to a wedding in early July, I spent 2 days exploring the UNESCO-listed forests and volcanoes of northwestern Costa Rica.
NEW BLOG POST:
🚨 Proud Boyfriend Alert 🚨! Congratulations to my girlfriend @maisie_wilen on the launch of her Spring/Summer 2023 collection at @nyfw . This show was the biggest and most spectacular one yet!
NEW BLOG POST on my trip to colonial Kochi with its unique Jewish history and the Aleppy Backwaters, two top attractions in the southern Indian state of Kerala.
Loading Comments...
%d bloggers like this: