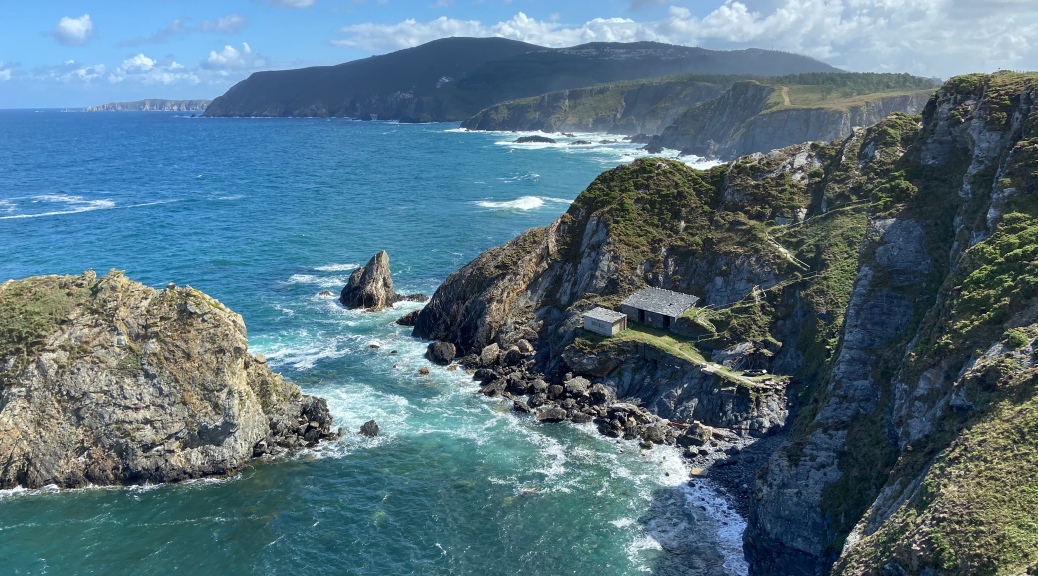 After 2 days recovering in Santiago de Compostela and one day on the Coast of Death with Marco, it was finally time to commence my north coast road trip. I picked up my rental car from the train station and headed to A Coruna, Galicia’s largest city.

The drive took about 90 minutes. Unlike historic Santiago, A Coruna is a modern metropolis full of tall buildings. The road into town was also quite dramatic with tunnels. The scale of the city was impressive.

My first stop was the UNESCO World Heritage listed Tower of Hercules. The tower is the world’s only functioning Roman lighthouse!

The name comes from a medieval legend that Hercules himself built the lighthouse after completing his Tenth Labor. His task was to slay the giant Geryon, who lived in what is now A Coruna. After slaying him, Hercules buried his head and weapons- a Celtic tradition. Then he built the lighthouse. The city seal of A Coruna depicts the lighthouse over the bones of Geryon. Very cool.

The legend is completely untrue as it was actually built around the year 100 by the Romans.

The lighthouse was turned into a fort during the middle ages, but luckily a fantastic renovation job was done between 1788 and 1791 which restored the lighthouse to its original glory…with a new better light!

Tickets to the lighthouse are normally hard to snag, but even more so in COVID times. They were only allowing 80 people in per day. Luckily for me, Spaniards are incapable of getting up early so I was able to get a ticket for the noon tour.

The bottom of the lighthouse has all the Roman foundations which have stood for nearly 2,000 years. We then ascended 50 meters up to some spectacular views.

This site is very impressive and well worth the visit- even though you will spend no more than 30 minutes in the lighthouse.

I then walked over to the nearby aquarium. The exhibits were pretty good although the descriptions were only in Spanish and Galician so I couldn’t understand much.

They had one special exhibit about sex and some of the marine animals that have unusual sex lives (sexual dimorphism, changing sexes to create a balanced population, species where males carry the babies, etc). I saw a family in front of a tank that said “Sex Machines” and I just started cracking up. This poor family probably had no clue why.

I then walked into the main part of town. The town had few historic structures and felt modern. Eventually I made my way to the “old city”. It had narrow streets and was quite lively. My teammate Andrea recommended a cheap tapas place from her days as a student in A Coruna. I got an entire meal for just 6 euros. A great deal.

After lunch, I wandered around the old town but to be honest there was little to see. The main square was nice and there’s a small fort, but it’s nothing to write home about.

Besides the lighthouse, the city offers very little for a tourist to see. It’s also for the most part not very pretty. That said, with the good food and Zara as the largest employer, A Coruna is probably a great place to live.

I spent the night in a suburb where I had a spectacularly good Venezuelan meal.

Today was my 29th birthday and I was quite excited to celebrate the day with what was supposed to be the best scenery of my entire NW Spain trip.

I started the day by driving two hours northeast of A Coruna to the Vixia Herbeira, the largest sea cliffs in Europe. Here the green mountains plunge 2,000 feet (600 meters) into the sea. I spent about 15 minute admiring the scenery and was completely alone. It is shocking how few people visit Northern Spain.

Next, I headed to Cabo Ortegal (Cape Ortegal). This point is considered the boundary between the Atlantic Ocean and the Cantabrian Sea (Bay of Biscay). The scenery was incredibly dramatic. The Vixia Herbeira cliffs can be viewed from a lower elevation, revealing just how steep they are. This was my favorite stop of the entire day.

There are a few good hikes in this area, but my feet still hurt too much from the Camino to do anything.

Continuing on, I drove 45 more minutes to reach another set of gorgeous sea cliffs near Do Picon beach.

Here, there is a beautiful bench overlooking the cliffs and the aquamarine sea. The name of the bench is “The Best Bank in the World”, which stems from the Spanish word for bench: banco. Indeed it is far better than any bank in Spain!!! Admittedly the bar is set pretty low.

20 minutes east of this is Estaca de Bares, the northernmost point of Spain. This spot was not as dramatic as Cabo Ortegal but still a thrilling hike. The trail skirts its way to the point with 300 ft (100 meter) cliffs on each side! Wild. Like all the places visited today, the pictures fail to capture the true scale of the place.

Continuing east, I stopped for a quick lunch in the town of Xove before reaching the famed Cathedral Beach. This is one of the most photographed spots on the entire coast of Spain because of the pillared sea cliffs. Unfortunately, the cliffs are only accessible at low tide, so I saw a nice beach and some strong tides!

With that I headed east to Asturias!

The north coast of Galicia is truly stunning. The green scenery and the enormous cliffs are world-class. The best part is that this place is completely undiscovered by foreign tourists- although Spaniards know. With the notable exception of the Tower of Hercules, this part of Galicia offers little in the way of history, but that’s fine. Not every place has to be a history lesson.

Today marks 1 year living in New York City! What a ride it has been. 🍎 🗽 🍕
Happy October from me and this Lady Liberty made of 144 jack-o-lanterns 🎃
NEW BLOG POST on my late July trip to Turks and Caicos, home of the most spectacular water. To read, click the link in my bio or visit BryceCaster.com
Interesting series of events yesterday in extreme northern Maine. I asked a lady to take my picture in front of this sign designating the terminus of US-1. We then started chatting and she invited me to get lunch with her childhood church friends visiting from Texas. She then invited me to her 300 person hometown, Stockholm, Maine which is a Swedish immigrant colony from the 1870’s. After a thorough tour of the town’s impressive history museum, I got a haircut.
I have a new blog post on my July trip to Costa Rica to attend the wedding of my college friends @kremerbg and Becky! If anybody is planning a wedding, I would highly recommend a destination wedding.
Celebrating 5 years with @maisie_schloss
Loading Comments...
%d bloggers like this: