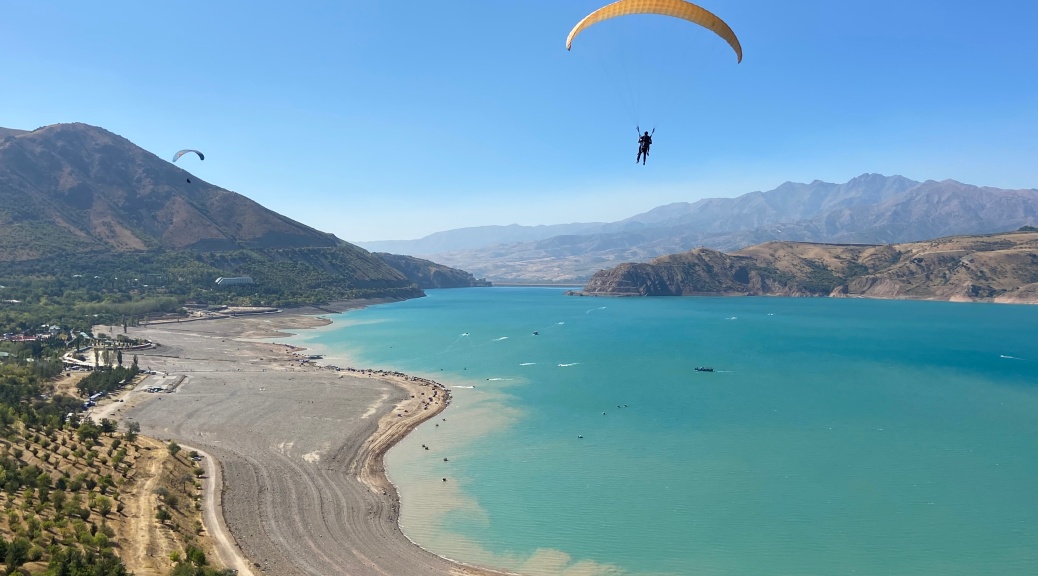 Tashkent is the capital of Uzbekistan and the largest city in Central Asia. It is not considered a highlight of Uzbekistan (that title belongs jointly to Samarkand, Bukhara and Khiva), but the international airport is here so nearly all tourists to Uzbekistan spend time here. The city is ancient, but its historic districts were leveled in an earthquake in 1966. Therefore, the city feels Soviet.

After visiting Khiva, Karakalpakstan, Bukhara and finally Samarkand, we were ready for the grand finale.

My friend Paul and I actually visited Tashkent at the beginning of our trip for a half-day. There, we visited many of the city´s expansive parks, rode the impressive metro system and visited the government center.

From Samarkand, we caught an 7am train to Tashkent. Our train was the high speed Afrosiab, which goes at 250 kilometers/hour (180 mph). The train was a Spanish Talgo which reminded me so much of the AVE train in Spain. The train zipped across the countryside.

Once in Tashkent, we caught a Yandex (Russian taxi app) to our hostel. The fare was 7,500 Uzbek som (about 70 cents). There, we checked in and found out a place to get a COVID test. The testing center was extremely well-run, and we were out in 15 minutes.

We then caught a taxi to take us to the market. Paul started chatting with the driver in Russian. They ended up having a great conversation that I could not understand. Anyways by the end of the ride, the driver refused our payment. He said that he cannot take money from a guest in his country. The hospitality of Uzbeks is incredible.

The Chorsu Bazaar is humongous. Its central hall is a circular Soviet building where hundreds of meat sellers congregate. Surrounding it are vegetable, fruit, and bread sellers. The vendors were not as chatty as in Bukhara (the place was much busier), but one bread vendor showed us his over and took out a fresh hot piece of bread for us. It was perhaps the best bread I have ever had.

Next, we walked to the city´s main mosque. The mosque had a museum which included a 7th century Quran brought to Uzbekistan by Timur. This was a Friday, and many people were coming to the mosque for the Friday prayers. We noticed a humongous police presence- at least 30 officers were patrolling the mosque.

Even though the country is nearly 100% Muslim, the staunchly secular government is afraid of Islam. The government is afraid that extremists could could one day turn Uzbekistan into the next Afghanistan (before the Russian invasion in the 1800´s, the people of Central Asia were just as conservative/observant as the people in Afghanistan). The governments are also afraid that the rising influence of Islam threatens their power.

In general, the younger generations in Central Asia are more religious than older generations. This is not surprising given that the Soviet Union more or less banned religion. Now, Muslim countries in the Middle East with money can access and influence the previously inaccessible Central Asian countries. In Bishkek, Kyrgyzstan, Turkey built the largest mosque in Kyrgyzstan (a replica of one in Ankara) and provides free Islamic schooling to anyone in the country. Qatar just finished building the largest mosque in Dushanbe, Tajikistan.

The influence has had real effects. My Kyrgyz guide there said that children at these schools are being taught that men can beat their wives and insult their mothers. The imam who presided over the wedding I attended in Dushanbe told the crowd that women are created to serve their husbands. Obviously, many other less controversial topics are also taught in these schools, but my tour guides (who regularly interact with people from all over the world) are visibly upset by this trend.

The governments in Central Asia are mostly run by the former Soviet bosses, so they are actively fighting back against religious influences to consolidate their power. In Tajikistan, it is illegal to enter a mosque before the age of 18.

Central Asian countries are still far more secular than the Middle East – the Soviet culture of drinking alcohol is not going away soon, most women do not cover their heads, and the Central Asian leaders are all very securely in power. However, I would not be surprised if 20-30 years from now, there is an Islamist uprising somewhere in Central Asia.

From the mosque, we took another taxi to our favorite lunch spot, the Central Asian Plov Centre. Plov is a food made from rice mixed with stock, meat and vegetables. Plov is the national dish of Uzbekistan and is quite popular all-over Central Asia and the Russian-speaking world. Through the Abbasid Caliphate in the 600´s and 700´s, the dish spread all over the known world. It is therefore no surprise that there are many similar rice dishes that all start with the letter p: pilaf (Europe) , polu (Xinjiang), pullao (India), paella (Spain), and pelau (West Indies).

At this gigantic landmark Central Asian Plov Center, plov is made in a 2-meter wok that chefs stir with shovels. Their plov is made with horse meat. It was delicious. Probably the best meal in all of Uzbekistan.

We then wandered through the leafy center to the National Museum. This was a Soviet-built museum that covers Uzbekistan´s history from the very beginnings of human settlement. The highlight was the Buddhist artifact collection from the pre-Islamic period when all of Central Asia was Buddhist. Additionally, I loved the propaganda-laden section about the modern country of Uzbekistan. The museum was not as good as Tajikistan´s National Museum, but it was still fantastic and a great way to recap everything I learned from traveling through the country.

For our final activity of the day, we visited the old presidential palace of Islam Karimov, the first president of an independent Uzbekistan. The palace itself is not open but the grounds are. As you enter, two soldier salute as you walk up to a statue of Mr. Karimov. Photos with the statue are allowed and encouraged. Just make sure not to do anything stupid because there were MANY soldiers and cameras watching you.

Back at the hostel, Paul and I met a fellow traveler from the Netherlands and invited her to dinner. In turn, she invited us to join her paragliding excursion tomorrow. We accepted.

The next day, the three of us were picked up by our Advantour driver. I used Advantour to book our train tickets around the country since they can purchase tickets before general public can. The agency is very expensive but professional.

The driver had a funny playlist that he said he personally picked out from years of listening to his brother´s extensive Western music collection. The playlist was quite eclectic and included Aicha by Outlandish, Spice Girls, Nelly, and Foreigner. I loved the playlist because the driver truly loved each song.

The drive to Uzbekistan´s sole mountainous region northeast of Tashkent was supposed to take 1.5 hours but took an hour longer due to the road being closed for VIP´s- an annoying reality of life in developing countries. Eventually, we reached a very fancy ski resort called Amirsoy. It was strange to see a ski resort in a desert country. In fact, all the foliage on the mountain looked like it belonged in the desert.

We took the brand-new gondola up to the top and took in the views.

Then we drove to another ski resort where we rode a Soviet chairlift.

Finally, it was time to paraglide. The spot overlooked a large bright blue reservoir known as Charvak. After waiting our turn, we both took off and soared over the scenery! We could see a “beach” resort, an oligarch´s home and the mountainous border with Kazakhstan.

After a delicious lunch, we headed back and rested up for the flight home. It was a great day and a great way to end the monthlong Central Asian adventure.

Had the best weekend celebrating the wedding of my cousin @jjacobs369 and @elizabethrb !!! Loved getting to reunite with family.
At long last, my Dubai blog post is here! While on the surface, Dubai might seem like a Middle Eastern Las Vegas without gambling, there is actually a lot more going on. I spent a lot of effort on this post. I hope you enjoy it.
NEW BLOG POST on my trip to the World Expo in Dubai. This was without a doubt the grandest and most spectacular event I have ever attended. Imagine Epcot but with 191 countries.
5 years of the BCaster AHess Friendship Adopt-A-Highway in Albuquerque, New Mexico. Always a pleasure cleaning the road with you @andhess
Houston, we have a problem!
Had the best time in Newport, Rhode Island at the wedding of @ay_ok and Anna!
Loading Comments...
%d bloggers like this: