This is the third portion of my 2016 Thanksgiving Road trip:

It was Saturday evening of Thanksgiving weekend 2016. So far, my dad and I have traveled from Durango, Colorado through the San Juan Mountains and into Utah before dropping down the Moki Dugway into Mexican Hat and crossing the San Juan River into the Navajo Nation.

30 minutes southwest of Mexican Hat, is the legendary Monument Valley. The approach from the east along US 163 is one of the most photographed spots in the West.

In a campground a mile east of the main junction in Monument Valley, we met our AirBNB hosts Mark and Susan. Mark is Navajo while Susan is white. Mark named all the formations to us before explaining that our accommodations were a few minutes away. We got in our rental truck and followed him from Utah into Arizona and over to our AirBNB hogan.

Hogans are traditional Navajo houses made of wood and mud. Nowadays, they are actually quite rare because it is difficult to find the lumber to construct them. Our hogan was a female hogan and was nine-sided to represent the nine months of pregnancy. 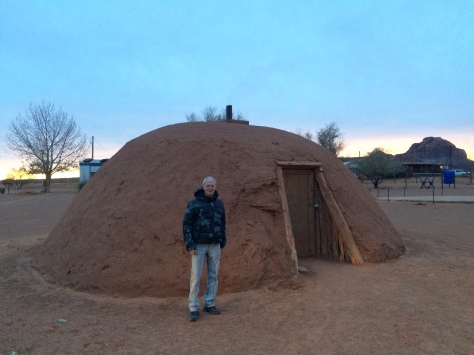 While there is no electricity or electric heating, there was a stove that we could light with firewood. Mark conveniently would sell us firewood for $5. Since it was around 30 degrees outside and was certainly going to get colder overnight, we bought the firewood. There were candles inside for light. 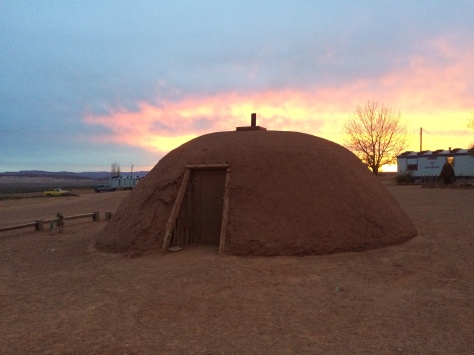 While the Navajo would sleep on the ground, this AirBNB hogan had two queen beds with three very heavy blankets. Even if the heat went out, we were going to be warm. The candlelight setting would actually be quite romantic had I not been here with my dad. This actually follows a strange/funny precedent on trips with my dad starting with our trip to the Amazon where we accidentally booked a couples’ retreat.

With nothing to do in the hogan, we headed over to eat dinner. We had two choices- both with poor Yelp ratings. We picked Goulding’s because it was closed for breakfast and we could try the other place for breakfast.

Goulding’s was a 1920’s trading post set up by a white man named Harry Goulding and his wife, “Mike”. His wife’s actual name was Leone, but he couldn’t pronounce it so he called her Mike. He would sell goods to the Navajo people in exchange for crafts such as rugs and baskets. The trading post wasn’t doing so well, but in the 1930’s they heard about the movie industry in Hollywood and thought that Monument Valley would be a good spot to film Westerns. With their last $60, they traveled to Hollywood and convinced John Ford to film his next Western in Monument Valley. That movie was “Stagecoach” starring John Wayne. Ever since, Monument Valley has been a popular filming location and many of the local Navajo have been cast as extras partly due to their incredible horsemanship.

We ate a mediocre meal of frybread, hamburger steak and a trip to the salad bar. We then stopped in the gift shop- the “trading” part of the trading post. All the handmade rugs and baskets were very expensive- hundreds to thousands of dollars. I bought some socks while my dad chatted with the cashier. She explained that Navajo lineage is maternal. The women keep the house and in the event of a divorce, they keep everything from the relationship. Women also pass down clan lineage to their children.

Navajo cannot date or marry anyone from not only their clan, but also the clans of their father and both grandfathers. This is actually a major problem because most people who live in an area are all part of the same clan and are considered related. There are around 130 clans, but 4 are very large and contain the majority of the tribe’s population. Many schoolchildren travel very far- up to 50 miles- to go to high schools so they can date and many Navajo will only date outside of the tribe to make sure the clan issue never comes up.

Our new friend also explained that there are very few hospitals on the Navajo reservation.  This is because there are few Navajos that become doctors and even fewer that then choose to return to the reservation where they rarely receive compensation for their services. In Monument Valley there are two doctors that run weekly clinics- one is Navajo, while one is not. If someone gets into a health emergency, they will get driven or flown to Cortez- 90 minutes away and off the reservation. Time is generally cheap for the Navajo.

Other than roadside stands with handpainted signs and tours, it seems like all of the successful businesses in the Navajo Nation are run by white people with Navajo staff, which doesn’t seem right. Throughout 6 trips through the reservation, I have struggled in business dealings/bargaining situations with Navajo people and have yet to find a Navajo restaurant on the reservation with good food and good service.  I have been trying to understand why this is the case and have come to a few conclusions.

First, the white people who come to the Navajo lands to set up businesses probably have more starting capital than most of the locals do- its very hard to make something out of nothing. Second, the Navajo don’t really need to buy many things since they are more self-sufficient. Therefore, many businesses cater to the largely white/Asian tourist population. The white businesses understand those cultures better since they come from them.

Third, there appears to be a major cultural difference between the Navajo and the white people and it does not appear that running businesses is an integral part of Navajo culture. Unlike most other native tribes including the nearby Hopi, the Navajo have traditionally been nomadic and generally avoid living near other people. They live primarily off the land instead of off each other. There aren’t any stories of Navajo children walking door to door selling goods like newspapers to their neighbors because their neighbors are too far away and there’s nothing really to sell. Instead, they grow up learning their traditions such as how to dance, hunt, and make crafts. This skillset does not really translate into monetary wealth and business acumen. As a result, many Navajo people are very poor and live in difficult living conditions by Western standards.

It is possible and likely that many Navajo do not care about monetary wealth and living standards set by people that have attacked them and their culture for over 200 years. Rather many Navajo value spiritual growth and stewardship of the land, something that white people value little.

At 8pm, the trading post showed a screening of “Stagecoach”, the first movie ever filmed in Monument Valley. The scenes from Monument Valley were obvious. While filmed in Navajo country, the movie was set in Apache country in the Chiracahua Mountains, where I coincidentally went last Thanksgiving. There was a really great chase scene where the Apache (Navajo actors) nearly chased down the stagecoach.

After the movie, we returned to the Hogan, lit a fire and went to bed.

The next morning, we woke up surprisingly warm. The fire went out overnight, but the blankets were great. I stepped briefly outside into the 20 degree weather where it was lightly snowing. A random dog walked up to the hogan to greet us.

We drove over to the other restaurant, the View, but it turned out there was a $20 to get to the hotel because it was part of the Tribal Park. Not wanting to spend the money, we drove 30 miles south to the desolate town of Kayenta, Arizona and got some food in a gas station. Since there was no running water in the Hogan, we also brushed our teeth in their gross bathroom.

From Kayenta, we drove for an hour east through the Navajo reservation along the US 160. The land was red as we passed through more towns with interesting names including Mexican Water and Red Mesa. Eventually, we reached a town called Teec-Nos-Pos where we cut north to reach the Four Corners.

The entrance road is from the New Mexico side. After paying the Navajo Nation $5, we drove up to the monument- a large plaza with room for Navajo merchants to sell tchotchkes. However, there were only 2 merchants- it is busier in the summer.

In the middle of the plaza is a bronze circle that marks the meeting point of the 4 states: Colorado, Utah, Arizona and New Mexico. There is controversy as to whether the monument was places in the correct spot. In 2009, the US Geodetic Survey admitted that the monument was 1807 feet east of where it should have been due to a surveying error. However, a Supreme Court case determined that despite where the Four Corners Monument should have been placed, its current location is the official boundary of the four states.

My dad and I then took really awkward pictures in all four states- there is no way to get a good picture here. 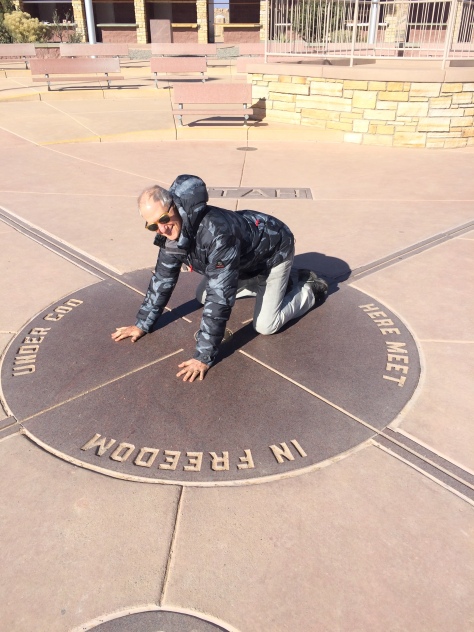 Continuing further east into New Mexico, we reached a large rock called Shiprock. We actually were able to see Shiprock all the way from Yucca House in Colorado a few days ago. The lone rock is sacred and it is illegal to approach it. We were able to get out truck fairly close and walk to a nice viewpoint.

Another hour of driving took us to the town of Farmington, New Mexico. Off the reservation, it was shocking to see how much nicer this town was than any of the surrounding towns. All the businesses had professionally made- not handpainted- signs. Still, the town looked depressed, as most of Main Street was vacant.

We stopped at the Three Rivers Brewery, the coolest place in town. In addition to a brew pub, they have a pizzeria and a tap room. They are planning on opening up a lounge too. Since we were in New Mexico, I made sure to order some green-chile chile. It was really spicy! I also got a flight of beer- their state fair-winning cider was spectacular.

Ten minutes past Farmington was the town of Aztec, home of the Aztec Ruins National Monument- a 400-room pueblo. Like all the other ancient ruins in the area, this site was also abandoned around the year 1300. Unlike the other sites I have seen, this site was built by the Chaco people, a subset of the Anasazi who had a very large pueblo 100 miles south. The unique architecture here is why UNESCO declared Aztec Ruins a World Heritage Site.

The trail then goes through a few doorways and hallways before ending with a sweeping view of the site.

After the ruins, we drove briefly through the town of Aztec before driving back up to the Durango Airport, completing an 851-mile loop of the Four Corners Region!

Perfect autumn day exploring the Storm King Art Center!
One week down as a “business professional” in New York.
My first (of many) Central Park runs. So amazing to live near this gem!
My parents got a new puppy today. Welcome Ringo Caster!!! #schnauzer
Gainfully employed. Day 1 ✅
Incredibly special to watch my best friend from college walk down the aisle. Congratulations @andhess and @shelbylindblad
Loading Comments...
%d bloggers like this: