Back in December, I saw a $400 roundtrip flight from Los Angeles to London for the St. Patrick’s Day long weekend. I was on the verge of receiving a promotion at my job and vowed to take the flight if I got the promotion as a way to celebrate. The promotion happened and I booked the flight.

Having never been to London before, I made the decision to attempt to hit as many touristy places in Central London as I possibly could in my 51 hours. That way when I return, I could focus on more off-beat locations.

On Thursday March 16th, I headed to the airport for my 6:45 pm flight on Virgin Atlantic. At the check-in counter, I asked for a better seat. The lady said to check at the gate an hour before the flight. There, I asked again and was given an upgrade to the bulkhead window seat aka the best coach seat on the plane!

The flight took about 9 ½ hours. I slept for 2 hours, watched Harry Potter 8 and chatted with my seatmate Pepper.

Finally, we made it to London. We took a scenic loop above the city before landing at Heathrow Airport. After quickly clearing security, I hopped on the Heathrow Express train which took an easy 15 minutes to reach Paddington Station in central London.

There, I was met by my college friend Andrew. We walked through Paddington Station to a pub called the Victorian. There, we got fish & chips and a beer.

We then walked through Hyde Park, a large and spacious park that has lots of horses. Obviously there are historic reasons for it, but I think having horse trails in the middle of a huge city like London is pretty strange.

At the southern end of the park, we checked out the Albert Memorial and the Prince Albert Hall both named for the husband of Queen Victoria (she has a big presence here).

Andrew and I then walked through the South Kensington neighborhood and wandered our way to the Victoria and Albert Museum. Known as the V&A for short, this museum is probably the world’s largest collection of random yet impressive artifacts. Each room had a theme. One room was costumes. One was Turner paintings. One was jewelry. One was iron-works. One was model casts of famous sculptures. One was Persian artifacts. The list goes on and on and on. To fully explore this museum would take a day or more!

We then went to the Science Museum, which I thought was informative but not nearly as engaging as some of the science museums here in the US. My favorite exhibit was on earthquakes.

Next to the Science Museum is the enormous Natural History Museum. The museum contains millions of different animal specimens- some were even collected by Charles Darwin. The cavernous museum was undergoing a renovation so getting around was difficult. My favorite exhibit was the dinosaur display, which was far more academic than any other display I have ever seen at a museum.

As we left around 5:30, I muttered to Andrew that we have probably seen more “things”-many with cultural or material significance- today than in any other day of my life.

From South Kensington, we walked 10 minutes east to the neighborhood of Knightsbridge, where I checked in with my host family- I was hosting their daughter at my house in LA while she was taking an acting class, so this was “only fair” that I stay with them in London. They lived in a row-house (something you don’t see much in the US) on a beautiful park. It was 6 stories tall, but each story had at most only 2 rooms.

I definitely won the housing lottery because my host family could not have been more gracious. They made me a delicious chicken for dinner before heading off to see a play.

Based on a recommendation, Andrew and I went to Harrod’s a luxury department store in Knightsbridge that happened to be 2 blocks from where I was staying. Having been to nice department stores and shopping areas like South Coast Plaza and Rodeo Drive, I had low expectations. However, Harrod’s blew my mind. The food hall was out of this world, each room probably had millions of dollars of things inside, and they had an Egyptian-themed escalator. 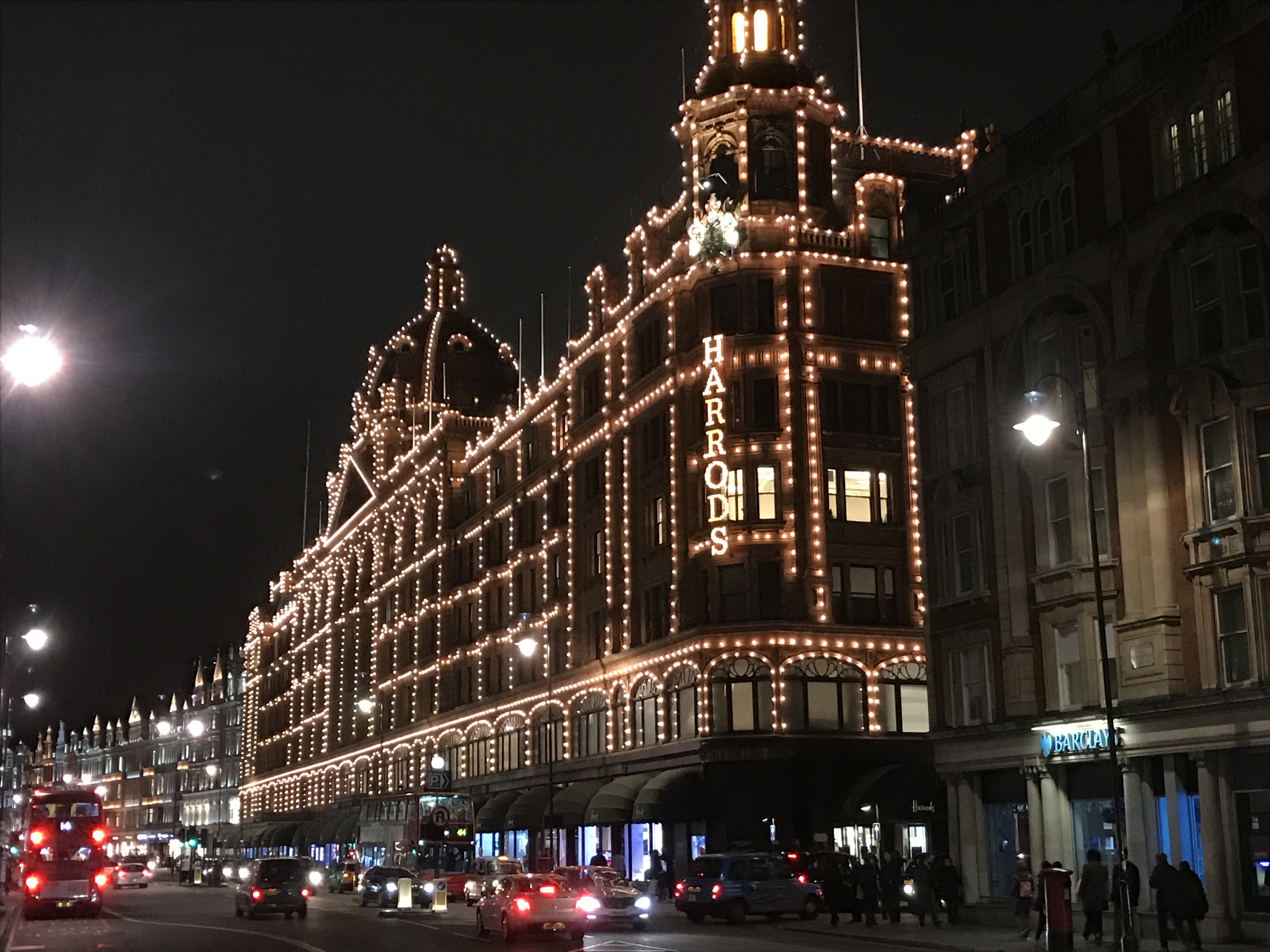 Since it was St Patrick’s Day, Andrew and I decided to go out. St. Patrick’s Day is not a huge event in London (the Irish and English don’t exactly get along), but we still decided to head to London’s most famous Irish bar, Waxy O’Connor’s. The six-story bar (no joke) is located in Picadilly Circus, the cheesy touristy center of London, which feels a lot like New York’s Times Square. Amongst the mix of touristy t-shirt shops, a Hershey’s shop, and a Ripley’s Believe It Or Not museum, there was a huge line stretching down the block. We waited for about 20 minutes before being let into the PACKED bar. It was so packed that we could barely move around. We didn’t even try to get a drink. There must have been at least 1,500 people in the bar. 15 minutes of wandering later, we had seen what we wanted to see and went over to the neighborhood of Shoreditch to get a quick beer with Andrew’s girlfriend Shelby who happened to be in London for work. By 10pm, I was exhausted, said goodbye to Andrew, and headed back to Knightsbridge for a big day tomorrow.