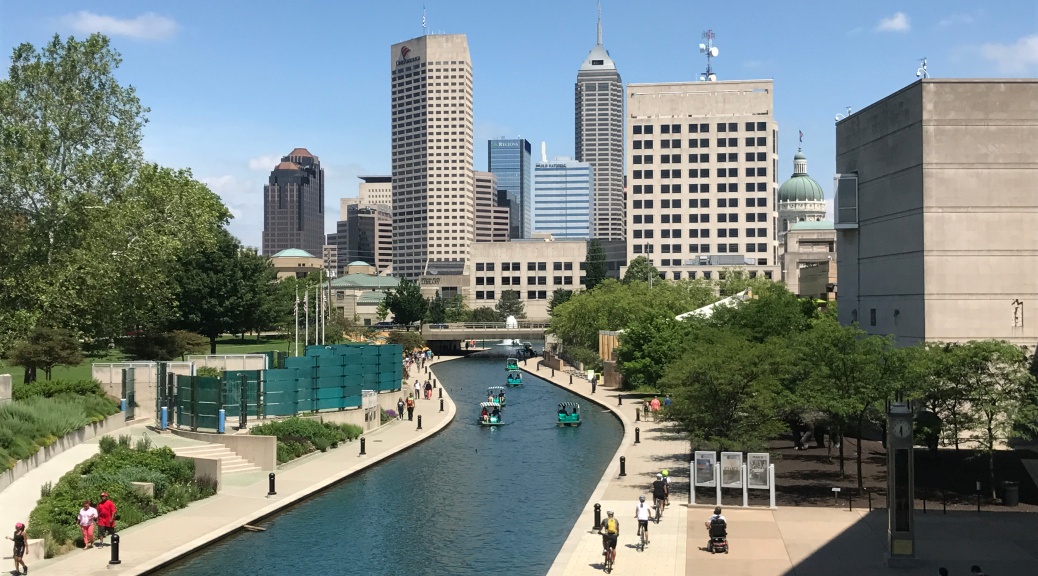 The Indianapolis 500 aka the Indy 500 is the highest attended single-day sporting event in the world and is called “The Greatest Spectacle in Racing”. Exact figured are unknown, but the crowd is estimated to be nearly 350,000 strong.

The race takes place over Memorial Day weekend as it has for the past 101 years. Since 1974, it has been on the Sunday of the long weekend which makes it easy to travel to.

Flights over Memorial Day were expensive, but I was able to find a one-way direct from LA to Indianapolis for $160. For the flight back, I left early Tuesday morning and was able to get the “saver” rate on American Airlines points so it only cost me 12,500 points.

I arrived at the airport an hour before the 9 PM flight and breezed through security and onto the plane.

The plane landed at the ungodly time of 3:55 AM which arguably does not make this a red eye. I picked up the rental car, but due to the 500, Enterprise only had pick-up trucks left. Because pickups are so inefficient, Enterprise gave me a free tank of gas.

I left the airport and headed out towards the city in the darkness while blasting “Truck Yeah” by Tim McGraw on repeat. Nothing was open, so I tried to nap unsuccessfully in the bed of the pickup.

At 5:30 AM, the sky was staring to brighten and I knew I had no shot at sleeping, so I looked for somewhere to eat. Yelp led me to Long’s Bakery, an Indianapolis staple that reportedly has the best donuts in the city. Even at 5:30, there was a short line. I ordered two donuts: 1 glazed yeast (their specialty) and an apple fritter. Both were amazing. 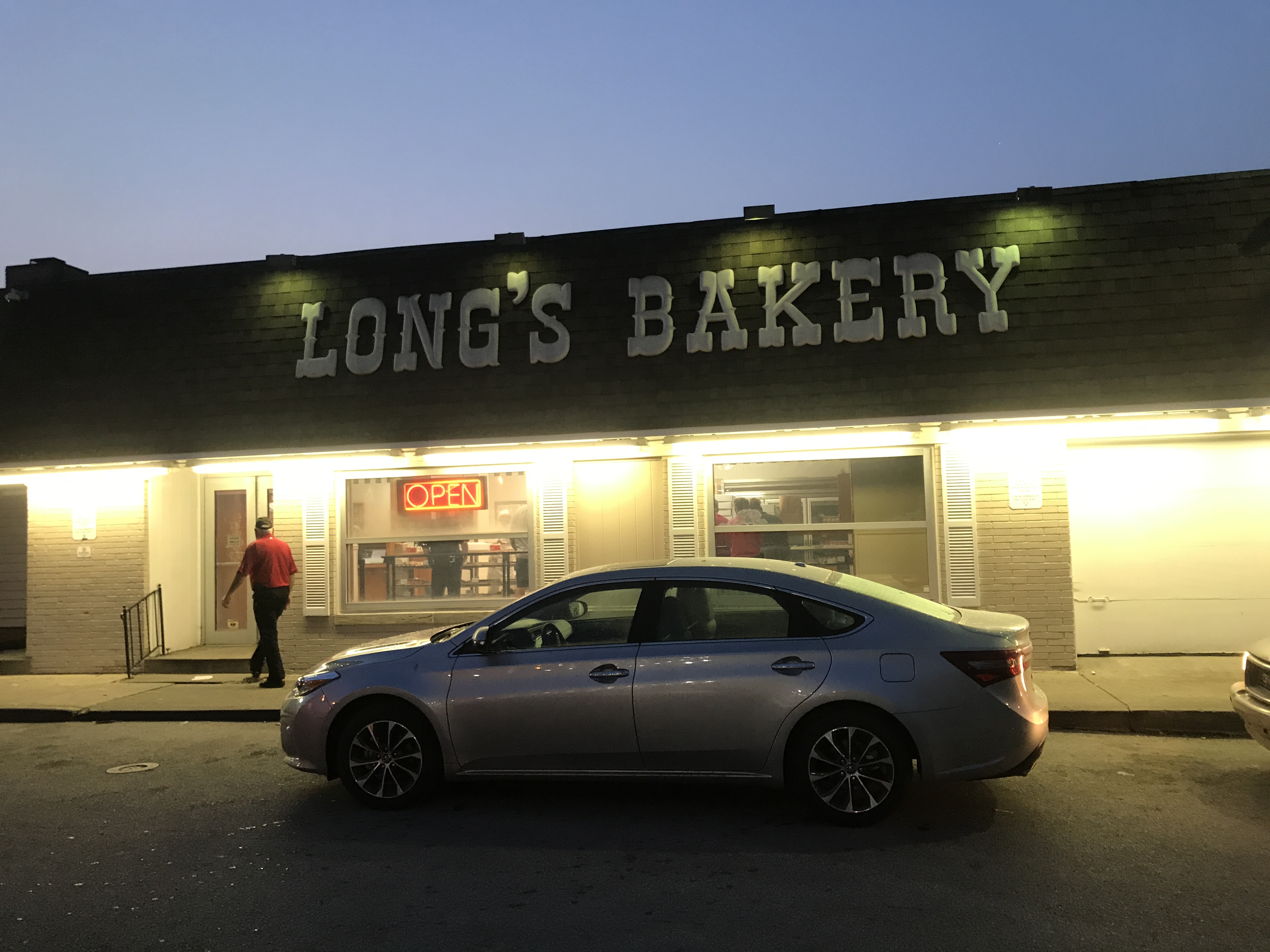 Still hungry, I drove through downtown to Milktooth, an upscale brunch spot that is considered to have single-handedly gentrified the block it is located on. Unfortunately, when I got there, they were only serving coffee and pastries. Since I don’t drink coffee, I settled for a rhubarb danish, which was incredible.

It was still only 7:10 AM and nothing opened until at least 9, so I went for a run through Garfield Park 10 minutes south of Downtown. They had a sunken garden and lots of open grassy fields- something you don’t see in LA. Finally, after the run, I was able to pass out for an hour in the truck.

I then drove downtown. The novelty of blasting “Truck Yeah” in an actual pickup truck had not worn out. I parked at the zoo for $7 for the day and walked across the White River to the State Museum.

The Indiana State Museum is one of my favorite museums of all time. The first floor is dedicated to the natural history of Indiana starting with the formation of earth all the way up to the evolution of the various biomes in the state. They have a great collection of fossils from various epochs. 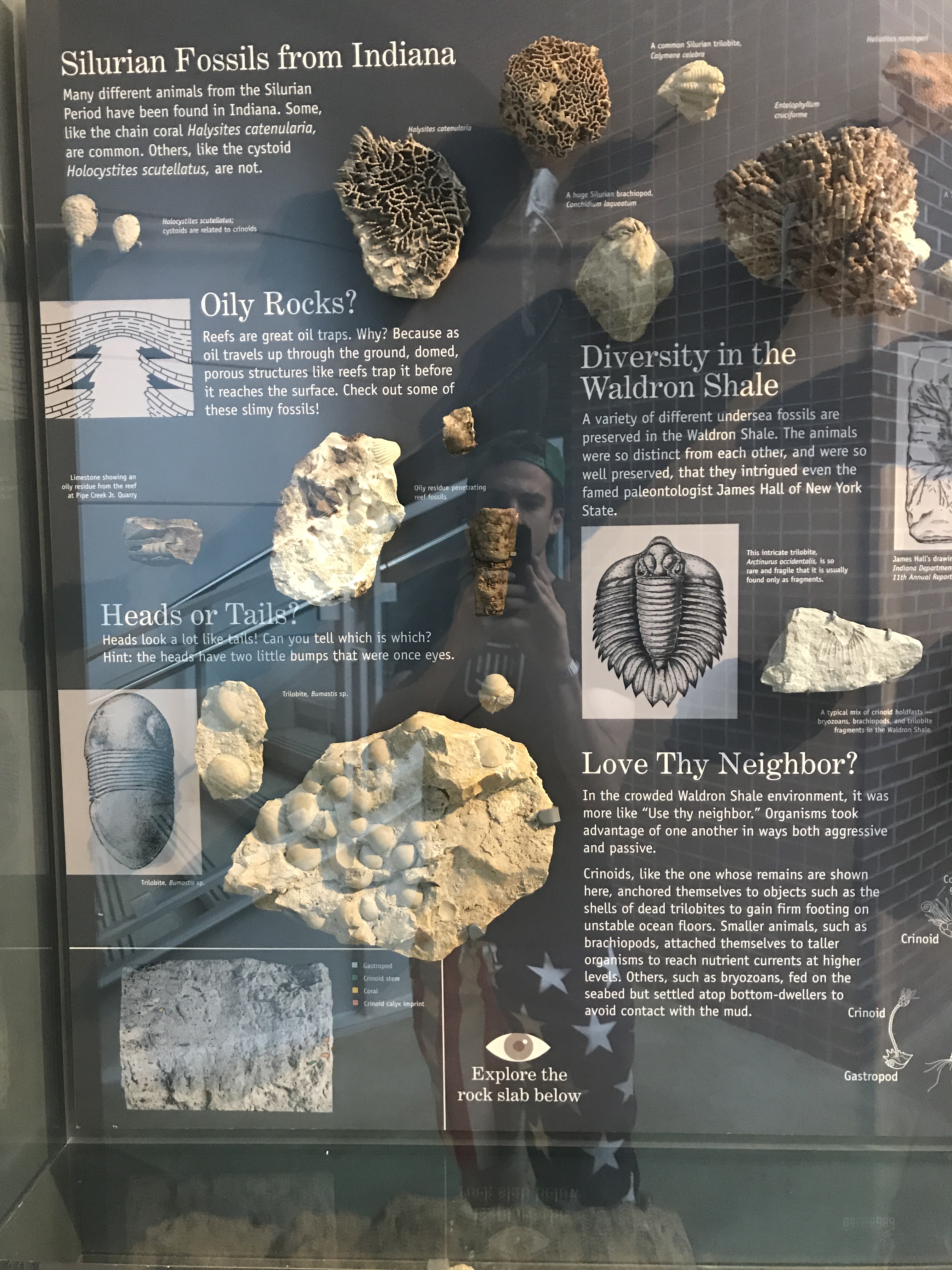 The second floor of the State Museum tells the human history of Indiana starting with the first movement of Europeans into the area. From the beginning, the white people of Indiana have not gotten along well with others. With the exception of various frontier posts including Vincennes which was actually the site of a key Revolutionary War battle, Indiana was considered Indian land. Soon after the War, American soldiers and settlers clashed with the Indians in multiple battles. This resulted in treaties giving Indiana to the Whites who then settled the area.

Unlike other Midwestern states that had Catholic and Quaker influences, Indiana had a uniquely strong Protestant German and English influence including many settlers escaping the confusing land inheritance laws of Kentucky. This included the Lincoln family- Abraham was about 7 years old when they moved to Indiana. Still to this day, the White population of Indiana is the highest among Midwestern states at nearly 85% (in 1950, Indiana was 96% White). More than 60% of the state’s African American population lives in just two counties. These demographics certainly play a role in the state’s politics – it is far more Republican than its Midwestern neighbors.

After the Civil War until the 1970’s, Indiana entered an era of great economic prosperity and was a center of heavy industry. Since then larger companies have started to move out. Indiana is at the center of the so-called “Rust Belt”. Industry and farming are still the key industries- factories and smokestacks are still visible all over Indianapolis but there is much less here than was there before. However, in the last decade, the city has been undergoing a major resurgence and is now a very nice place to live and work.

It was now nearing 11 AM and it was time for the Indianapolis 500 parade! I walked downtown past the Soldiers and Sailors Monument to a busy street corner. There, I stood behind a lady in a power chair to watch the greatest display of Midwestern-ism and Americana I’ve ever seen.

Before the parade, thousands of jort (jean short) and t-shirt clad Hoosiers worked their way to their lawn chairs alone the 2-mile long parade route. At 11:30, the parade began with the band X- Ambassadors playing their hit “Renegades”. Then various elected officials and celebrities including the Governor of Indiana, Mayor of Indianapolis, a Holocaust survivor and a pro-wrestler were driven in old Indy 500 pace cars (aka an Indiana pacer).

Then came marching bands from high schools and military bases all across Indiana. They played exclusively patriotic songs and military marches such as “My Country Tis of Thee” and “Anchors Aweigh”. Sprinkled in the mix were large floats.

Next were representatives of all the ethnic groups of Indiana. People were dressed in traditional clothing from their native land- probably 50 countries were represented. The largest contingency was the Scottish, but there were also strong Chinese, Nepalese, German, and Mexican showings (Mexico is the only foreign government to have a consulate in the state).

Then came more bands and then finally the drivers in the 101st running of the Indianapolis 500! They came 3 at a time, representing the row in which they would start the race. The racers all rode with their significant others and children. Most of the racers had really attractive wives and girlfriends that drew plenty of comments from the men standing next to me. Pippa Mann, the lone female driver, rode with her husband. The crowd cheered loudly when a past champion would ride by. The loudest cheers went to 3-time champion Helio Castroneves as well as the “rookie”, 2-time Formula One World Champion Fernando Alonso, who decided to skip the Monaco Grand Prix for the chance to win at Indy. The drivers were truly from all over the world: 5 continents were represented.

The parade ended around 2pm, which gave me more time to explore. I then went to the Indiana War Memorial, which was right next to the parade route. The War Memorial was built to commemorate the Hoosiers who died in World War 1. The top room, called the Shrine, features a gigantic American flag suspended above the Altar of Consecration representing the sacrifice of the soldiers. Above the flag is a bright light called the Star of Destiny. The basement of the memorial houses a large museum that chronicles the history of the American military from the Revolutionary War up to the current conflict in Iraq. 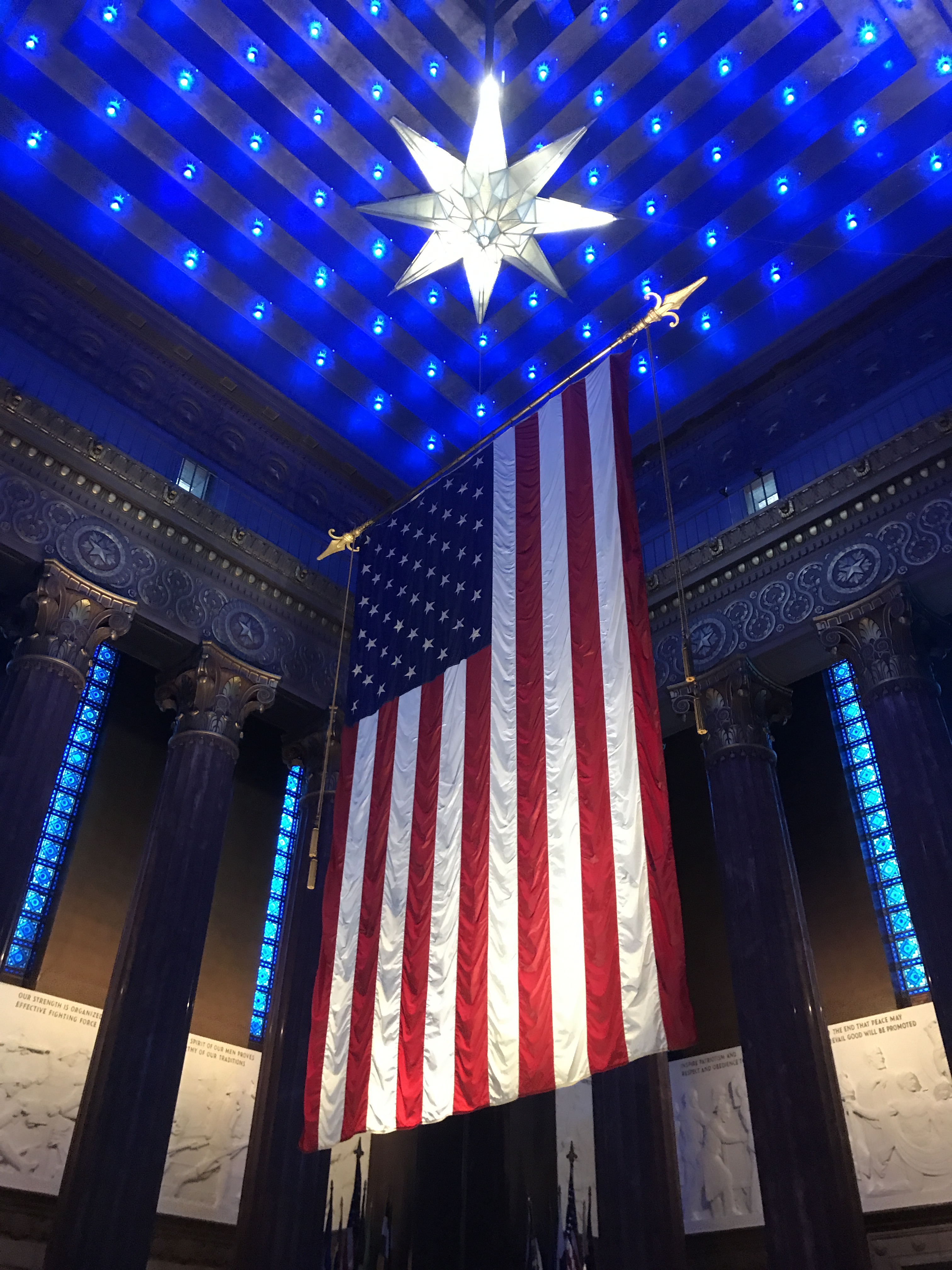 My next stop was the NCAA, the governing body of collegiate sports. Their large campus includes a museum called the Hall of Champions. There, they had small exhibits on each of the NCAA sports- there’s more than you would think. The flags of the current champions are displayed. I was very proud to see the Wash U flag flying for their D3 women’s soccer championship.

Finally, I walked over to the Indianapolis Zoo. They charged a steep $28 for admission, which apparently is the highest possible amount on their sliding scale of demand-based pricing.

Once inside, the exhibits were quite well done. They had pretty much every animal you would want to see including polar bears and an extensive African section. Just as good as the animal watching was the people watching. For some reason, the weirdest people bring their kids to the zoo. I am honestly surprised how many of these people managed to reproduce. My favorite family had the dad wearing a Mewtwo snapback hat and the mom had the kid on a leash. Another memorable moment was at the aviary. Before going in, the birdkeeper told me the rules. “Rule #1”, he said “is that the birds can touch you but you can’t touch the birds…kind of like a strip club.” I died.

The zoo also has a number of rides including a small roller coaster and a gondola, but they cost extra and didn’t seem like a good deal.

It was now nearing dinnertime. I met up with my friend Katherine and her friends. They graciously let me crash with them for the weekend as an extra guest to their sorority reunion. We decided to go out to Broad Ripple for dinner. Broad Ripple is the main area for young people to go out. There are a ton of restaurants and bars- including Kilroy’s, an outpost of the most famous bar at Indiana University.

We got dinner at a restaurant called Fyre on the Monon before heading back and going to bed early for Race Day.

A few years ago, I wrote a guide to my hometown of Los Angeles. It was time for a refresh.
Wrapped up my long weekend in Guadeloupe 🇬🇵 with a summit of the active volcano Soufriere, the highest peak in the Lesser Antillies. After braving the rain and the winds, I was greeted at the summit with a peek into the crater where hot gasses spewed from the earth! What an adventure.
Bonjour from Guadeloupe 🇬🇵 in the French Caribbean! My Airbnb host took me on a hike along the northern tip of Grande Terre and we ended up at this blowhole!!!! Allez! Allez! Allez!
Just another day in New York City 🗽
NEW BLOG POST on my day in San Pedro Sula, Honduras. It used to be the most dangerous city in the world but is now a lot safer and remains the economic engine of Honduras.
NEW BLOG POST on my trip to Copan, Honduras 🇭🇳 to see the amazing Mayan ruins. The town and surrounding countryside are absolutely magnificent.
Loading Comments...
%d bloggers like this: