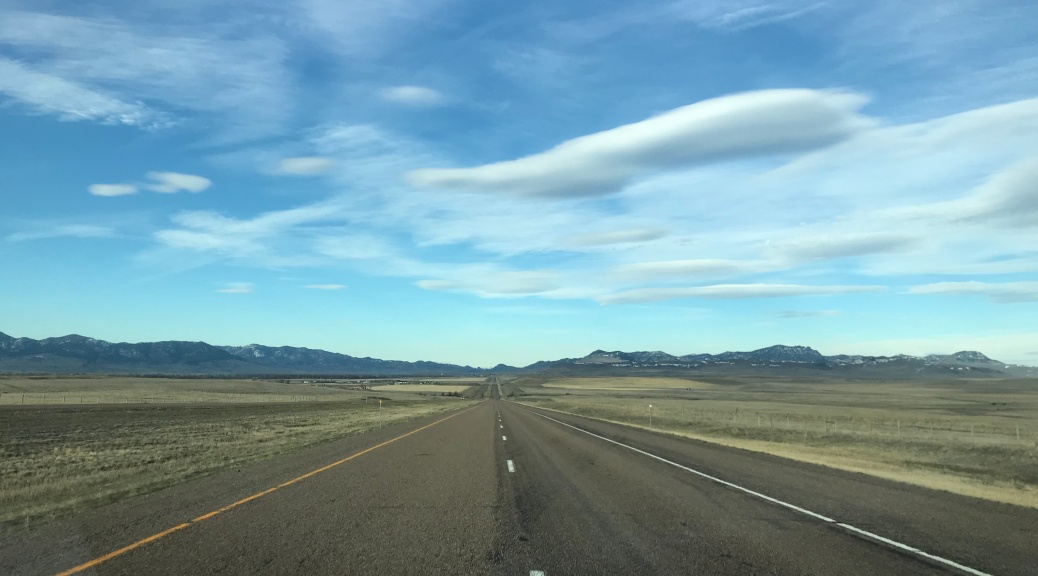 Montana flights are very expensive. From Los Angeles they usually run from $450-600 to fly to anywhere in Montana on a weekend.

By a stroke of luck, I found cheap flights to Great Falls in the month of April- my first time witnessing a weekend flight to Montana for under $300. I booked a roundtrip on Delta connecting through Salt Lake City for approximately $230. In a bizarre quirk of the airline price world, buying a roundtrip ticket for just the Salt Lake City-Great Falls leg cost $280 aka more than the trip from LA.

Late April is an unusual time to visit Montana as a tourist. The ski resorts have closed for the season, but it is still too cold and snow-covered to do summer activities such as hiking and fishing. Glacier National Park- the jewel of Montana- is still closed for the winter. The low tourism demand might be dictating the relatively cheap flights.

Because this was not the ideal time to explore Montana’s great outdoors, I decided to focus this trip on the cities of Montana. I figured that Great Falls would take about a day to explore, which left me with one free day. After ruling out Fort Benton, Havre and Lewistown: I decided to go to Helena, the capital of Montana.

My flight from Salt Lake City arrived in at 11:40. I checked my email and realized that the hotel reception closed at midnight- leaving me just 20 minutes to deplane, rent a car and drive to the hotel. Luckily, Great Falls is a tiny airport and I somehow made it to the hotel at 11:54 (this must have been some sort of record). I immediately went to bed.

The next morning, I woke up and drove straight to Helena- approximately 90 miles south along Interstate-15. The trip lasted about 75 minutes and was quite scenic. The journey began in the plains. Then, the road traced the Missouri River through the mountains and into a canyon. It then followed a tributary which opened up into wide the Helena Valley.

As I drove into town, I noticed an unbelievable number of pawn shops and casinos for such a small town.

My first stop was the beautiful Montana State Capitol. For about 10 minutes I was the only one there. Eventually, a family group showed up. The dad seemed to know a lot about the capitol so I walked over and introduced myself. The man turned out to be a former state representative showing his in-laws family from Santa Monica California around town. He had some funny stories that I feel like are common in the early history of states.

One amazing tale is about Thomas Francis Meagher, an early territorial governor whose statue is in front and center at the main entrance. Born in Ireland, he was convicted of sedition and sentenced to death. Somehow, he was able to trade the gallows for a one-way trip to Tasmania. He then escaped Tasmania and got to New York where he became a lawyer. At the start of the Civil War, he joined the Union Army and rose to the rank of brigadier general. After the Civil War, he was appointed governor of Montana Territory. Just two years later, however, he “drowned in the Missouri River” while on a party boat with all his political rivals. Nobody will know what truly happened.

Another interesting story he told is how Helena became the capital.  Helena won over the mining town of Anaconda in a vicious campaign and popular vote during the 1884. However it was discovered in the 1980’s during a renovation of the nearby Montana Club that a whole bunch of the ballots for Anaconda were taken away and stuffed into the walls of the club. Those ballots apparently would have put Anaconda on top.

The Montana legislature is different than most states with larger populations and budgets. They only meet in odd-numbered years for just 90 days. From time to time, they will get called into special sessions for emergencies. Therefore, most members of the legislature have other jobs.

The legislature is also required by their Constitution to pass a balanced budget- as in one where spending equals money raised by taxes. While the state cannot provide as many social services as other states, they are more likely to have good credit and far less likely to ever have financial woes. Also, there is a large painting in the House Chamber than makes it look like the Speaker is getting eaten by a gigantic evil wolf.

Next to the Capitol is the Montana Historical Society. They operate a museum on Montana history. The museum takes a surprisingly honest view and does not whitewash anything.

In short Montana’s human history started between 10-30,000 years ago when humans crossed over the Bering Ice Bridge. Their descendants became the Northern Plains Indians: Sioux, Blackfoot, Crow and others. They hunted the buffalo which numbered in the millions and lived sustainability off the land. It wasn’t all roses: the tribes were constantly at war (when they could find each other) and the winters were very very harsh.

While fur traders occasionally ventured through Montana, the first real white/European expedition to reach this land was the Lewis and Clark expedition in 1804-1806. Except for one incident, they were generally well-received by the tribes thanks in part to Sacajawea- a teenage Shoshone girl sold off to the Mandan of North Dakota. Her language skills helped convey the expedition’s peaceful intentions and the fact that she had just given birth to a child made her and the entire expedition far less threatening (women and babies did not engage in warfare in this time and place).

While the first expedition was indeed peaceful, the whites that followed were not. Some came to settle the land for economic opportunity. Some came to protect those who settled and extend the Manifest Destiny doctrine. And some came to convert the Natives to Christianity. The effects of this mass migration was a full-on assault of Native culture. Outgunned and eventually outpopulated, they were forced to give up their lands and their ways to the whites settlers and the American government. Many died and the rest were forced onto reservations. The buffalo were nearly driven to extinction.

At the same time, miners and the railroad found its way to Montana and there were enough people living there to make it a state in 1884. Most of Montana’s cities were founded around this time. Helena was a lively mining town and in 1900, had 50 millionaires- giving Helena the highest percentage of millionaires of any city in the country. Additionally, women were major economic players in Helena. Due to the large number of single men, the Red Light district thrived. Some prostitutes and brother owners became major real estate investors and became very wealthy.

Today, Montana relies heavily on mining and ranching. The Native culture is stronger than it was 100 years ago but will never be the same. The wealth appears to have largely disappeared.

With all this background knowledge, I then drove into downtown Helena. The drive was full of beautiful Victorian-style homes.

One of the landmarks of downtown is the St. Helena Cathedral- an incredible church far more beautiful than anything i would have expected. It is on-par with the main Catholic cathedral in cities 50 times its size.

Just above downtown is Mount Helena- a mountain in its own right, but a foothill compared to the snow-covered peaks in the distance. The hike to the top is about 3 miles roundtrip and climbs 1,100 feet (no slouch)! I took the historic 1903 trail to the top. With it being late April, there was some snow on the trail. In one shady section, I had to cross a major sheet of ice. It was slick. Luckily, the rest of the trail was conducive to hiking. At the top, I met a group of young army soldiers gossiping about their commander and his wife.

The climb down was much quicker along the steep and snow-free Powerline Trail.

After a quick and unexpectedly delicious Cajun lunch and trip to a casino, I wandered my way around Last Chance Gulch- the main street in downtown Helena ever since the town’s mining days.

While considerably less rowdy than it once was, Last Chance Gully is still an exciting place to be. The street was compact, busy with pedestrian activity, well-maintained and full of historic structures.

My highlight was the 96-year old Parrot Confectionary (a soda fountain and chocolate store). I ordered a phosphate- like soda but with powder that makes it sour.

Last Chance Gulley also had a few breweries, a beautiful library and an art museum. The art museum did not have the cliché Western art, but was almost exclusively modern/contemporary! While I absolutely love the Western landscapes, it is nice to have a multidimensional art scene.

It was now about 3pm and I was getting ready to head back to Great Falls. On the way I stopped by the ghost town/modern ski resort of Marysville.

From Marysville, I took a dirt road shortcut back to the highway and back to Great Falls.

For a small town, Helena packs more punch than most due to its history and status as the state capital. I would definitely call it off the beaten path, but so is Montana as a whole. A day is plenty here, but it’s definitely a day we’ll-spent.