The 20-seater plane landed at Georgetown Guyana’s Ogle airport at 5pm. Omar, my Kaieteur guide and I walked out of the plane, out of the airport and into a cab. I did not know where I was going to stay, but had some ideas from my Lonely Planet guide, my friend Jeffrey, and online research. I suggested Rima’s Guesthouse- the cheapest option on the list.

We got to Rima’s and I asked if there was room. They said yes, so I bid farewell to Omar. A room was $30/night, more expensive than I was hoping to spend, but still the cheapest option in Georgetown. For some reason (most likely lack of tourists), Georgetown has surprisingly expensive hotel room rates. The home-like lobby had a large shrine to Ganesh and a calendar with the Taj Mahal.

The hostess (not named Rima) led me to my room and explained that I was the only person staying here tonight and that she wouldn’t mind at all if I brought someone back.

It was now about 7pm. Before getting dinner, I walked over to the nearby Scotiabank, the only bank in the country that accepts foreign credit cards. On the way, I passed the president’s house. After returning to the hotel, I had them call a taxi to take me to the Maharajah Palace.

The cab ride took about 15 minutes and cost $500 Guyanese which is about $2.50. Then, we reached it: the 3-story Maharajah Palace. I walked into the austere door and up an exceedingly elaborate flight of stairs and through painted wooden doors into the most elaborate Indian restaurant I have ever seen.

Since Guyana’s population is 50% Indian, this place actually fit right in. While most restaurants are more Indian-fusion (roti is a good example), Maharajah Palace is a traditional Indian restaurant. Everything is imported from India. Eating there, I was indeed reminded of India. However, instead of a Kingfisher beer, I ordered some El Dorado 25-year rum to celebrate the successful trek to Kaieteur Falls. I then cabbed back to Rima’s and went to bed.

The next morning, I walked around the immediate neighborhood and wandered my way to St George’s, reportedly the largest wooden building in the world.

On the way to breakfast, I got caught in a huge rainstorm and was drenched in a matter of seconds. Breakfast was saltfish and bake.

I then meandered my way through Georgetown’s downtown. The buildings are quite spread out and are all made of wood. The wood in Guyana is unusually strong and abundant.

I quickly stopped by the National Library, which had a great exhibit on the founding on Guyana.

A block away from the Library is the National Museum. I knew I was in for a treat when the sign said “WELCOM”.

At the desk, the receptionist said I was free to explore the museum and take as many pictures as I wanted. However, every picture had to have a person in the picture- this was to prevent people from taking detailed pictures of the exhibit then creating their own museum using that information. Since I was on my own, I had to take selfies everywhere as the museum staff refused to take my picture in the museum.

It was so outlandish, that I decided to take selfies in front of everything. My favorite exhibit had an enormous replica Giant Sloth. 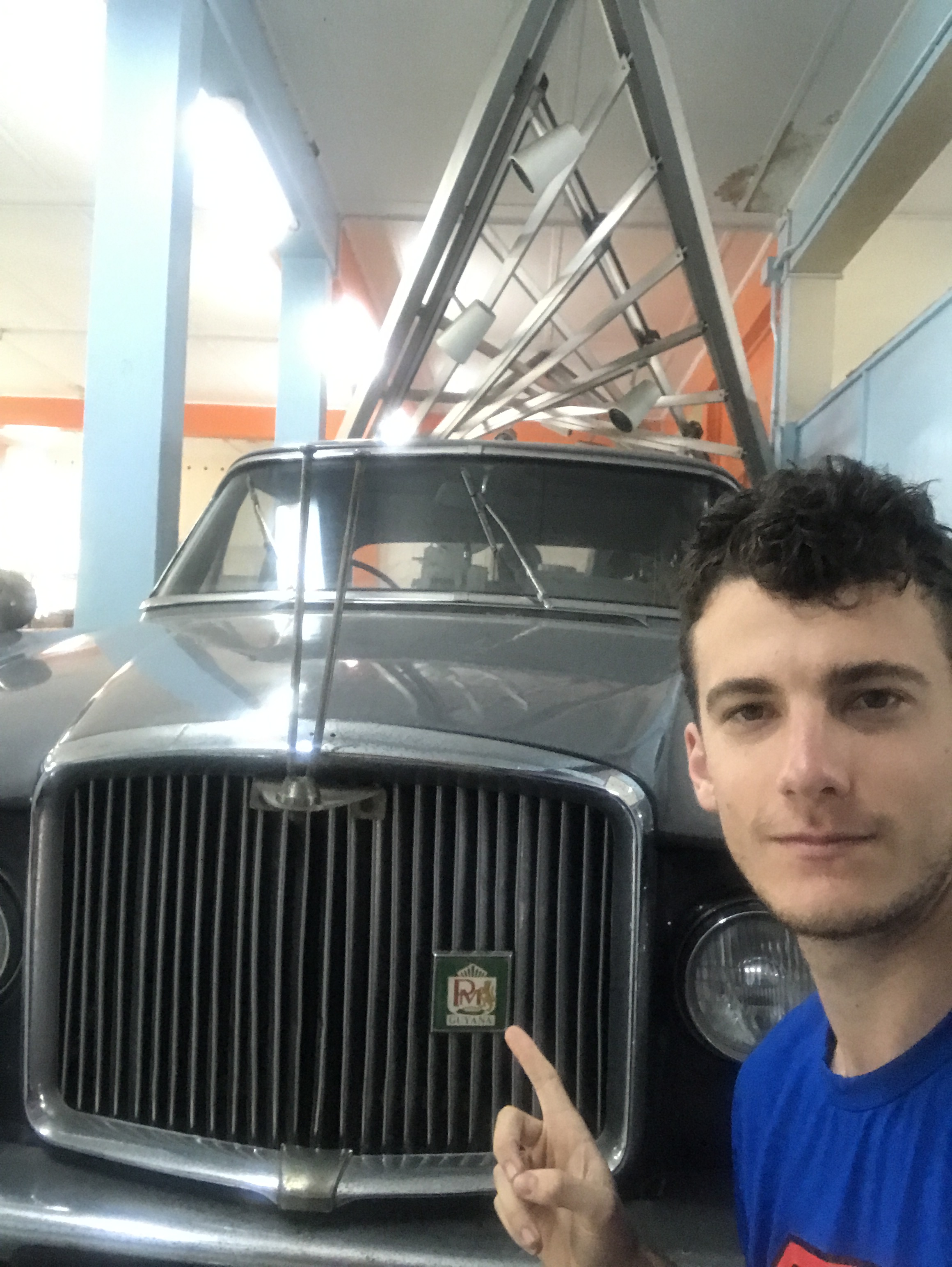 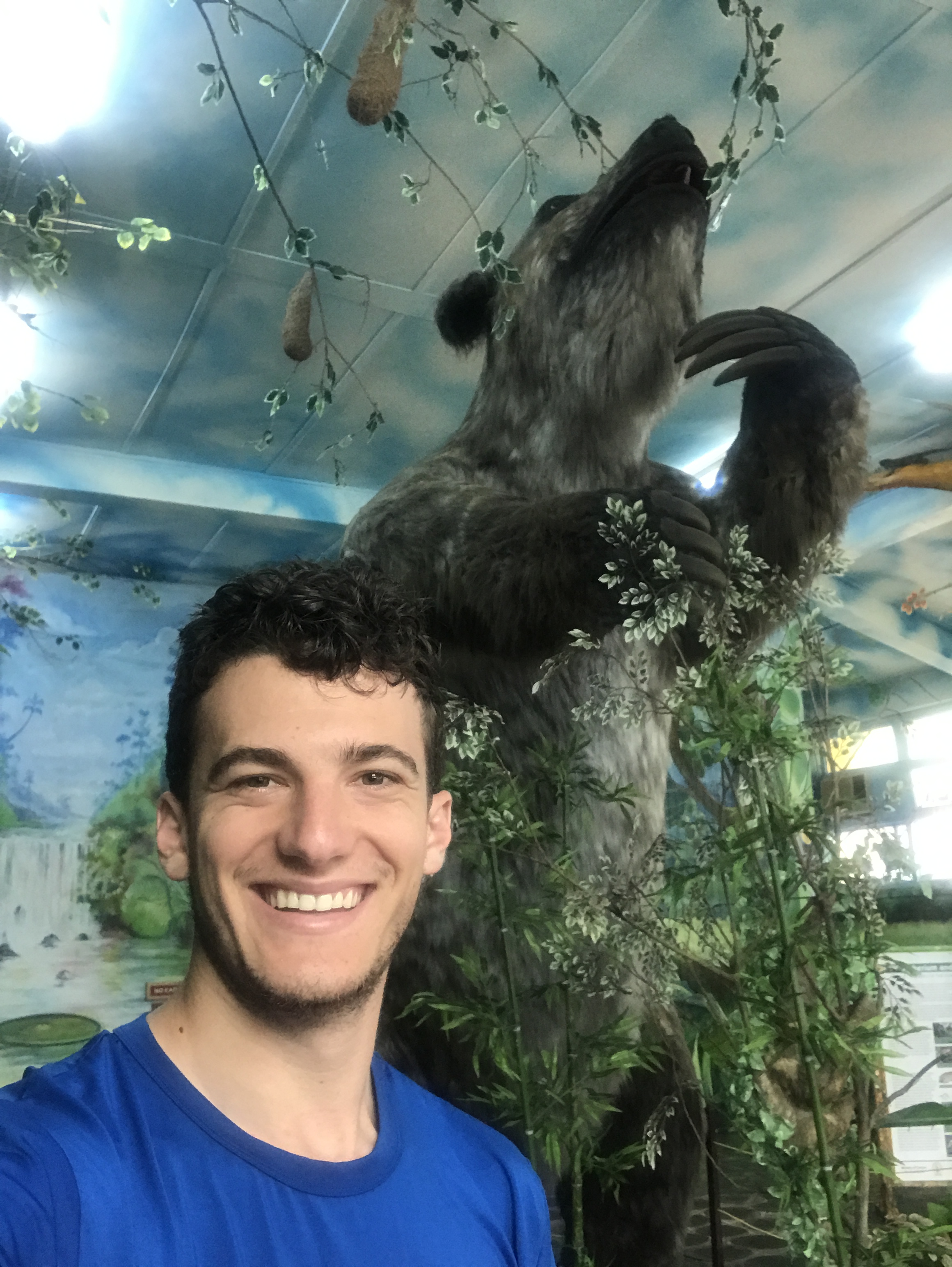 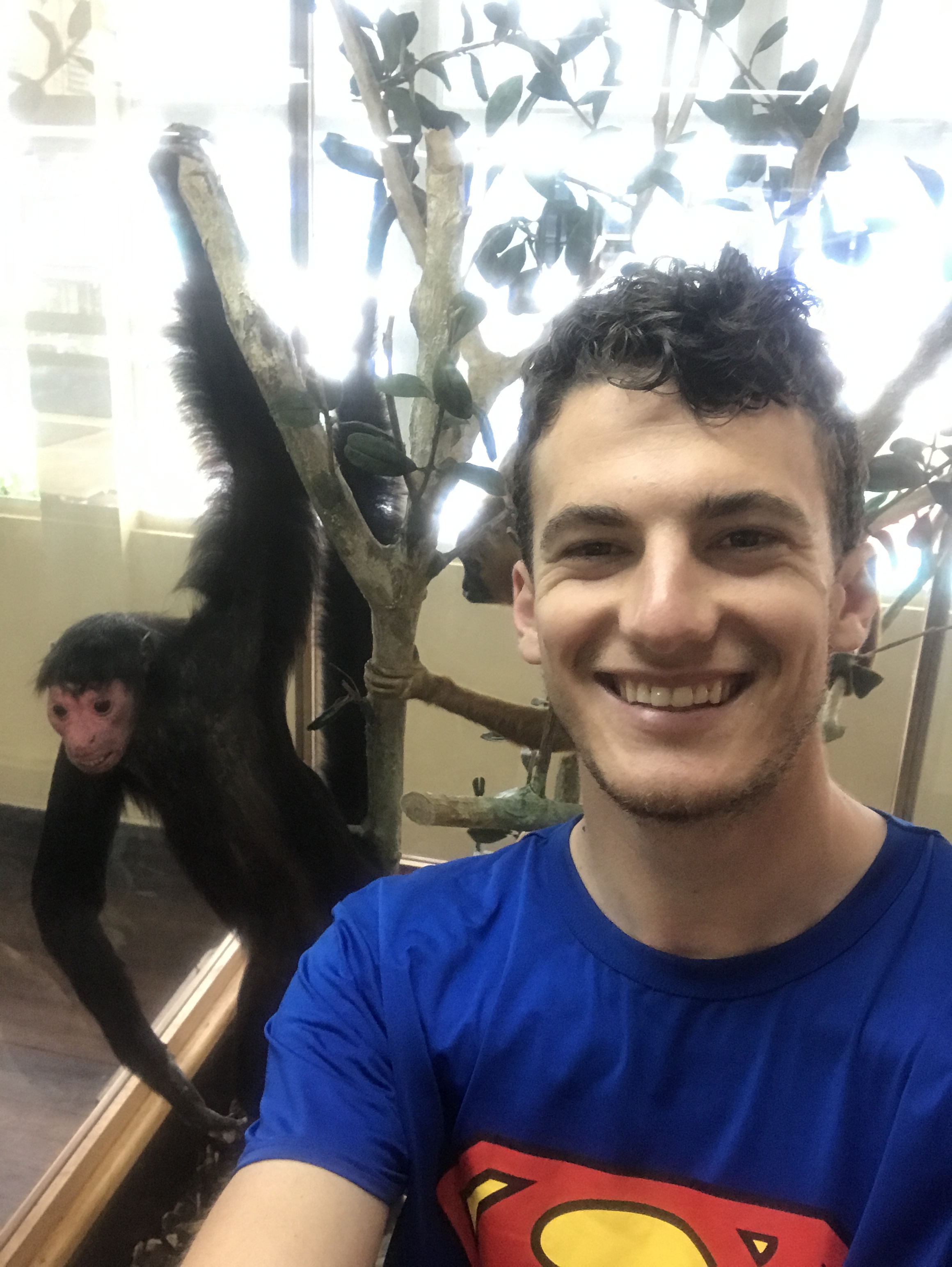 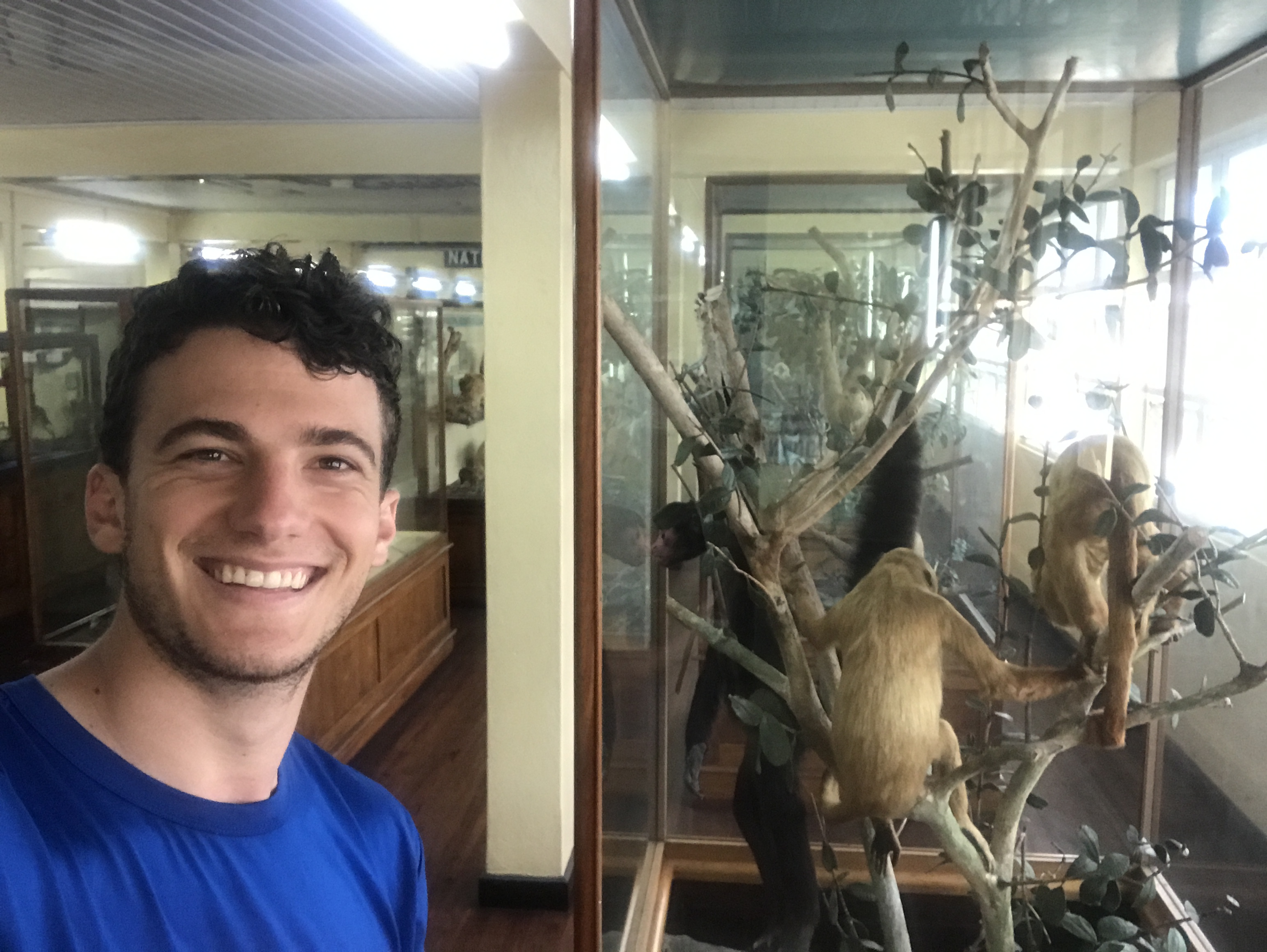 The next stop on my walking tour was the Stabroek Market, the most popular tourist attraction in Georgetown and the symbol of the city. Built by the Dutch, it has since fallen into disrepair (like the entire city) since independence. The large iconic clock is broken.

Outside of the market, hundreds of minibus drivers compete for passengers by honking their horns and hawking everyone who walks.

All the recommendations and guidebooks mention lots of crime in the market. I zipped up my pockets and stayed extra alert as I walked into the market.

The alleys were narrow and dark. It was not all that crowded inside despite the crowds outside. As long as it wasn’t crowded, I would be safe from pickpockets. I wandered my way to the back of the market which was on the water.

There, fishermen were cutting up huge fish to sell.

Around the edges of the covered market, were the fruit and vegetable sellers. Here there were crowds. Reggae music was bumping. I made sure to keep my hands near my pockets every time I passed by someone just in case, but never once did I feel threatened. Perhaps my zippered pockets were too much of deterrence.

I then walked north up Water Street through an industrial area. This was Guyana’s main port. About a mile north of the market, I reached a lighthouse. I asked if I could go up. The lighthouse keeper said to buy a ticket at the building around the corner.

The “building around the corner” turned out to be the head office of the Maritime Administration Department.

At the guardhouse, I said I wanted a ticket to the lighthouse and was granted entry to the building. I then walked into an office and once again asked to buy a ticket to the lighthouse. I was then moved to a different office, where a lady made me fill out a form. However, she could not fill out the form completely without a signature, so I then was transferred to meet with the Director General of Maritime Affairs aka the head of Guyana’s ports and rivers aka a big deal.

He quickly signed the form and I was then shuttled over to a cashier where I paid $300 Guyanese or $1.50 US. The cashier handed me the letter and told me to present it to the lighthouse keeper.

I then handed the letter to the keeper and he let me in.

The lighthouse used to be an icon of the city when it was functional. However, today it is not in use.

The walk to the top was about 200 stairs. Midway up there were defunct offices and I had to dodge poles. Eventually, I made it to the top and got a sweet view of the city.

Just 2 blocks north of the lighthouse was the beach. Unfortunately, Guyana’s beaches are nothing to write home about.

At the beach, a wild dog decided to start following me. It followed me for well over an hour as I walked down the beach, along the seawall used to keep the city above water despite being 3 feet below sea level.

In addition to the seawall, Georgetown has a large number of Dutch-built canals. However, after independence, the Guyanese government decided to pave over some of the canals to improve traffic flow. While the move did work, it created a new problem. Now, the city constantly floods with no fix. 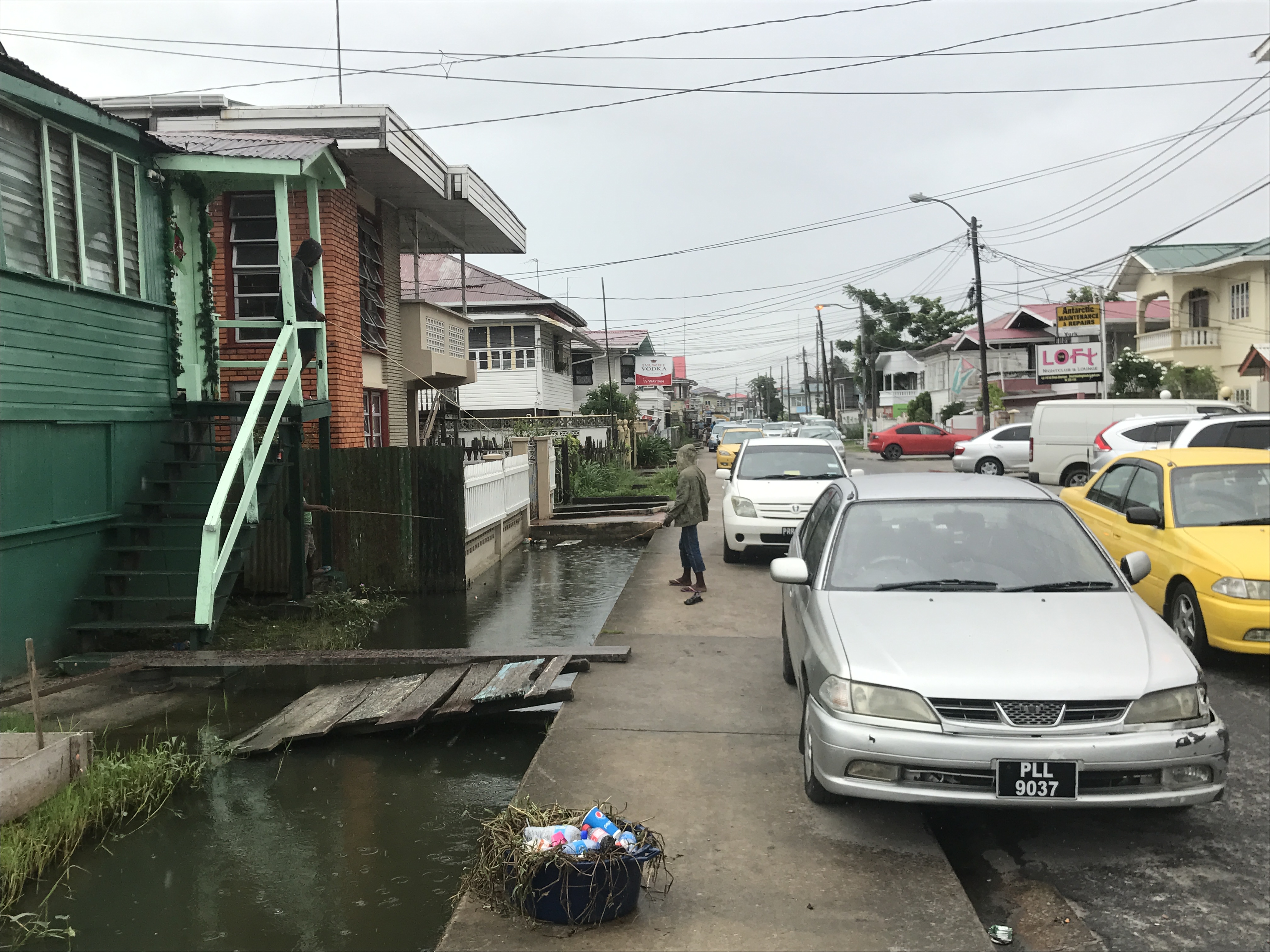 The dog followed me as I walked back through the city and crossed major streets. I felt really bad when I finally ditched it by walking into a restaurant for lunch.

My guidebook said that Shanta’s Puri Shop has the best roti in the Caribbean and after trying it, I agree.

I then walked over to a Rastafarian restaurant for a second lunch before walking 3 miles east to the Botanical Gardens and Zoo.

It started to rain, so I got shelter underneath alongside some professional photographers who were setting up for an engagement photo shoot. We passionately talked about the horrible corruption in Guyana. They asked me not to judge Guyana by its zoo.

The zoo is the saddest zoo I have ever seen. Half the cages were empty. The ones that were full had cool animals from South America. There were plenty of signs for a large renovation planned in the indefinite future. While necessary, I am not sure a zoo is the best use of funds for the Guyanese government.

I then walked the 3 miles back to Rima’s. It started to rain so I opted to get Chinese food at the New Thriving restaurant next door. Unlike the Indian food, this was mediocre at best. I went to bed early.

The next morning, I did one final lap around the city before heading off to the airport to fly to Panama.