The idea for climbing state highpoints came years ago when my friend Andrew told me that more people have summited Mount Everest than have climbed to the highest point in all 50 states. This seemed like a much more attainable goal than Everest. After doing some research, I learned that the Nevada highpoint is only 5 hours from LA.

November is a challenging month to climb tall mountains. Oftentimes snow, cold temperatures, and wind will cause peaks to become inaccessible until the springtime. Luckily, the snow had been light in the White Mountains, which lie in the rain/snow shadow of the Sierras. While the Sierras had feet of snow, the White Mountains got only 4 inches.

The most difficult part of climbing Boundary Peak is its remoteness. The peak is 50 miles from a town with more than 300 people and is most easily accessed by a 6-mile 4 wheel drive, high clearance road. Because of the danger of being in such a remote area coupled with the fact that I don’t own a car that could handle the road, I recruited friends.  Three friends decided to join: my high school friend Scott and college friends Melissa and Katrina. The two girls lived in San Francisco and had a 4 wheel drive Subaru named Toad that could handle the road. We agreed to meet up in Bishop on Saturday morning around 10:30 am.

Scott and I set out from LA on Friday evening. After an awesome Mexican meal of molcajete at Sal’s in Rosamond (the best Mexican food in the area!!), we camped in the Ricardo campground in Red Rock Canyon State Park. The next morning we drove the 2 hours into Bishop and got food for the climb.

The girls met us around 10 and after some final checks and food purchases, we set off for Nevada. Due to potential time constraints on Sunday, we took two cars. After driving 45 miles out of Bishop, we reached the Nevada state line.

We then drove 2 more miles until we reached an abandoned brothel. It was crumbling and had more shag carpet/walls than I thought existed.

Directly across the highway from the brothel was the dirt road to Boundary Peak! We drove Scott’s car up for about a mile so it was hidden from the highway. Then we all packed into the Subaru and continued up. A mile later, our path was impeded by wild horses.

We then continued up the dirt road for 4-5 miles up a canyon. The road was in much worse shape than most trail reports mentioned. I do not think we would have made it in a high clearance car without 4 wheel drive. Luckily, Melissa had experience driving on jeep trails so we handled the potholes with ease. Eventually, we made it to the abandoned Queen Mine. 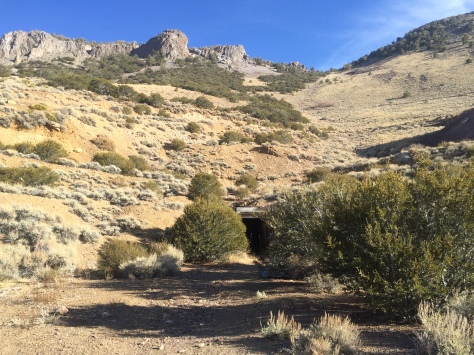 The mine is mostly caved-in, but there is room to possibly explore it. However, we opted to go for a hike to the top of a nearby mountain. By 5pm, it was dark and getting very cold.

We started a campfire and ate our dinner. The girls brought a stove and cooked chile and vegetables. I was lazy and brought beef jerky and trail mix.

For dessert we had banana boats- essentially a s’more cooked inside of a banana. It was as delicious as it sounded. We then went to bed around 9 as the supermoon rose above the mountains in the east.

Our alarm sounded at 4:45 AM. The supermoon about to set in the west. The moon set right at 5 and for a fleeting moment, thousands of stars came into view. It was cold- probably in the high 20’s. We set out from the mine at 5:20 AM.

By 5:50 AM, we had reached a saddle where we could see the sky lightening in the east. The official trail ledger is located just above this saddle. It was empty- perhaps the Forest Service assumed that nobody would climb here in November.

The trail worked its way up a the high desert hill for about 1,000 vertical feet before leveling off on a ridge. We followed the ridge for about a mile before reaching another saddle. It was now 7:30 and we were below a huge rock mountain that appeared to be Boundary Peak. We took a break at a conveniently placed rock shelter. About 100 yards away, there was a grove of bristlecone pines- the oldest trees in the world. The oldest confirmed tree in the world- about 5,000 years old- is in a different part of the White Mountains 20 miles south.

After an extended break, we started up the steep rocky slope. The trail was surprisingly clear given the difficult terrain. This part of the trail was in the shade and the wind was moderate. I was very cold despite wearing 3 layers. About 30 minutes and 700ish vertical feet up the slope, we saw our first snow patch on the trail.

The snow patches turned into a snowy trail completely filling in the obvious path up the scree slope. It became clear that snow climbing skills would be required. We kicked steps into the snow to create a staircase up the mountain. 30 minutes of effort led us to a small saddle free of snow.

At the saddle, two peaks were revealed: a smaller scree/rock pile to the left and a much larger mountain straight ahead, covered in snow. We optimistically hoped that the smaller peak was Boundary and the larger Montgomery, but after consulting the trail guide, we realized that we had a long way to go.

The trail quickly disappeared beneath the snow and we were left to follow the obscure snowy footprints of a past climber-presumably the last person on the mountain. The footprints often disappeared and we were left to routefind our way up the steep scree/snow towards the obvious summit. Eventually, we would find then lose the footprints again. This process continued on for well over an hour until we reached a final saddle just underneath the final summit hill.

Now back in the sun just 400 feet below the summit, we paused for a final break. Scott revealed he had altitude sickness and proceed to throw up. After being questioned and taking a Diamox pill, Scott appeared to be good enough to climb the final 400 feet, so we pressed on.  Just 3 minutes later, we were at the summit.

The view was incredible. To the north we could see all the way down into the valley with the abandoned brothel. To the east were the desolate basin and ranges of Nevada. There were no people in sight and no more than 1000 in a 20 mile radius. The taller Montgomery Peak-in California- lay to the west. While it certainly looked and was taller, it wasn’t enough to make me feel bad about just climbing Boundary Peak. Boundary felt like its own peak and I was very proud to have made it.

We took a few pictures and signed the summit log. It was now 11 am. We had hiked for almost 5 hours. In 6 hours, it will be dark. So we knew we had to hurry down. Luckily, everyone got a second wind and we made it down to the car in just 3 hours- its much easier going down snow than up snow. For the final mile, we ran down the hill following Katrina’s lead.

At camp, we quickly packed up the tents and loaded the Subaru. In just 20 minutes, we were on the road!

Very quickly, our joy turned to fear. We drove quickly through a huge rut. The flat tire light came on. We drove a few more minutes past the worst of the potholes then checked the tire. It had a pistachio-sized hole in it and was definitely not repairable.

Scott and I changed the tire.

The Subaru only had a donut tire for a spare, which was odd for an off-road car. The donut tire caused two major problems going forward. First, we did not trust it on the jeep trail, so we went extra slow-like walking speed. Getting another flat on this trail would be extremely dangerous and costly. Scott and I moved precarious rocks out of the way.

Second, the donut tire did not have enough lifespan to get back to San Francisco. As soon as I got cell coverage, I searched for tire shops in Bishop. It appeared that only 1 shop was open on Sunday. I called them and they said that they closed at 4. I told them I would get there at 4:15 and only needed to buy the tire- we would put it on instead. They said they would stay open for us until 4:15. That meant that Scott and I had to get to our car, which was conveniently parked on the dirt road, take the tire, and drive the 50 miles back to Bishop in 35 minutes.

Scott high-tailed it and we probably averaged 90 mph to make it to the shop at 4:20. They were very cool and quickly gave us the new tire affixed to the wheel.

30 minutes later, the girls showed up in the Subaru. We changed their tire, they headed out and Scott and I celebrated with some beers before heading back to LA ourselves.