I crossed into the Green Mountain State on Interstate 89 at White River Junction. Immediately I knew that this state was different. Despite being in the middle of one of the state’s largest population centers, it felt like I was in the middle of the wilderness.

I continued north for approximately an hour. The interstate wound through rolling hills that Northeasterners call mountains. The leaves were changing from green to a majestic gold.

Soon enough I reached Waterbury on the legendary Route 100. Due to the Columbus Day long weekend (which corresponds with Canadian Thanksgiving), there were loads of tourists here.

Heading north on Vermont 100, my first stop was the Ben & Jerry’s factory in Waterbury. This place was swamped. It was so crowded that I had to wait 30 minutes in line just to purchase a tour ticket for later in the day. The first available tour was in 2 hours. Not wanting to spend that much time hanging around, I booked a tour for 6pm, the last possible slot. That would give me plenty of daylight to do other things.

Even though the roads were horribly congested, there were no stoplights/signs on the Vermont 100 – even in front of the Ben & Jerry’s factory. A useless state trooper was hanging out in his car. It took me nearly 10 minutes to make a left turn out of the factory. It would have been longer, but a nice driver pitied me.

Figuring that every restaurant in the nearby town of Stowe would be overrun by tourists, I stayed out of town and headed to the Von Trapp Brewery for lunch. The Von Trapp Brewery and nearby Lodge are owned and operated by THAT Von Trapp family from The Sound of Music. The family settled in Vermont after the War because it reminded them of Austria. Maria’s youngest son Johannes runs the show. He happened to be next to me at the bar when I sat down. We exchanged a few brief words before he left although I was unaware of his identity at the time. The beer and sausage plate were good, but I definitely paid extra for the Von Trapp name.

I continued north to the Stowe Mountain Resort, one of the most popular ski mountains in the Northeast. I then paid a steep $26 to drive up the famed Mount Mansfield Toll Road. This steep but maintained dirt road leads to the ridgeline of Vermont’s highest peak. The drive took about 20 minutes and went through some beautiful peak fall foliage.

From the top of the road, an easy 1.6 mile walk leads to the summit – The Chin (4,393 feet). The hike was much easier than the Monadnock hike in New Hampshire and traversed through an arctic tundra environment. Dwarf pine trees and lichen covered the trail.

After about an hour of hiking, I finally reached The Chin, which was covered in clouds. While the view wasn’t obscured, I had a nice chat with a member of the Green Mountain Club, a private nonprofit which maintains a major long-distance trail called the Long Trail.

After returning to the car, I stopped briefly at a cider mill. In addition to apple cider, they had apple cider donuts which I would highly recommend.

Then I returned to the Ben & Jerry’s factory for my long-awaited tour. The tour lasted 30 minutes and consisted of three parts. The first part of the tour was a short video about the history of Ben & Jerry’s. While fun and full of jokes, it didn’t really explain as much as I would have liked. At the end of the video, Ben & Jerry (who no longer are involved in day to day operations of the company after selling out to Unilever) talked about how social issues and human rights are much more important than ice cream.

The next tour stop was the factory floor viewing area. From here we could see the surprisingly small factory. There, another video explained the ice cream-making process. The Waterbury factory only produces 17% of the worldwide production of Ben & Jerry’s and only produces the 12 or so most popular flavors. The rest of the flavors are actually made in other factories: both in Vermont and overseas at Unilever facilities. This made the Ben & Jerry’s ice cream store- that sells theoretically every flavor- way less special because at least 80% of the flavors were made in other factories.

The final part of the tour was the taste testing. They gave us Phish Food, which is a chocolate/marshmallow ice cream with fudge fish. While interesting to see, there are better uses of your time than the mediocre Ben & Jerry’s factory tour. 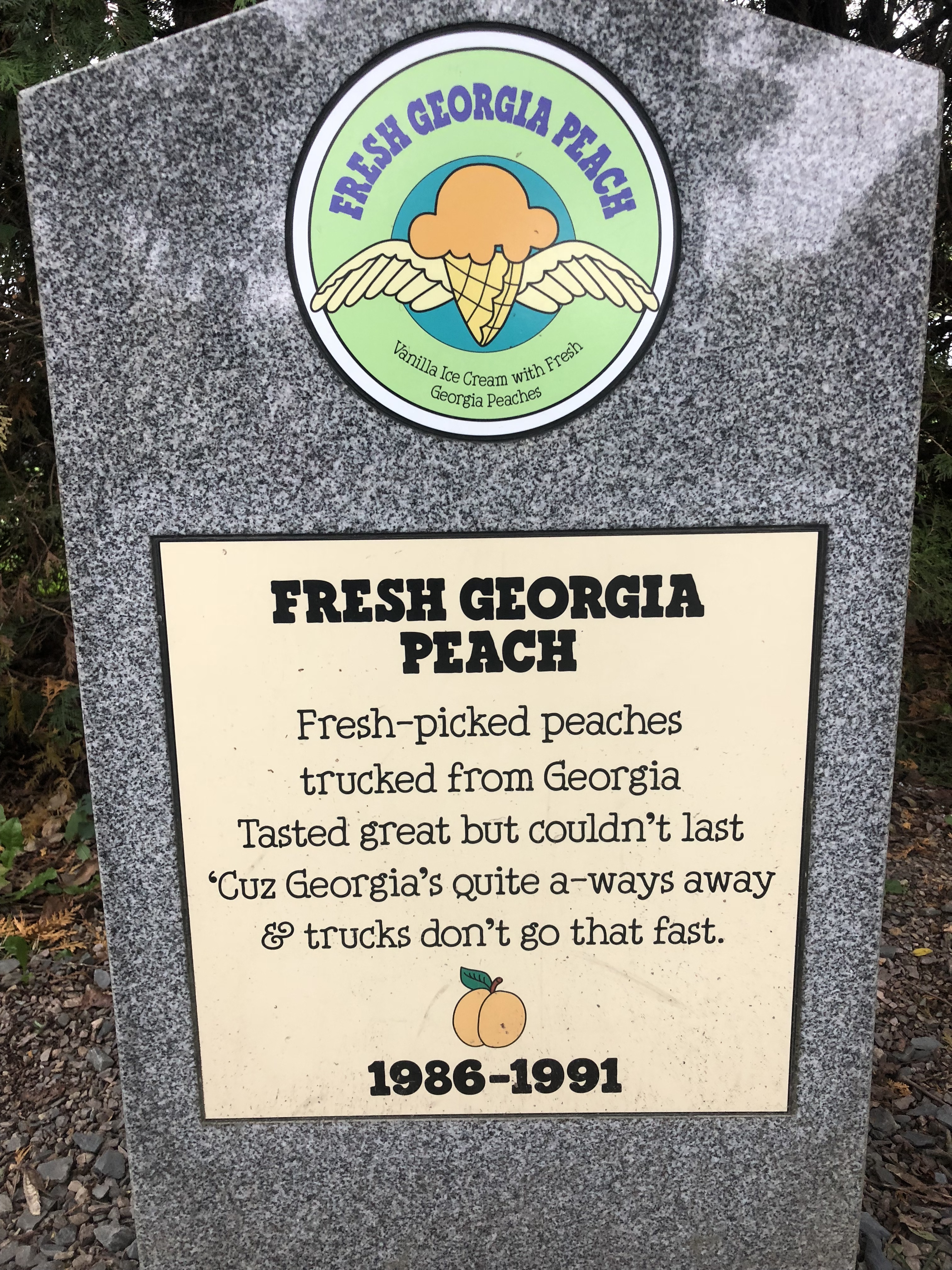 The next morning, I headed over to the town of Woodstock (not the home of the music festival). The town was another picture-perfect classic New England town. Just outside of town is a stunning covered bridge.

On the northern outskirts of town is the Marsh-Billings-Rockefeller National Historic Site. This long-named place is an old farmstead that has three very famous owners who have all been at the forefront of conservation.

The farmstead’s first famous occupant was George Perkins Marsh who grew up here. He was considered America’s first environmentalist and realized that humans could have a negative irreversible impact on nature. His book Man & Nature was one of the bestselling books of its day.

The farmstead’s second famous occupant was railroad executive Frederick Billings, namesake of Billings, Montana. After reading Marsh’s work, Billings decided to return to his native Vermont and purchased the boyhood home of his idol. Billings decided to implement some of Marsh’s ideas by planting specific pine trees in the nearby hillsides.

Finally, the site was acquired by Billings’ granddaughter Mary French and her husband Lawrence Rockefeller. The two were influential in the creation of new public lands. In 1992, they donated the land to the National Park Service to create Vermont’s first and only National Park Service Unit.

The house is available for tours, but the next available one wasn’t for a few hours so instead I took a long 4-mile stroll through the woods. It was so beautiful.

The adjacent Billings Farm is a working farm run by the National Park Service.

Just east of Woodstock is the beautiful Quechee Gorge, a 165 ft deep canyon traversed by a bridge.

The afternoon, I headed to Royalton, Vermont about 20 miles north of Woodstock. The main attraction here is the Joseph Smith Birthplace Memorial. Joseph Smith founded the Church of Jesus Christ of Ladder Day Saints (aka the Mormon Church aka LDS). This monument and museum is essentially the Mormon Bethlehem. The difference is that Ladder Day Saints view it as a historic site, not a holy site. To them, it is simply the former home site of a very important person.

When I showed up, a Church Elder was leading a guided tour to a large family from Utah. They let me tag along. Our guide told us the history of the site.

Joseph Smith Jr. was born in a cabin on his father’s farm in Vermont on December 23, 1805. While living in Vermont, he developed a terrible bone disease, but luckily received some experimental medical treatment at nearby Dartmouth College which saved his life. After he healed and after three years of crop failures, the family moved to western New York when Joseph was 12. A year later, he apparently had the fateful vision in the woods which ultimately led to the start of the Church.

Interestingly, this farmstead was  then completely forgotten until 1904. The Mormon Church wanted to do something special to commemorate the 100th anniversary of Joseph Smith’s birth. In just one year, a Church scout/project manager was able to not only find and confirm the site it using local records, but he also constructed a 50 ft stone obelisk just days before the birthday celebration. My guide proudly claimed the monument’s construction story as both an engineering marvel and a sign from God that he wanted the birthday celebration to happen as planned. In the site excavations, workers were able to recover the original hearthstone from the cabin. It remains in its original location.

The tour was informative and everyone was so nice. However, my favorite part of the site was the inspiring music pumped into the nearby woods. Paired with the falling autumn leaves, it created a surreal environment.

For my final stop in Vermont, I had a blowout dinner at The Worthy Burger. This spot was way cooler than I was expecting for such a tiny town: locally-sourced ingredients, reggae music, tons of craft beer, and tons of hipsters. The blue cheese apple aioli burger was fantastic too!

From there, I headed back to New Hampshire and eventually home in California.

Vermont surprised me for the better. Even though everyone told me how pretty it was, I was expecting to be underwhelmed because I live near bigger mountains. But the mountains here have a different type of charm that really struck me. I also really liked how the state decided to build their roads. The highways had very few exits. Those exits were built away from the towns in order to keep both the towns and the views from the highway pristine. There was no ugly sprawl near the highways.

Vermont also bucks a national trend where urban areas are liberal and rural areas are conservative.  It is perhaps the only unabashedly liberal rural area that I know of in the entire country. The strong social values of Vermont played their way into many of the businesses and contributed strongly to both the culture and the development.

In short, I really enjoyed my time in the Green Mountain State and would highly recommend it as a place to visit.

Perfect autumn day exploring the Storm King Art Center!
One week down as a “business professional” in New York.
My first (of many) Central Park runs. So amazing to live near this gem!
My parents got a new puppy today. Welcome Ringo Caster!!! #schnauzer
Gainfully employed. Day 1 ✅
Incredibly special to watch my best friend from college walk down the aisle. Congratulations @andhess and @shelbylindblad
Loading Comments...
%d bloggers like this: