Why The Gambia / Logistics

I had a long weekend from business school and was toying with the idea of going to West Africa. A Kayak search from Barcelona to “West Africa” showed that flights to Banjul, The Gambia were half the price of any other destination except for Morocco.

The Gambia is an ever-so-narrow country in West Africa surrounded by Senegal. The country straddles both banks of the Gambia River and speaks English. It is the smallest non-island country in Africa.

Until recently, The Gambia was a beguiling destination: most visitors came from the UK and Scandinavia on package tours that included a charter flight (on Thomas Cook or The Gambia Experience) and a hotel. Both companies used private planes. If you didn’t want to take a package tour, Banjul had just two regular air routes to Europe (Brussels Airlines and a weekly Vueling flight to Barcelona).

During the past year, Thomas Cook (which carried 40% of the country’s visitors started experiencing financial difficulties. As a result, a number of new airlines have launched Gambia operations including Turkish Airlines and TAP Portugal, driving down the price.

After realizing that the country is safe (rated as safer than Spain according to the US State Dept), the visa can be obtained on arrival and that visitors do not need a yellow fever card (which I left in LA), I booked the flight.

A few days later, on September 24, 2019 Thomas Cook filed for bankruptcy which caused The Gambia flight prices to skyrocket as holidaymakers scrambled. Luckily I was good to go!

In Africa, I generally prefer to have a tour guide for a number of reasons. Luckily, The Gambia has a developed tourist infrastructure, so I had a good selection of operators to choose from (unlike Congo-Brazzaville). I settled on Lam’s Tours and booked everything via email.

My flight from Lisbon to Banjul took 4 hours and departed at 10pm. Usually on a flight leaving then, everyone tries to get some sleep. Unfortunately, across the aisle from me were two men from Pakistan who were blasting music on their phones and chatting very loudly. Other passengers complained and got very upset. “A plane is not for sleeping” they declared to everyone. A fight almost broke out. Eventually the conversation quieted down and the Pakistanis fell asleep.

At 2am we landed at the very rough Banjul International Airport. The immigration process went very smoothly. My $60 visa-on-arrival fee got waived because I was on a “tourist flight” aka from Europe.

I had a fun time exchanging currency. The largest regularly-circulated bill in The Gambia (100 dalasi) is worth less than $2 USD. My 300 Euros got me a literal brick of cash! It is both fun and a bit nerve-wracking carrying that much cash around.

A hotel shuttle picked me up and one other passenger: a British man who has been to 152 countries. At that moment I knew I picked the right country.

The hotel was fine.

At 9am, I was picked up by my guide from Lam’s Tours. My guide’s name was Solo and my driver’s Smiley (probably short for Ishmael).

Today’s tour would visit a number of popular attractions near the Atlantic coastline and in the country’s largest city: Serrekunda.

Our first stop was the monkey forest, the tourist name for Bijili National Park. After a short hike through the forest, we encountered a group of four red colobus monkeys. Using peanuts, we fed the monkeys. They gently took the peanuts right from my hand!!! It was incredible. They are soooo cute.

On the way out we also fed goats with the remaining peanuts.

Then we headed to Bakau, home of the famous crocodile pond. Outside the pond, i encountered some children. A man was trying to sell me candy to give to the children. He said it would really make their day to give them candy (Africans are the world’s best salespeople).

Had I not done my research, I probably would have followed the lead of a group of Danish tourists. Immediately after they bought the candy, a group of 10-15 young children swarmed around them chanting “minty sweeties!” The kids had the biggest smiles on their faces.

Giving these children candy is wrong for a number of reasons: 1. The candy is terrible for the kids’ teeth since toothpaste is not readily around. 2. Eating huge amounts of sugar every day is not healthy for a child. 3. By giving the kids candy, the kids associate tourists and white people as a source of things. This sets a very bad precedent and encourages them to beg instead of going to school. 4. The children become a tourist attraction/photo op which they shouldn’t be.

Ever since that moment, I took notice to the Gambian children. Every time I would pass children, they would jump up and down and smile big. I will never know if they were genuinely friendly or if they had been trained to act friendly for candy. Hopefully the former, but it is very sad that this comes up in my mind.

Before visiting the pool itself, we stopped at a local history museum. They had displays of jujus (charms) and tribal masks. There was also an exhibit on the history of The Gambia and the forgotten achievements of Gambians in the World Wars.

Finally we headed to the crocs. A sign said “do not touch the crocodiles without advise of the pool guide.

We turned a corner and bam there were 15 crocodiles hanging out just feet from me, a few other tourists and the their guides. 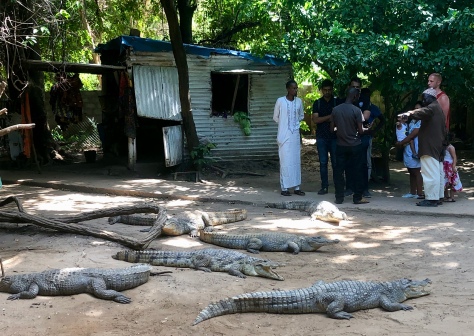 The pool guide invited me to touch one of the live crocodiles. I first waited for another tourist to touch a crocodile before going for it. This was without a doubt one of the scariest things I have ever done. The croc was scaly and smooth. After 10 seconds I had had enough and slowly walked away. I had lived to see another day.

The pool guide said that these crocodiles are sacred and have been revered by Gambians since the 1600’s. There are about 150 crocodiles in the pool. They do not attack humans because they have been accustomed to humans their entire lives. Each morning the pool guides feed the crocodiles fish. A lot of fish. After the feeding, the crocodiles become very sleepy which is conveniently when I arrived. Because the crocodiles were full and sleepy they were unbothered by the humans. The crocodile population is managed by controlling the number of eggs.

On the way to our next stop, we gave back to the community in what i believe is the right way. I purchased 50 kilograms of rice in a local market for about $25 USD. Then my guide found a home where the family looked in need. We asked if they wanted the rice as a donation. After the family said yes, I was welcomed in to visit their home where 9 people slept on 3 very old mattresses. The father told me that the rice would feed his family for about 2 weeks and that I was welcome to come back to visit my new Gambian family anytime. I believe this was the right way to give back because it addresses an immediate need of the community and 100% of the donation goes to the right people.

We continued driving on a dirt road for 30 more minutes.

Then we reached Rainbow Beach. This beach resort was idyllic with a bar in the sand. An old Ricky Martin song was playing and tourists from both Europe and Africa lounging and drinking Gambia’s Africa-famous JulBrew beers. This place had serious Spring Break vibes. I ate a Gambian lunch of chicken yassa and fried ladyfish with hot sauce. I then took a walk down to the water and dipped my feet in. Bathtub temperature- it must be 90 degrees! I’ve never felt ocean water quite like this.

Strolling down the beach, I was approached by a “bumster”, a local man who wants to sweet talk you into giving them money. It’s absolutely impossible to ignore them. Bumsters start by trying to befriend you. This guy assumed I was from Germany and told me how Germans are the best. When I said I was American and he said that Americans were actually better than Germans because we speak English just like The Gambia. After 3 minutes of trying to ignore him, he finally gave his sales proposition: a spot on a fishing trip. I politely declined 10 times before walking away. I genuinely feel for these people and respect their drive, but at the same time it is extremely annoying to be pestered every time you step onto public land on the beach.

After a couple lazy hours we got back into the Jeep and headed north towards my hotel. On the way back, we stopped at a large fish market on the beach- reportedly the country’s largest. There, I saw hundreds of women sorting fish and then smoking them on stone grills. Due to Gambia’s advantageous location at the mouth of a huge river, much of the fish is exported inland to Senegal, Guinea and even all the way to Mali.

On the beach, I saw hundreds of colorful wooden boats and tons of people walking around. I was advised by my guide to not take pictures of the people.

Finally we ended at my hotel, the Leybato Beach Resort, where you can stay on the beach for just $30. My circular room was not air conditioned by was comfortable and just 20 steps from the beach. The hotel was proudly Gambian owned.

I took another dip in the ocean. This time, I didn’t get harassed by the bumsters because they saw I was swimming. One guy yelled for me to avoid the rocks.

Later on I went for a run on the beach. The guy who told me to avoid the rocks walked over to me and said “do you remember me?” This was his angle to start the bumster sales pitch. I simply thanked him and started jogging south along the beach.

10 minutes away, I reached a sort of town with beach bars and hotels. Noticed a lot of European tourists lying on lounge chairs. Of note we’re the large number of older European women with younger very fit (think six packs) Gambian men (presumably bumsters). This was sex tourism- not so much in the predatory way you hear about it in Thailand- but sex tourism nonetheless. The Gambia is known as a hotspot for sex tourism for women. It probably wasn’t the right reaction but I could only help but laugh to myself.

I watched the sun set from a beachside hammock. I got dinner nearby before calling it an early night to catch up on sleep before the big day tomorrow.

I have a new blog post on my weekend in Newport, Rhode Island. While best known for its Gilded Age mansions, the town is actually a well-rounded destination with colonial-era history, beautiful scenery, food and a lively downtown.
Happy longest day of the year ☀️ from New York City
Love that the Empire State Building is peeking under the bridge
🫧 🫧 🫧
NEW BLOG POST on my trip to New Bedford, Massachusetts. This former whaling capital of the world has one of the most interesting histories of anywhere in the US.
The beautiful backwaters of Kerala
Loading Comments...
%d bloggers like this: