Back in early 2017, I churned a credit card bonus for the Chase Sapphire Reserve that awarded me with 100,000 Chase points (the bonus is currently only 50,000 points). Because the points transferred best to United, I decided to spend the points on a unique United route: the Island Hopper. On that route, I went to the Marshall Islands, Micronesia and Guam. In order to get back from Guam to my job in Los Angeles by January 2nd, I discovered that the cheapest flight involved taking a 7:30 am flight on New Year’s Day from Guam to Honolulu. The flight would cross the International Date Line, landing in Honolulu at 6:30pm on New Year’s Eve. I would then take a red eye from Honolulu to Los Angeles leaving right at midnight on the second New Year’s Eve.

There are other ways to celebrate two New Years. One option is to fly from New Zealand to Honolulu. However, the best option is to fly between Apia, Samoa to Pago-Pago, American Samoa. Those destinations are only a 30-minute flight from each other but are on opposite sides of the date line. Maybe next time!

After spending a full day exploring Guam, it was about 9pm and time to head out to celebrate the first New Year’s Eve!

I decided to head out to the most happening place in all of Guam… the K Mart.

For some reason, K Mart built a gigantic location in Guam- rumor is that this is the world’s largest. It is so large and popular that Walmart hasn’t even tried opening up a store here. The parking lot was jam packed- like it apparently is every night. Inside it looked just like any other K Mart.

From K Mart, I headed down to Tumon, the main tourist center of Guam. Here, large hotels that cater to primarily Japanese tourists line the beach. Tumon has one quarter-mile stretch that feels like Waikiki with nice hotels and fancy shops like Gucci, but most of the area in uninteresting sprawl. Based on a recommendation, I stopped at the Dusit Thani hotel to see what was happening. The lobby and surrounding areas were busy with nicely dressed Japanese tourists, but nothing was really going on. I asked the hotel receptionist and she the best party was happening a mile north at Gun Beach.

Around 10pm, I got back in my car and drove to a packed parking lot at Gun Beach. There, I noticed two events going on: a beach bar inhabited by US military and a Japanese dinner theater. The beach bar was playing crowd pleasers like Yeah and the Wobble. Unfortunately the dance floor was right next to the too-loud speakers.

200 feet away, the dinner theater got started. A couple hundred Japanese tourists sat down to an impressive Polynesian dance show. Lots of people at the beach bar wandered over to get a free unobstructed view of the show.

At around 11 pm, I was getting bored and decided to wander down the beach. Just past the dinner theater was a huge hotel. A security guard said they were having their own New Year’s Eve show for guests that included a firework show and champagne toast starting at 11:30. I went up to the lobby and hung around. Eventually 200–300 Japanese tourists in funny paper hats started to pour into the lobby. Even though I was the only white person here, nobody questioned me or doubted that I was a guest at the hotel. 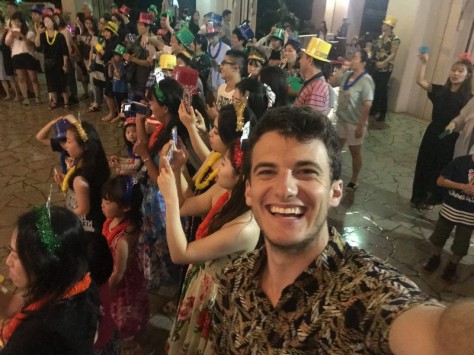 At 11:30 pm, we were treated to a Polynesian dance show. It wasn’t as good as the dinner theater’s show nearby, but it was good enough for a free hotel lobby event. 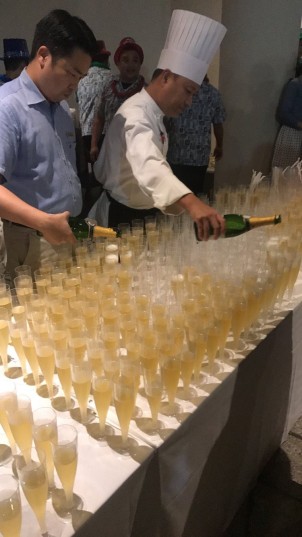 At 11:50 pm, the hotel staff started handing out champagne glasses to everyone. I then all headed to the balcony and took selfies with the other guests.

Then it was midnight! A firework shot into the air and everybody cheered! Akemashite omedetou!

We drank the champagne and waited for the firework show to continue, but they unfortunately had technical difficulties. Ten minutes later, I headed back past the beach bar and empty dinner theater to my rental car. Then I drove back to the AirBNB and crashed.

The airport was surprisingly busy at this time with many flights going to Japan and Manila. One flight stood out among the rest: United Flight 200 headed for Honolulu.

To kill the time, I sat in the VIP lounge (which I got access through my Chase Sapphire Reserve’s PriorityPass perk). I got a free breakfast and tried in vain to access their horrible WiFi connection. At least the seats were comfortable.

An hour before the flight was scheduled to depart, a voice boomed over the loudspeaker paging all customers to the gate to clear…US Immigration. This surprised me because the flight was between a US territory and a US state and I had already cleared US immigration in Guam. I later learned that the reason for this is the unique visa policies of Guam- many Asian citizens can go to Guam visa free but not the rest of the US.

After waiting in the line (no Global Entry here), I presented my passport to the immigration official who briefly questioned me before stamping my airplane ticket. While a US passport technically isn’t required to enter/leave Guam, it is by far the easiest way to establish citizenship to pass through this immigration checkpoint.

I then boarded the completely full flight on the twin-aisle jet. Nobody except me seemed excited to time travel back to 2017- maybe because it involved a 6.5 hour flight on United Airlines. The guy next to me on the plane shrugged. The flight attendants said nothing about it.

United’s new planes have a BYO entertainment policy. As long as you have downloaded the United App, you can stream movies on your device. Unfortunately, US cell coverage didn’t work in Guam and the airport doesn’t have functioning WiFi, so I suffered for 6.5 hours horribly tired.

While the flight was miserable, the good part is that it did indeed land in Hawaii on time. Not the most pleasant start to 2018.

I walked over to Advantage to pickup my car rental, but they said they were out of cars and that I had to wait an unknown amount of time for other customers to return their cars. Not having any of it, I called up their corporate number, cancelled my reservation and called an Uber.

I told the driver to take me to Downtown Honolulu, although I had no clue exactly where I wanted to go. During the ride, she suggested I go to the Aloha Tower because there was a huge party going on. She dropped me off and indeed there was a huge party going on…except it had a $65 cover. I would have considered paying for it, but since I had to leave for the airport around 10:15, it made no sense.

Next to the main entrance of the party, I noticed a sign for a NYE party with only a $15 cover. That sounded way better, so I walked over to the bar. It turned out to be the only country line dancing bar in all of Hawaii! Line dancing is one of my main hobbies, so I was overjoyed. 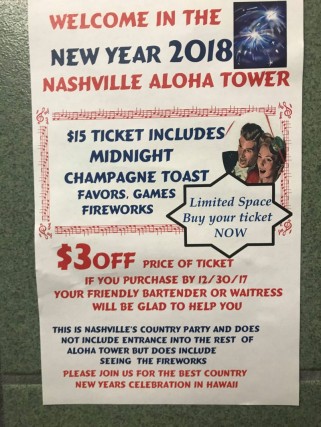 Before going out to dance, I told the bartended how I had already celebrated New Years in Guam. He thought it was awesome and bought me a beer! I then offered to buy him a shot and he replied by buying me another shot!

At 10:15 pm after about 2 hours of line dancing, it was time to head to the airport. I got another Uber and made it to the gate at 11 pm. I killed the rest of the time at the airport bar.

We boarded the plane around 11:40 pm and pulled away from the gate at 11:55 pm. The taxi took about 10 minutes and we took off at 12:05 am. The plane soared over the numerous firework shows lighting up the Honolulu sky. Honolulu has better firework displays than most cities due to the large number of Chinese immigrants who spend tens of thousands of dollars to have their own legal firework shows. 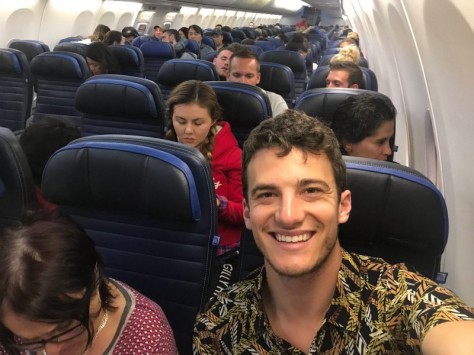 5 hours later at 7 am, I landed in Los Angeles exhausted but overjoyed for having successfully celebrated the Double New Year’s.