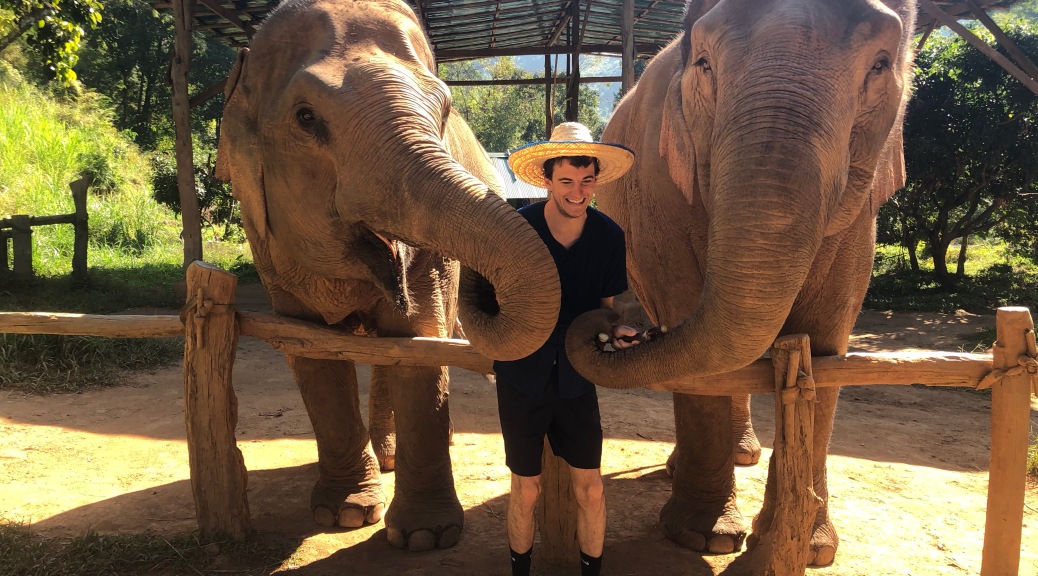 Chiang Mai’s biggest attractions are the elephant camps. Thailand has approximately 4,000 elephants. Of those, half live in captivity. Once an elephant has lived in captivity, it is nearly impossible to release it back into the wild. Historically, elephants were used for labor. Today that is far less common and most captive elephants in Thailand are now used for tourism purposes. Chiang Mai seems to be the most common place for tourists to visit elephants. Therefore it is no surprise that there are many choices when choosing an elephant camp to visit.

In the past, most visitors to elephant parks rode the elephants. However, during the last 3 years, tourists have become aware that riding elephants is abusive (I unfortunately experienced this when riding an elephant in Mysore, India). Instead of riding, these elephant camps allow visits to take care of the elephants instead. Most white people marketing materials in Chiang Mai use the no-riding as a major selling point. However, Chinese and Thai tourists still want to ride the elephants and take pictures.

After asking around and looking up reviews in my guide book, I picked the Elephant Nature Park, the original pioneers of the no-riding movement (the founder actually received multiple death threats over this). The park has many types of tours (well over 10) for around the same price (FYI, elephant tours are NOT cheap). I selected one of the smaller tours. Instead of visiting the main elephant park, I instead would get to visit a locally-owned camp where the Elephant Nature Park convinced the owner to stop elephant riding in exchange for a steady stream of tourists. Elephants are a valuable commodity and the primary stream of income for these people, so visiting this park seemed like a responsible move.

The elephant camps are not actually in Chiang Mai. They are all a 90 minute drive away. After being picked up at 8am, my group of 4 (me, a lady from LA and a couple from the Netherlands) headed north through a gorgeous green valley. At 9:30, we arrived at our beautiful camp by a river.

We started the day by chopping an incredible amount (at least 100 pounds) of sugar cane and banana stalks. Elephants eat 10% of their massive body weight every day (now I realize why these tours are so expensive). Then we walked over to greet our three new elephants friends! 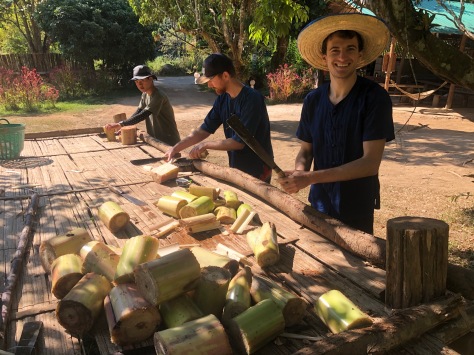 The three elephants could apparently smell the food and were eagerly waiting for us.

We spent 30 minutes feeding them with the help of the mahouts (elephant trainers). The mahouts have a very strong bond with the elephants and are paired with them for life. The best way to describe this relationship is like a Pokemon and its trainer.

Then we took the elephants on a walk on a nature trail. Even though the elephants are extremely friendly, it is very important to be careful around them. Because the elephants are so humongous, one small accidental flick from their trunk could send you flying. At one point, they cornered me to eat a banana I was holding. After giving up the banana, they backed away…with a big smile!

We let them eat wild plants in the jungle and then headed back to the camp for lunch.

About 45 minutes later, we chopped up another 100 pounds of banana leaves and sugar cane for the elephants. I cannot believe how much food they eat!

Then we walked the elephants to a stream for a bath. They first crossed the stream  on their own- an incredible sight! We met them a ways downstream where they could lay down in the calmer water. We washed them with buckets. It was incredible, especially when they stood back up!! Especially when they got back up.

After getting clean, the elephants walked over to a mud pit to cover themselves again with mud… So much for the bath! Actually they use the mud as a sunscreen. As the elephants bathed in the mud, I got pelted by a bit of the debris.

After cleaning up we headed home. Everyone passed out on the bus. We arrived back in Chiang Mai at 4pm.

While expensive and touristy, visiting the elephants was well worth it and a highlight of my Southeast Asia trip. To spend quality time with these giant and gentle animals is just so special. Additionally, I felt like my money was being used to help both the animals and the local community. A win-win in my book!