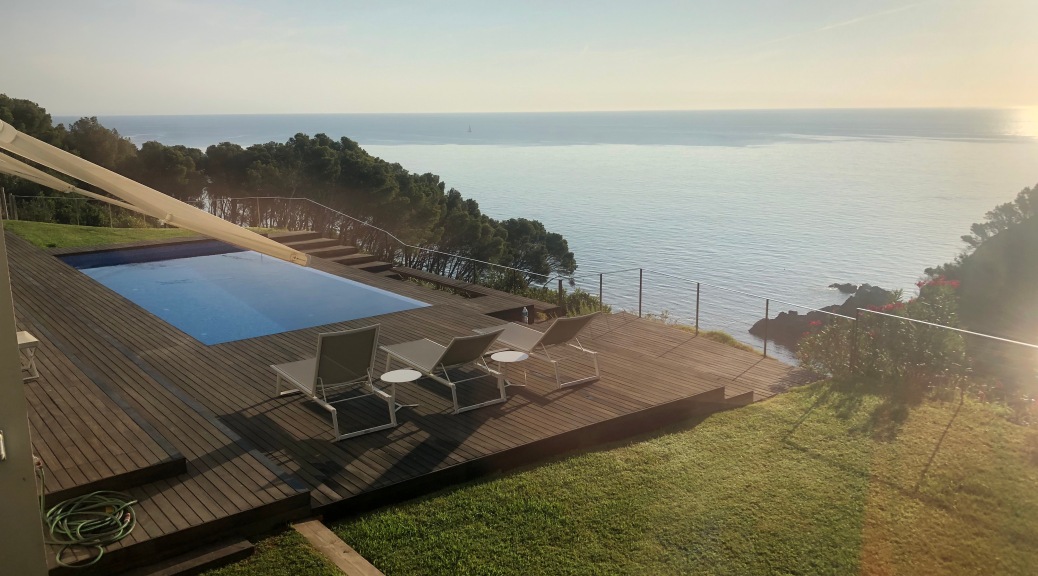 The Costa Brava is a region just north of Barcelona. People in Spain and all over the world come for the combination of beaches and beautiful towns. Two of my neighbors back in Los Angeles, Paula and Bruce,  have a house in the Costa Brava and invited me to stay with them for a weekend. I took them up on the offer (no brainer).

Their house was located in the town of Begur in the middle part of the region. While you can take a direct bus from Barcelona to Begur, I decided to instead take the high speed train to Girona and then rent a car. The car gave me the flexibility to explore other parts of the region, while avoiding the Barcelona traffic.

The train/car combo took me about 2 hours to reach Begur. Once there, I met up with Paula and Bruce in the center of Begur. Normally, Begur has 4,000 residents, but in the month of August (when Spain goes on vacation), there were 40,000 people living in Begur! As a result, the town was incredibly lively, but finding a parking space was difficult. We ate a typical Catalan dinner before heading back to their house about 10 minutes out of town. They had to leave to pick up Paula’s brother and sister-in-law from the Girona airport.

I awoke to a stunning view of the blue Mediterranean Sea!!!

Paula starts every day with a swim with her girlfriends and let me tag along. We drove down to a nearby beach village called Sa Tuna and met up with 5 other ladies. None of the women were from Spain but all now live in Begur for large portions of the year. Our goal was to swim to a beach 500 meters away but the tides were a tricky so we had to stop just short of the beach. This was my first time fitness swimming in a while and I struggled with the breathing. I survived but got a great workout! Afterwards, we all got breakfast at a local café.

Later in the morning, we walked part of the Cami de Ronda, a long-distance trail stretching along most of the Costa Brava. This particularly scenic section of the trail skirted the cliffs high above the sea.

We ended at a nearby packed beach called Sa Riera.

We didn’t stay long at Sa Riera and instead headed to lunch at a restaurant near the house. The views from the restaurant were incredible and so was the food.

For the afternoon, I decided to explore a bit on my own. Bruce steered me towards Empuries about 45 minutes north of Begur. Empuries was both an ancient Greek and ancient Roman settlement. Empuries is unique because the Greek and Roman towns were built side-by-side. Almost everywhere else, the Romans built on top of the Greek town.

Empuries was incredible! The Greek and Roman towns were quite different from each other and both well-preserved. Also worth mentioning is the audio-guide: perhaps the best audio-guided tour I have ever taken.

On the way back into Begur, I noticed a large castle on a hill and decided to climb to it. The castle, Montgri, is a major landmark in the region because it can be seen from everywhere.

The hike took about two hours total and had amazing views of everywhere I had been so far on the trip.

For dinner, I met up with everybody back in Begur. But first I stopped to see the sunset from the top of the ruined 1,000-year old Begur Castle.

Sunday morning started with another swim. This time, I was given goggles and a snorkel which changed everything. My breathing improved drastically and I was able to swim the entire course with ease. The goggles also allowed me to see into the sea where there were thousands of small fish!!

Afterwards, the five of us took a trip to the nearby Palafrugell to see the Sunday market. Palafrugell is the largest city and commercial center of the region. It is located just 15 minutes south of Begur. The Sunday market, located in the center of town, regularly draws hundreds of locals looking to shop for everything from fresh seafood to clothing. Today was no different. Tourists do not normally venture to Palafrugell because it is neither medieval nor on the coast. In my opinion, there wasn’t anything of interest to buy but the atmosphere was quite fun.

In Palafrugell, I said goodbye to my hosts and headed off on my own back towards Girona (with a few stops of course). My first stop was the town of Peratallada: a medieval town highly recommended by my hosts.

Peratallada was pristine and perhaps the most beautiful town I’ve ever visited. Besides wandering and eating, there really isn’t much else to do. The town’s castle is a private home. A visitor can probably spend at most 60 minutes wandering around Peratallada. Of note in the town is a Gelats Angelo, a gelato shop that claims to be the best in the world. In addition to the normal flavors, they had savory flavors such as gazpacho and sardine. I tried the gazpacho and lemon (in separate cups) and was blown away.

My next and final stop was the Castle of Pubol. This castle, in the middle of a tiny town even smaller than Peratallada, is quite special. In 1969, Salvador Dali bought the castle for his wife Gala. He renovated it and transformed it into a masterpiece. The interior had medieval décor twisted in true Dali fashion. One great example was a tapestry with a flaming giraffe painted on top. Gala is buried in a crypt in the basement.

From Pubol, it was an hour drive back to Girona which included a scenic detour through the mountains.

I had the best time in the Costa Brava. The rural beauty and small towns contrasted with my life in bustling Barcelona. Beyond the contrast, the region has many incredible sights and is truly a world-class destination in its own right. I cannot wait to see more on my next trip to the Costa Brava!

Having a delicious week in Mexico City 🌮 🇲🇽
I have a new blog post on my early April trip to #Albany, the capital of New York. I also took a side trip on an underground boat ride at Howe’s Cavern.
Had the best weekend celebrating the wedding of my cousin @jjacobs369 and @elizabethrb !!! Loved getting to reunite with family.
At long last, my Dubai blog post is here! While on the surface, Dubai might seem like a Middle Eastern Las Vegas without gambling, there is actually a lot more going on. I spent a lot of effort on this post. I hope you enjoy it.
NEW BLOG POST on my trip to the World Expo in Dubai. This was without a doubt the grandest and most spectacular event I have ever attended. Imagine Epcot but with 191 countries.
5 years of the BCaster AHess Friendship Adopt-A-Highway in Albuquerque, New Mexico. Always a pleasure cleaning the road with you @andhess
Loading Comments...
%d bloggers like this: