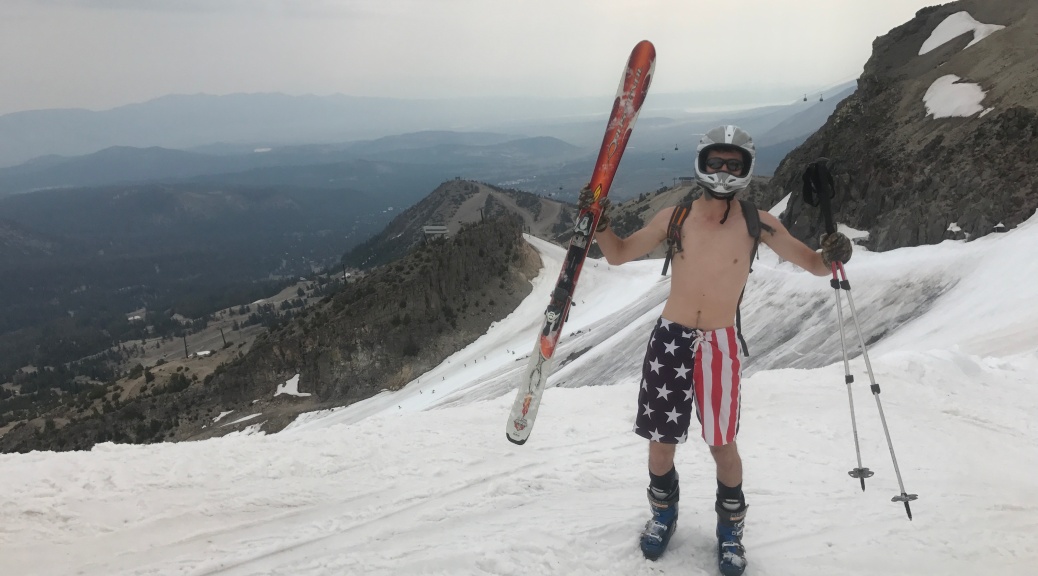 I had been hearing of the monster 2017 snow year in the Sierras all year. In June 2017, Mammoth Mountain got a 10 inch snowstorm and the rumor was that they might be open all the way until August. In July, I received word that Mammoth was indeed going to be open for the first week of August for just the second time in its history. For the novelty, I decided to go.

I had a 3-day weekend from work that first weekend in August, but had to be back in LA on Sunday, so I decided to drive up Thursday after work and ski Friday, Saturday before driving back Saturday night. My friend Andrew in San Francisco was also interested, but could only meet up with me on Saturday.

On Thursday at 5:30 PM, I started the drive up the US 395 towards Mammoth Lakes. It was 107 degrees outside in the Antelope Valley-not exactly skiing weather.

At 10 PM, I was getting tired and decided to camp near the town of Big Pine, about 75 minutes from Mammoth.

The next morning, on August 5th, I woke up at 5 AM and drove into Mammoth Lakes. Lo and behold, I could see some snow on the mountains.

After getting my bindings checked, I headed to the main base and purchased a 2-day lift ticket for $140. The mountain was open from 7:30 AM-12 noon.

It was about 60 degrees, so I wore board shorts and a long sleeved t-shirt.

I hopped on the gondola and headed up to the mid-mountain McCoy station at 10,000 ft, the base of the ski operations. 3 runs were open: the double black run Climax, the black run Cornice, and the blue run Saddle Bowl. Each run was accessed by its own lift. The entire rest of the mountain was snow-free. I think the ski resort added salt to the snow.

I started with Climax, which required taking the Gondola to the very top of the mountain at 11,059 ft. From the top, I had to walk through a dirt field over to the edge of the run, which had snow, strapped on my skis and dropped in for my first turns of the season.

The snow was actually really nice- not that it mattered. The crowds were light too. I never waited more than 2 minutes for the lift plus I got to see all the skiers in interesting outfits. Many people were in t-shirts, bikinis, and costumes. 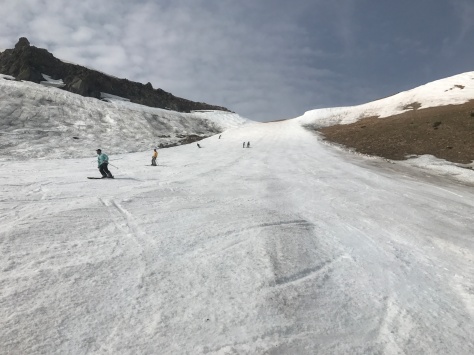 For most of the day I alternated between skiing the Cornice and Saddle Bowl. Climax involved taking off my skis twice and walking a few hundred yards, which meant less skiing.

Around 10:30 AM, it started to get really warm- all the way up to 75 degrees and I was getting hot in my t-shirt. So, mainly for the novelty, decided to ski shirtless! 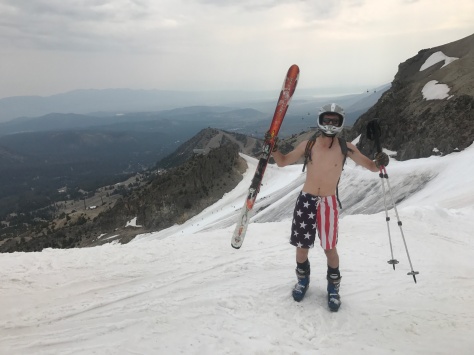 One downside to skiing shirtless is that the metal back of the chairlift was very cold on the skin. Otherwise, it felt amazing. One lady commented that I was as close as you could get to skiing naked, which was her life’s dream.

By 11:30 AM, I got bored of only skiing 3 runs, so I called it quits. At the McCoy Station, a lady had set up a temporary bar with a sign “I Skied in August”. I purchased a Coors and took my picture in front of the sign.

At noon, I took the gondola down and walked back to my car as the numerous hikers and sightseers stared at me in disbelief.

I changed clothes, got lunch, and then drove up to nearby Lake George to go on a hike since it was only 1:30 pm and there was plenty of daylight left. The hike took me all the way to the Mammoth Crest- the top of a mountain ridge on the border of the wilderness. I hiked for about 3 hours.

Just as I made it back to my car, it started to rain. With nothing better to do, I then headed to the Mammoth Brewing Company for a celebratory beer flight.

It was now 6pm and I still had 2 more hours of daylight, so I drove over to the Wild Willie’s Hot Springs about 20 minutes out of town. There, I soaked in the natural hot tub and watched the sun set. It was a fantastic day and I couldn’t wait to do it again.

After dinner in a local Mexican restaurant, I found a free campground 15 minute north of town. I then sent my location to Andrew and went to bed. He arrived with his girlfriend Shelby around 1am.

Day 3: Doing It Again With Friends!

We all woke up the next day around 6am and headed to the slopes. Andrew and I decided to wear Hawaiian shirts and board shorts. Shelby decided not to ski.

Saturday was more crowded than Friday on the slopes. Sometimes I had to wait up to 3 minutes to get on the lift (instead of 2). Additionally, ski patrol closed Climax so it was just Cornice and Saddle Bowl. We bombed the runs until about 11 AM until we decided to call it quits.

Andrew and I then met Shelby at the base of the gondola, got lunch and hopped on a bus to the Devils Postpile National Monument. The bus ride took about 30 minutes and we were suddenly transported to the High Sierra backcountry.

Devils Postpile is a very small National Monument but has two spectacular sights. The Devils Postpile is one of the world’s finest examples of columnar-jointed basalt. The volcanic rock solidified into  60-ft tall hexagonal prisms. Hexagons are apparently stable shapes.

We also hiked an extra half-mile to see the less-impressive but also less-crowded Lower Falls.

When we got back to the bus stop, there was a huge line and we had to wait nearly an hour to get back on a bus. We were exhausted and luckily were able to nap despite the ramblings of an out-of-their-element Goth group.

Back in Mammoth, it started to rain so we went to the newly opened Black Doubt Brewing Company where of course we saw the Goth group. The beers here were unusual and in my mind better than Mammoth Brewing.

Finally, we headed back to the Wild Willy’s Hot Springs for another sunset.

It was unfortunately time to head back, so I packed up the car and drove the 5 hours to LA.

Summer skiing in Mammoth was fantastic because it afforded the opportunity to do lots of different activities. Oftentimes, ski lift tickets are so expensive that you feel obligated to ski all day. Mammoth’s lift tickets were only $70. Plus, the weather in the winter is so cold that skiing and drinking are all you can do. However, in the summer, people can go hiking, swimming, mountain biking, hot spring-ing and golfing all in the same day! There is nowhere else where you can do that.