For part of my spring break, I went to Philadelphia, a new city for me. On Saturday afternoon, I was walking back to downtown after getting a cheesesteak at Pat’s in South Philadelphia when I saw a group of about 80 people congregating in a park. They were all wearing green dresses (even the men). In small groups they all started to run down the street in the opposite direction of where I was planning on going. Since I had no plans, I decided to follow them like Alice following the white rabbit. After running with them for about 5 minutes, I asked one of the runners, a older man in a fairy costume, what was happening. He said it was a beer run. I then asked if I could tag along and he said sure!

As I ran with them, I learned a bit about the group. They are called the Hash House Harriers, an international group founded in Malaysia around World War II. There are over 4,000 chapters of this “drinking club with a running problem”. I happened to stumble upon their 27th annual green dress run.

The run was following chalk marks or flowers on the ground. When passing a trail marker, everyone would yell “On-on” to signal that they were on the trail. We ran by all the major landmarks of Philadelphia including: City Hall 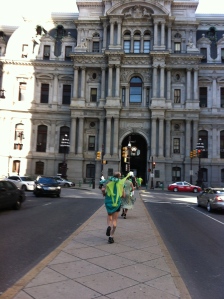 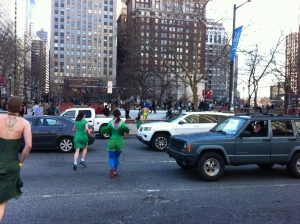 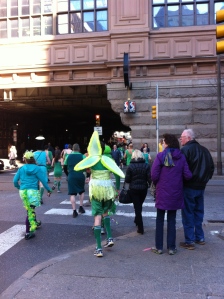 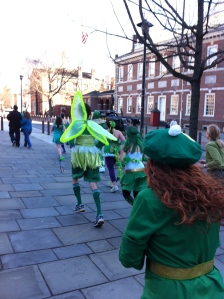 Near the federal courthouse, we went down a staircase into an underground garage. There we found a car parked and in the trunk there were about 200 beers. This was the first beer stop.

Everyone in the Hash House Harriers (H3) has a vulgar nickname that is determined by the group after you do something funny, stupid, or otherwise noteworthy. My new friends were named Tits O’ Steel, Tube Cock, Rear Engineer and Freckles. Once you have a nickname, the group makes a bead necklace with your name so people remember it. Because I was a first time runner, I was “Just Bryce”.

We then ran to our second beer stop, which was at the top of another parking garage. In addition to beer, we also had jello shots at this stop.

After the second beer stop, we ran to an Irish bar called Paddy Whacks, where the run actually began. They had a 3-hour open bar for the group and a free food buffet (actually there was a fee for the event, but they waived it for me). 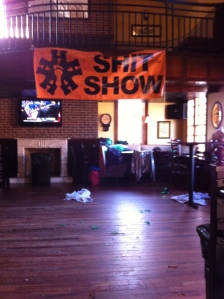 The party then got rachet. After a bit, everyone gathered in a circle where they started singing drinking songs. Eventually, they made me go into the middle of the circle and drink a couple cups of beer while they heckled me. Eventually, they let me go and said I was now part of the group, although I still do not have a nickname yet. The event was so much fun and I would certainly recommend doing a Hash run locally.