Having been to 47 states, I set my sites on Vermont. From California, inland New England is extremely inaccessible, which is why I had been avoiding the trip. But with the Columbus Day long weekend available, I figured that this would be a fantastic opportunity to visit. October is also peak fall foliage, so I would get to see the legendary New England fall colors.

There are no direct flights from Los Angeles to Vermont. The closest airports are Boston and Montreal. The Boston flights were much cheaper (I was able to redeem an American Airlines flight voucher, so the whole thing cost me just over $100- hard to beat that). Since I had to drive through New Hampshire to reach Vermont, I figured it would also be a good time to spend time in the Granite State.

I have been to New Hampshire before – just barely. Back in 2001 during my father’s college reunion in Boston, I went to an amusement park a whopping two miles over the New Hampshire state line. There, I went on my first ever looping roller coaster so it was actually a momentous occasion in my life because I now love roller coasters.

My red eye flight landed in Boston at 6am. After picking up my surprisingly expensive rental car, I drove over to my cousins’ house in the suburbs to nap for a couple hours and to catch up. At 11, I drove about 90 minutes to the town of Jaffrey, New Hampshire. 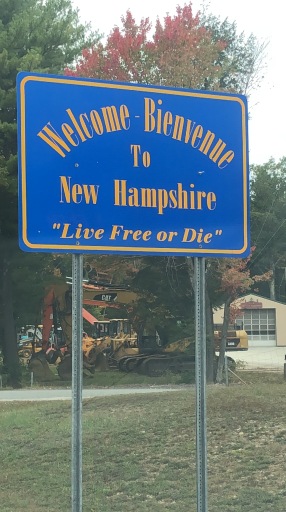 There, I got lunch at the Kimball Farm (an outpost of the legendary Massachusetts family attraction). It was a little too cold for the famous ice cream so I settled for a bowl of clam chowder. Kimball Farm also had a gift shop that sold tacky fall gifts (there must be at least 1,000 gift shops like this around New England).

I quickly drove through the center of town. It was packed for a fall festival. It seems like every town in New England has some sort of fall festival or art festival during the month of October.

On the west side of Jaffey is Mount Monadnock. At 3,165 feet tall, it towers over the surrounding forest. In fact it is 1,000 ft taller than anything in a 30-mile radius.

Mount Monadnock is actually somewhat of a famous spot. It happens to be the 2nd most climbed mountain on earth (after Japan’s Fuji) – most likely due to its proximity to Boston. It also is the namesake of the geological term monadnock, which means a lone isolated non-volcanic mountain. Scottsbluff in Nebraska and Stone Mountain in Georgia are other good examples of a monadnock. 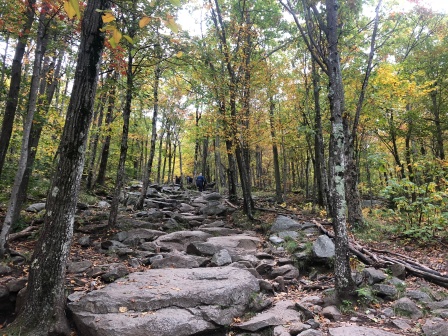 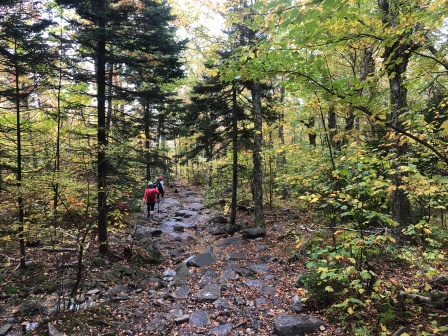 The shortest and easiest way up the mountain is the White Dot Trail. It was billed as taking 2 hours each way for a grand total of 4 hours roundtrip. The first half of the trail involved climbing up steep rock. It wasn’t quite rock climbing but it was more challenging than a standard hike (Class 2 scramble on the Yosemite scale).

Eventually, the trail levels off and there are stunning views of the surrounding terrain. Despite the tough terrain, there were hundreds of ill-prepared hikers on the mountain including young children and tourists in t-shirts. Why does everyone climb this mountain? I have no idea. 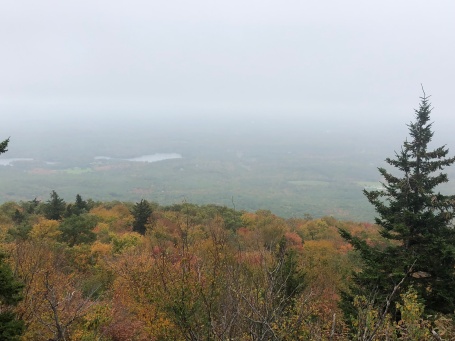 The top of the mountain is completely covered in solid rock and is above the tree line. Here the trail is painted on the ground. Unfortunately, this part of the climb was in a windy fog. The temperate dropped to the low 40’s. 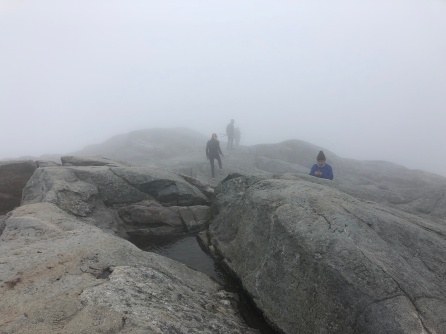 This section took me about 10 minutes at which point, I reached the summit, which was completely covered in fog. Visibility was no more than 50 feet. I stayed at the summit just long enough to take a picture. Total time on the ascent was 80 minutes.

On the way down, I followed what I thought was the correct rock marking. An older man, who followed me to the top, informed me that we were on the wrong path (there are about 5 trails to the summit). That was confirmed by another person we met. After a short discussion we were able to navigate our way off-trail to find the White Dot Trail again.

My new friend turned out to be from Fresno, California and does trail maintenance in the Sierras. He reminded me a lot of my late friend and inspiration Mike Murray (that must have been why we gravitated towards each other). We chatted about various adventures in the mountains for the entire 80 minute trip down as we passed other groups right and left. As we parted ways, he said I was living life the right way, which meant a lot coming from someone who has lived as much as him.

From Monadnock, I continued west for 15 miles until I reached the town of Keene. The town is best known for its infamous Pumpkin Festival as well as being the filming location for the original Jumanji.

I spent the remainder of the afternoon and evening walking the quaint downtown, which features a typical New England town square. In addition to Main Street, I also checked out the local college Keene State University and a brewery. I got dinner at the Stage Restaurant in downtown- it was recommended by 3 different people as the best in Keene. They had a smoked clam chowder which was easily the best chowder I have ever had in my life.

I stayed in an AirBNB house that used to be a church a couple blocks out of downtown.

I was so tired from the flight and hike that I slept for 12 hours!

The next morning, I drove up along the Connecticut River to the town of Cornish. Along the way, I stopped at the incredible Cornish-Windsor Covered Bridge. 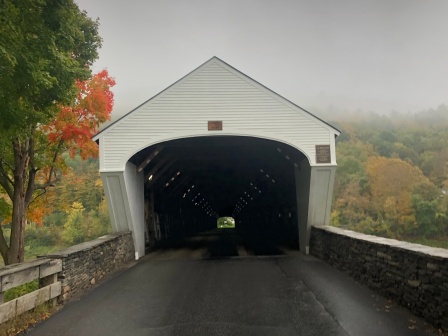 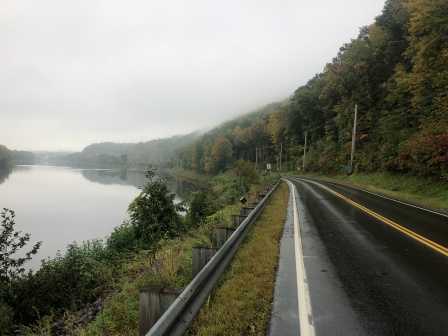 A few miles north of the bridge is the Saint-Gaudens National Historic Site – New Hampshire’s only National Park Service unit. Technically the Appalachian Trail is also an NPS unit but the trail is managed by the Dartmouth Outing Club and not the NPS in New Hampshire.

The site contains the home and studio of Augustus Saint-Gaudens, a famous American sculptor. He sculpted many of the large statues found in public parks in the eastern United States. Some of his most famous works include Lincoln in Chicago’s Lincoln Park, the Robert Gould Shaw Memorial in the Boston Commons and the Adams Memorial in Rock Creek Cemetery in Washington DC. He also designed a double eagle coin which was used by the US mint from 1905-1907.

While his works are displayed in major cities, he sculpted them out of a barn-studio in the remote town of Cornish, New Hampshire. Eventually, another 100 artists would follow him to Cornish, creating the Cornish Art Colony which remained vibrant from 1885-1907 when Saint-Gaudens died.

The park contains his home, studio, field, and woods which are all self-guided. I was able to meet a couple rangers and the sculptor-in-residence along the way.

The entire visit took about 90 minutes.

From there, I headed onward to Vermont!

While overlooked by most travelers, New Hampshire has much to offer! The landscape- especially in the fall- is pristine and gorgeous. As one of the original Colonies, there are plenty of historic sites. And the mountains offer plenty of amazing hiking opportunities – I didn’t visit but the White Mountains in northern New Hampshire contain some of the tallest peaks in the East.