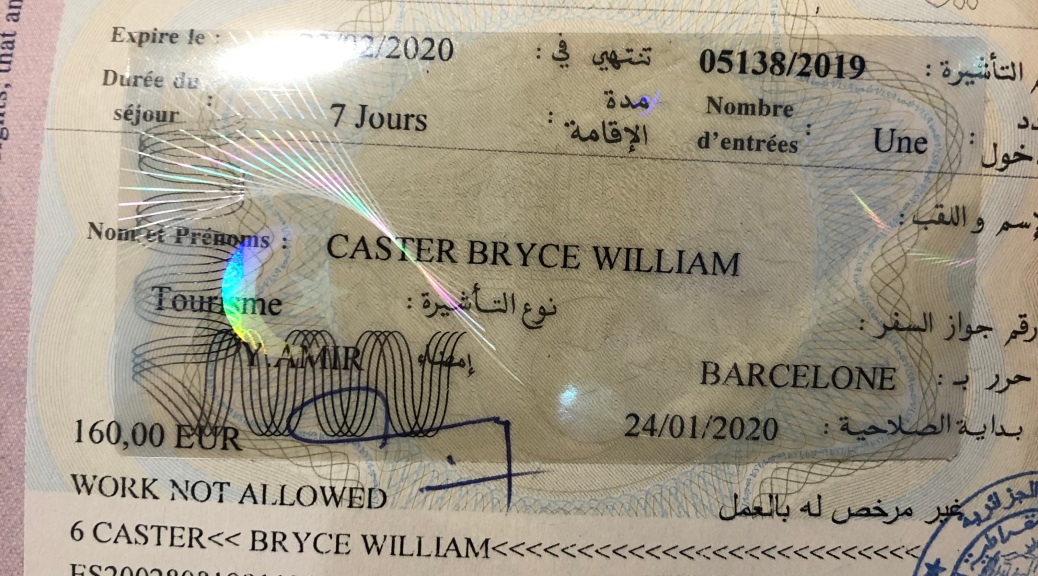 Having never been to North Africa, I set my sights on Algiers for a 4-day trip for early August before my MBA classes started in Barcelona. Algiers is shockingly only a 45-minute flight from Barcelona.

Unlike its North African neighbors, Algeria requires a tourist visa and accompaniment by a licensed tour guide. According to many forums of well-traveled people, the Algerian visa is one of the most difficult to obtain. Having navigated a few tricky visas such as Congo, India, Kazakhstan and the Spanish student visa, I went to my trusty visa expeditor to ensure I get it right. At the same time, I reached out to a highly recommended tour guide.

After filling out the forms and shipping them to the Algerian Mission to the United Nations in New York, I waited.

There is a popular slogan among travelers to Africa: TIA (This Is Africa). When visiting the continent, expect the unexpected. Even the most straightforward process will be complicated, logic-defying, and possibly corrupt.

One week later, I received a call from the consulate. They told me that my forms were all fine, but there is an extra item not listed in the requirements. My guide needed to obtain approval from the mayor’s office of each town where I would be staying. In my case, this would be Algiers, the largest city. This seemed like a difficult, but not impossible task.

I checked in every day. While my guide apparently submitted the paperwork, the mayor’s office did not process it and gave no reason. After eight weeks, I needed my passport and gave up. Algeria would have to wait.

August came and went. Instead of Algiers, I went to Porto.

I was in the IESE cafeteria chatting travel with my friend Angus. He mentioned how he wanted to visit Algeria. I told him about my struggles in New York and that Algeria forces you to apply in your country of residence. Angus said that our Spanish student IDs count as Spanish residency, allowing us to apply at the consulate in Barcelona just 10 minutes from school. Hope was renewed!

Given Spain’s close proximity to Algeria, the visa requirements are considerably more relaxed. The main difference is that independent travel is allowed, which means I wouldn’t need a guide to certify or obtain paperwork!

With less free time. The requirements were expensive, but straightforward and I submitted the paperwork in person during my lunch break. The next week, I picked up my shiny Algerian tourist visa!

Visa in hand, I then contacted Omar from Fancy Yellow tours to arrange my trip.

Part 3: One Final Scare in Algiers

The Air Algerie flight from Barcelona to Algiers took just 45 minutes. Everything went smoothly until I reached the immigration desk. The officer asked me to fill out a form which was only in French or Arabic. With the help of Google Translate, I got it done. Then he asked if anyone was showing me around. I said yes and showed him my guide Omar’s contact information. The officer asked then me to call him, which I was able to do using WhatsApp. They talked. For a long time. I was worried, but the officer said there was nothing to worry among.

He told me to call Omar a second time. This time the guard made me walk to the exit of the airport with him to greet Omar in person. Then I had to walk back to the immigration booth while Omar went through security. We all met up at the immigration booth. Then, the guard took Omar’s information and ran it into the system. Omar was now personally responsible for me while in Algeria.

The registration took 2 minutes at which point I was free to go. Omar said this guy was overzealous. Most immigration officers will let him text a photo of his tourist guide license. Omar said that this is standard practice. He said that the government does not receive many tourists and is apparently paranoid of foreigners. Despite the scary first impression, Algeria is safe- the crime rates are considerably lower than the US.

We got into his car and drove along a freeway lined with palm trees. We passed through about 5 police checkpoints. Omar said the police are everywhere- Algeria spends approximately 40% of its budget on defense making it among the top 3 defense spenders on earth. Despite the fact that TIA (this is Africa), the police were not corrupt. The only rule was to not take pictures in the presence of police.

We got a quick meal at a sidewalk cafe that could be in France. I ordered a panini and weirdly enough a taco.

Then we headed to my hotel, the very swanky Radisson Blu. The hotel had an airport-style metal detector (standard practice in fancy hotels in countries with large Muslim populations). When checking in, the credit card machine was struggling to connect to the internet to process my card. Take it from me, there are fewer things scarier when traveling than having issues with credit cards. After 5 minutes, it worked.

My room was beautiful! I immediately went to bed to rest up for my big day tomorrow.

Interesting series of events yesterday in extreme northern Maine. I asked a lady to take my picture in front of this sign designating the terminus of US-1. We then started chatting and she invited me to get lunch with her childhood church friends visiting from Texas. She then invited me to her 300 person hometown, Stockholm, Maine which is a Swedish immigrant colony from the 1870’s. After a thorough tour of the town’s impressive history museum, I got a haircut.
I have a new blog post on my July trip to Costa Rica to attend the wedding of my college friends @kremerbg and Becky! If anybody is planning a wedding, I would highly recommend a destination wedding.
Celebrating 5 years with @maisie_schloss
🌋 New Blog Post 🌋 before heading to a wedding in early July, I spent 2 days exploring the UNESCO-listed forests and volcanoes of northwestern Costa Rica.
NEW BLOG POST:
🚨 Proud Boyfriend Alert 🚨! Congratulations to my girlfriend @maisie_wilen on the launch of her Spring/Summer 2023 collection at @nyfw . This show was the biggest and most spectacular one yet!
%d bloggers like this: