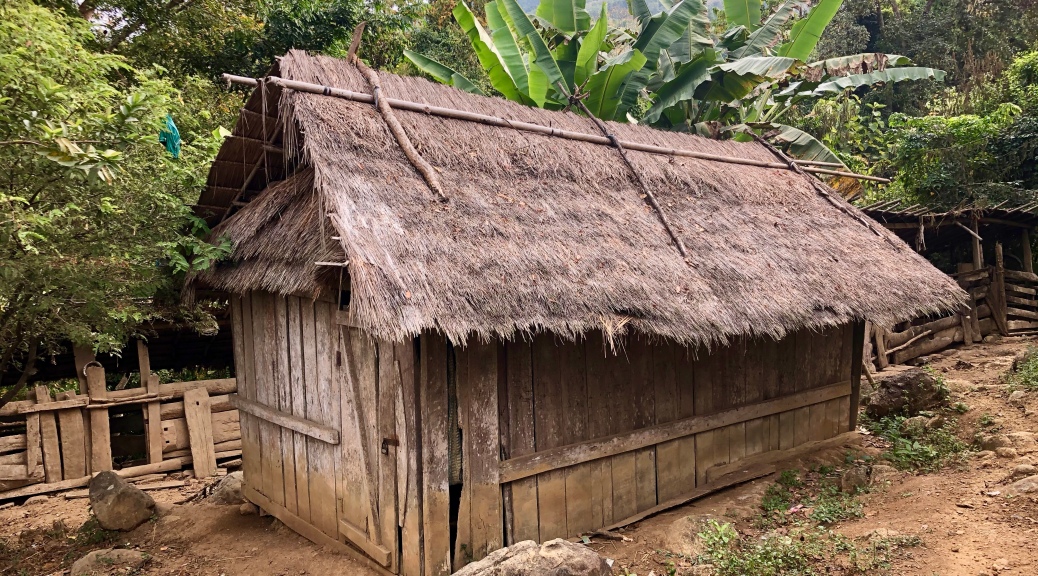 This was a big day! My friend David connected me with Varleaung (pronounced vah-leng), one of the staff members at the On The Mekong Resort in Luang Prabang, Laos. Varleaung was going to take me to his home village and show me around. Varleaung speaks limited English and I speak zero Hmong. This was going to be an adventure and I was prepared to just go with the flow!

Laos has a number of ethnic groups, but Varleaung is Hmong. The Hmong originated in China many centuries ago. Today, the Hmong live in southern China, Laos, and Vietnam. The Hmong are perhaps most famous for helping out the US government in resisting the Communist forces during the Vietnam War and the “secret war” in Laos. In exchange for their help, the US Government allowed some Hmong to settle in the United States. As a result there is a large Hmong diaspora in the US- mostly in Minnesota and Southern California.

At 7 AM, Varleaung and I got on his motorcycle and headed out. We first stopped at the local market to purchase pork and candy as gifts for the villagers.

Then we crossed the Mekong on a ferry.

We motorbiked through the green hills of Laos. The paved road was in impeccable shape (most likely Chinese-made). I was told that the road became paved just a few months ago.

After an hour, we pulled off onto a high-quality dirt road. We took the dirt road through rivers and past villages. An hour later we reached our village or should I say Varleaung’s village.

Our first stop was at the local elementary school. There, I gave the candy to the teacher who gave it to the children. They were very appreciative. The school had approximately 60 students up to the age of about 12. Past this age, children go to a boarding school near the paved road.

The village itself had wooden huts about 20. Most had grass/thatch roofs but there were a few corrugated metal ones. All the homes were single-story but a few, including Varleaung’s parents’, were built so high above the ground that they were functionally two-story.  Our tour took about 10-15 minutes.

Then we got breakfast/lunch around 10am in one of the houses. We ate with 3 local children. Meals here are communal. While we each had an individual spoon, the dishes were shared. Hmong eat their meals close to the ground. We sat on stools just a few inches high. The meal consisted of vegetables, rice, and some soups including one with pork and lemongrass. While nothing fancy, the food was tasty.

Throughout my tour, I got a few stares, but in general the people didn’t seem all that interested in me. Nobody wanted to talk to me or touch me or really anything. I didn’t mind this at all- they probably had things to do. 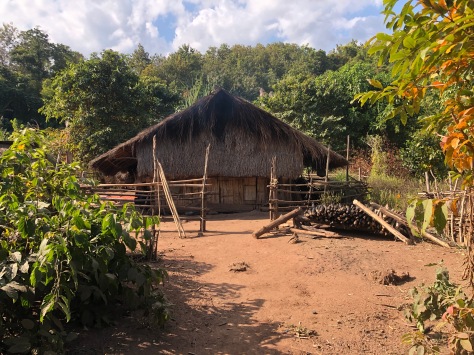 We then visited two more nearby villages. Each were 5 minutes away by motorbike. In the second village, we got to go into Varleaung’s friend’s house- they had huge storages of rice. The grandpa was smoking a huge bong of opium. Wild! While I couldn’t communicate with them, I decided to show them pictures of my life in Barcelona and the United States.

It was getting hot, so we headed back to the main village and I took a crucial two-hour nap. It was now around 3 PM. Varleaung then took me on his motorbike to see a farmer. The farmer lived alone near a creek and was very shy. I was most likely the first white person to ever come visit her (I was reportedly the 2nd foreigner to visit the village and David didn’t visit the farmer). The farmer was very old and had a daughter carrying wood. Peppers were drying outside the house. We then walked over to her fields. While she didn’t produce any rice, there were plenty of other plants including corn. While not part of the Hmong diet, corn is used as feed for animals. The fields were protected by barbed wire.

By the time we got back it was late in the afternoon. The kids were home from school and approached me. I used an old trick to get the kids to like me: a selfie photo shoot. The problems is that many of these kids had access to cell phones and were not amused by cameras (yes even here- they watch Thai YouTube videos for entertainment).

So I opened Snapchat and used the face filter feature- something that has never seen before. The Snapchat filters got their attention. They found the filters absolutely hilarious and crowded to get into the pictures. Each time someone’s face would change they would die of laughter. This went on for nearly an hour until my phone battery was nearly gone. Around 4:30 pm the sun started to lower. As I walked over to the edge of town to see the landscape, the kids followed me and mimicked my picture taking motion.

Then the kids started playing a game using rocks altered to look like spinning tops. I watched them play with delight.  They kept playing the game until it got dark at 5:30. This could never occur today in the US- we are too digitally connected and kids get cell phones too young to be able to genuinely play without a worry or the parents would get too worried to let their kids be unaccompanied. There’s a real beauty to the village life.

At 6, we huddled into Varleaung’s parents’ kitchen. This single-building is next to the main house and has electricity- well one lightbulb and a power strip. We sat on our tiny high wooden stools and ate the communal meal. The food was very similar to the last meal: pork soup, vegetables, rice. This time we also had spicy peppers on the side. After the meal it was about 7:45 pm. With nothing else to do, we all went to bed in the communal bedroom. 11 of us slept on the upper floor of the main house.

The roosters started crowing around 2:30 but we all woke up around 4:30. Varleaung’s mother started making breakfast. The sun went up at 6. We ended up eating breakfast at Varleaung’s sister’s house. She made rice noodles in soup with chicken. We took a group picture then I unceremoniously left. No goodbye or anything. I waved but got nothing in return. I suppose that’s how it goes in the village. People have things to do.

The village overnight contrasted quite a bit with a similar experience in Congo where I was also one of the very first foreigners to visit. Here are my main takeaways:

While it is nice to see temples, eat good food, and interact with other travelers, my primary purpose of international travel is to experience other cultures. This visit was a 100% real unfiltered window into the Hmong culture. Nothing was catered to my tastes; rather they lived their lives and I witnessed. For that reason, this visit was traveling at its purest and easily the highlight of my time in Southeast Asia.