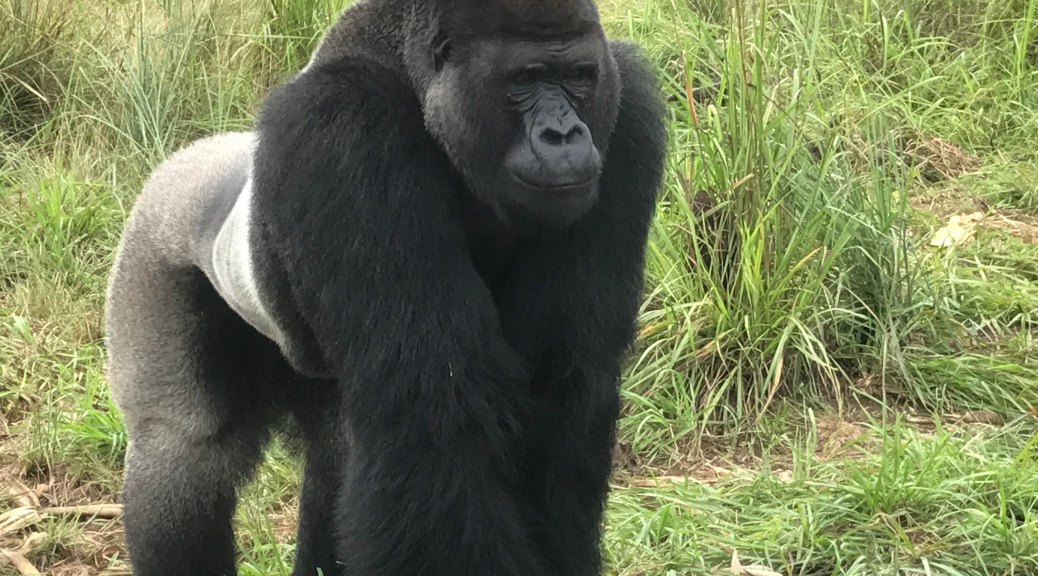 If you just want to see gorilla pictures, scroll down.

Republic of the Congo is home to an estimated 100,000 gorillas, more than any other country. Unfortunately, most of the gorillas are located in national parks far to the north, which involves taking a very expensive safari. Luckily, I read about a more reasonable way to see these magnificent creatures: the Lesio Louna Reserve which could be day-tripped from Brazzaville.

There are actually two sub-species of gorillas: western lowland gorillas and mountain gorillas. The western lowland gorillas are the ones found in Congo and are the most common type of gorilla. The mountain gorillas are far less common and are found in Rwanda, Uganda, and the Democratic Republic of Congo. There are small differences in the features of the two types of gorillas, but for the most part, they are indistinguishable to most people.

Tracking gorillas in the wild is an expensive endeavor. In Uganda, the permit alone is $650 per day, while in Rwanda the permit is $1500 per day. Add in the guides and transportation costs and you have a very expensive trip. In contrast, Congo has no gorilla permit cost. I only had to pay for the transportation (which was still extremely expensive but still cheaper than the neighboring countries). All in, the trip was $1,000, food not included. This would be the single most expensive travel day of my life, but I figured it would be a once-in-a-lifetime sort of experience.

I met the car, driver, guide, and the guide’s wife at 5:30 am at my hotel in Brazzaville. Unlike my taxi from yesterday, this car was air conditioned and my driver was wearing a sport coat.

We cruised along the Chinese-built road heading north through town and breezed through the checkpoint that caused me so much grief yesterday. Just off the road, we noticed all the incredible apartment buildings built for the Chinese workers. They truly run the show here economically.

45 minutes north of town, the road started to get bad. Like really bad. We were using the 4×4 feature in the jeep through lakes and thick mud.

Despite this being the worst public road I have probably ever seen, there were lots of Chinese trucks and taxis limping along. Some got stuck in the mud.

Two hours in, we stopped in a roadside village to pick up fruit. We got passionfruit and another fruit with tangy bright red flesh that I have never seen before. When the farmer realized that I was American, he surprisingly told me he was a big fan of Donald Trump and shook my hand. I smiled back and gave him a thumbs up (No matter the issue, I’ve found it’s best to avoid political confrontations as a tourist- it can only lead to trouble).

Just past the village, we pulled onto a little-used jeep trail. It was so overgrown that both sides of the jeep and the bottom were pushing through foliage. We maneuvered our way over a hill then into a valley and over the next hill. From the second grassy hilltop, a forest came into view. This forest was Lesio Louna, home of the gorillas.

We arrived and showed our paperwork to the rangers, who lived in surprisingly nice houses given the remoteness. After the okay, we walked over to a riverbank and sitting there on the other bank was a female gorilla!

The gorillas in Lesio Louna are not truly wild gorillas, they are actually orphaned gorillas from other parts of the country. But here they roam free and live off the land for the most part. The rangers said there are about 30 gorillas in this reserve.

The rangers led us to a boat. We got in an headed off to see the gorillas! We first stopped at the gorillas across the bank. She was hanging out on a wooden platform 5 feet away from us. The rangers threw her some of the fruit we bought.

We then zoomed up the river through the jungle. Eventually, we cruised by a large embankment. Just like that a silverback appeared out of nowhere and sprinted alongside out boat. For nearly 30 seconds, he chased us!

Continuing on, we cruised down a narrow canal and disembarked the boat. There, we entered a small fenced-off area. I soon realized that we were in the fence (oh how the tables have turned). 3 gorillas were sitting just outside the fence about 5 feet from us. For the next 15 minutes, we fed the gorillas most of the remaining fruit.

Finally, we got back in the boat and motored over to a very thick forested area. There, the ranger noticed a gorilla sitting in a tree. We tried to call it down to eat our fruit, but it didn’t work. The gorillas was very comfortable in the branches.

Finally we sped back through the backwaters to the starting point. Wow!!!

I asked if we could see the baby gorillas but was told we couldn’t for an unknown reason. We got back in the car and drove out. The plan was to visit a beautiful lake called Lac Bleu, but we got tire problems, which made reaching the lake impossible. As a result, we got back to Brazzaville very early- around 2:30 pm.

I was somewhat disappointed since I had planned for a full day on the tour. The guide understood my frustration and then took me to the souvenir market where I bought some masks. I thought I bargained well but was later told I paid about double what a local would have (My strategy was to cut quoted prices to a third and negotiate from there. Now I know how crazy the quoted markups are close to 400%).

Afterwards, I got back to the hotel and made one final stroll through Brazzaville without the distractions of my phone. I bought a croissant and encountered child beggars (and beggars in general) for the first time of the trip. Instead of money, I gave one child half of my croissant and received a look of sheer confusion.

I spent the rest of my time hanging out at the hotel and chatting with another guest who turned out to be the hardest-core traveler I have ever met. At 11pm, it was time to go to bed since I had another big day in store.

The gorillas were extremely expensive; I truly thought the experience was worth the money and the effort. To see gorillas in a wild environment is a very different experience than seeing them in a zoo. I really wish I could have been able to see the babies, but otherwise I have no regrets from the day.