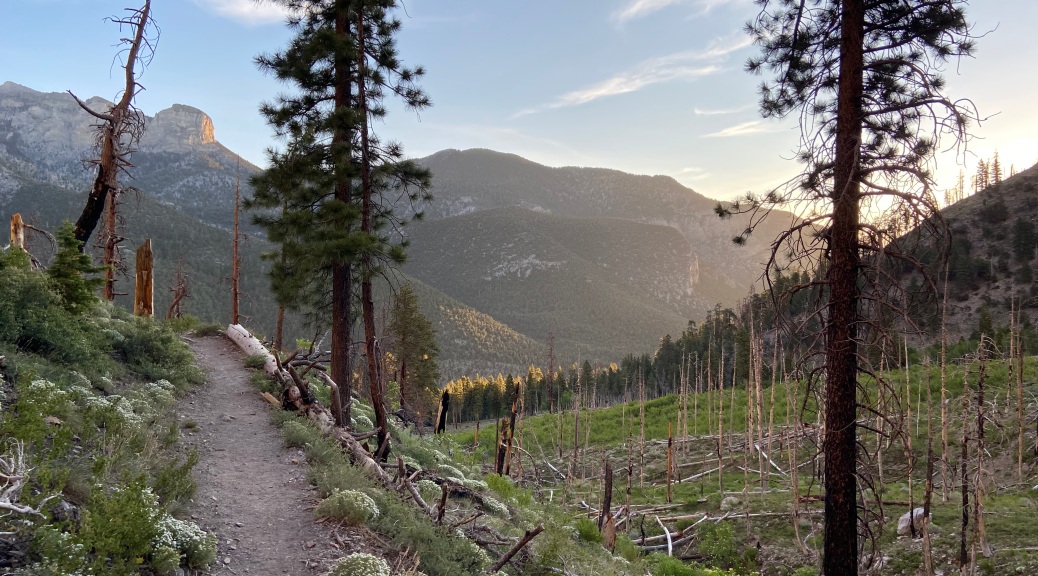 For the summer of 2020, I returned to Los Angeles for an internship at a pharma startup. Unlike in Spain, the COVID pandemic was very active in the United States where the state governments had far more power in deciding which business can open. California had much more closed than its neighbors. One aspect of the closure was a temporary suspension of issuing wilderness permits in the Inyo National Forest. This limited the potential hikes I could do.

Thinking a little outside the box, I decided to look to mountains outside California that were within driving distance (realistically this was Arizona and Nevada). After some research, I settle on Charleston Peak. At 11,916 feet, Charleston Peak is the tallest mountain in Clark County and southern Nevada. Having already climbed the highest peak in all of Nevada a few years ago, this seemed like a nice complement. Charleston Peak has no permit requirement.

Southern Nevada has a summer rainy season that begins in July, so I decided to hike in mid-June.

I drove out to Charleston Peak after work on Friday with the goal of camping at elevation near the trailhead to acclimatize since more than half the hike is above 10,000 feet. The local area website said that the reserved campsites were all booked, but that dispersed camping was allowed. The website suggested I disperse camp off a road called Champion Road.

The drive took 7 hours due to traffic leaving LA. Immediately after passing through Las Vegas, the landscape got very dark and desolate. For the final 30 minutes, I drove up a steep incline towards my intended dispersed camping site-Champion Road. Once I reached the road, I discovered that it was a dirt road that quickly turned into a 4×4 jeep trail going steeply downhill- (after further research, I now realize that I drove into a riverbed). I quickly realized that I was getting in over my head and decided to turn around in the first spot I could- which was luckily just before a big rock. It took me about 10 minutes to turn the car around on the narrow road, but I did it without any scratches. I then maneuvered the car back uphill along the rocky road. Now seemingly out of options, I opted to sleep in my car on a pullout. Luckily I had a sleeping pad and pillows so my setup was actually okay.

Did I mention that somehow it was just 40 degrees outside?

I woke up at 4am having not slept well at all. Must have been nervousness.

On the 20 minute drive to the trailhead, I blasted my pump up song “It’s a Long Way to the Top in You Wanna Rock n’Roll” by ACDC as I drove to the parking lot at the bottom of Kyle Canyon. It was about 1/4 full.

I started on the hike of the South Loop, which ascends the left side of the canyon. The trail is 8.5 miles one-way to 17 miles total with an elevation gain of about 4,890 feet. In short this is a serious climb.

The trail started in a pine forest (who would have guessed that this is 45 minutes from Vegas). The climbing began immediately.

The switchbacks were moderate. Eventually, I met up with another climber. He was a local and told me about a plane wreck just off the trail near the summit. He also recommended that instead of returning along the South Loop, I instead complete the loop by taking the North Loop back to the parking lot. He said that the North Loop is far more scenic than the South Loop and would take about the same amount of time. I thanked him for his advice and kept on hiking.

Eventually, after a long series of switchbacks, I reached the ridgeline. Here, I met up with a number of locals who somehow ran up here. They said they were training for an ultramarathon trial run and were going to do the run the switchbacks 2 more times today! Insane.

From the 10,000 ft high ridgeline, the trail flattened considerably as it worked its way towards the summit- still 5 miles away. While the trail was easier, my leg started to hurt- more of an annoyance than true pain. I wandered my way through a burned out forest and eventually above the tree-line. The altitude was not a factor because I slept at elevation the night before.

As the summit neared, the trail steepened. About 800 meters before the summit, I saw the path that led to the wrecked plane.

Oh so close, I pushed towards the top. My legs really hurt now but it was too late to turn back and too close to stop for a break. I spoke to myself aloud: “push it, push it, push it” as I struggled.

Eventually I made it to the windless 11,916 ft tall summit of Charleston Peak!!

The view was incredible: I could see the Las Vegas Strip, Area 51, Pahrump and behind it Telescope Peak from Death Valley.

After 15 minutes of celebrating and signing the summit logbook, it was time to head down. The North Loop continued down the other side of the mountain.

The trail started with some steep switchbacks that led to a bristlecone pine forest. One switchback even went through snow!

At the bottom of the switchbacks, I crossed a short snow bridge.

Soon, I was on top of a a series of steep cliffs- about 100 feet high. The trail expertly maneuvered its way along the clifftop. If it weren’t 9 miles from the parking lot, this stretch of the trail would certainly be on any list of America’s most spectacular hikes.

I continued for 2 hours along this ridgeline. Annoyingly, the trail maintained its elevation. It was at this point that I realized that the north loop was considerably longer than the South Loop – 3 miles to be exact. I had enough water and food, but my leg was really hurting.

Eventually a sign said 4 miles to the north trailhead at which point the trail started to go downhill into the canyon. The downhill felt better on my leg so I was able to pick up my pace.

I knew I was close to the parking lot when I started seeing families and children on the trail. They asked me how my day was going. I responded with the comical but accurate “extremely tired”.

By the time I reached the north trailhead, I had walked 20 miles. Unfortunately, the North Trailhead was 1.5 miles from my car. So I lugged for another 30 minutes before I reached my car.

The parking lot and the entire area was packed with cars to the point that there was some traffic.

Before heading down to Las Vegas, I decided to celebrate with a summit beer at the nearby Mount Charleston Lodge, a historic restaurant. At the bar, I finally got my beer and had a lovely chat with a local biker chick about traveling to Iceland as a black woman in 2004- more than a decade before mass tourism arrived.

My original plan was to drive back to LA from the mountain, but after hiking 21 miles, I knew it would not be a wise decision to sit in the car for 5 hours. So instead I got a hotel in Las Vegas. The cheapest options were on Fremont Street.

The covered Fremont Street Experience was packed with unmasked tourists so instead I did some exploring elsewhere southeast of downtown (northeast of the Strip). I went to a Thai restaurant called Lotus of Siam and a frozen custard stand. It looks like Las Vegas has a lot of hole-in-the-wall restaurants.

Afterwards, I got a nice sleep and drove back to LA the next morning.

Mount Charleston is one heck of a hike. The combination of the long distance and large amounts of time spent over 10,000 feet makes it very difficult. Additionally, finding the right weather window is tricky. But if you can go, the scenery is stunning and quite unexpected for Clark County, Nevada. You will not regret it.