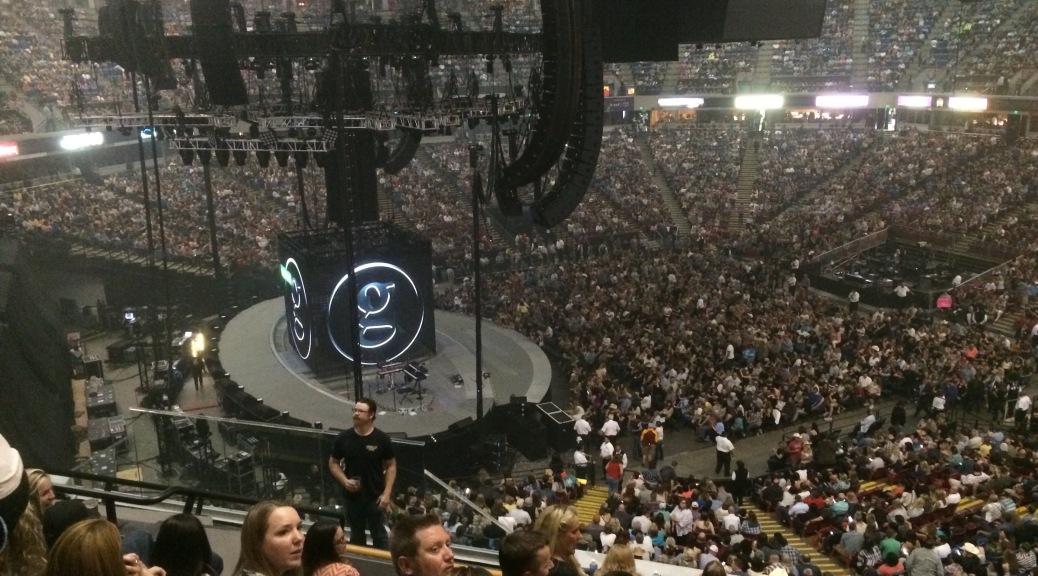 Why The Central Valley:

As a country music fan, one of my favorite artists is Garth Brooks. He is perhaps the most popular artist from the 1990’s and retired in 2001 at the top of his game. He stopped playing, performing, and selling his music. Back in 2011, he started playing acoustic shows in Las Vegas for $250/ticket, which was way out of my price range. The rumor was that he was warming up for a real tour for the first time in 14 years. The rumors turned out to be true and he announced his first date in Chicago in November 2014. In a genius marketing strategy, they announced the dates one at a time, revealing a tour date and location about 1 month before the show. Finally in February, they announced 5 shows in Sacramento, which was the only West Coast show so far (they later announced an Oregon show). Knowing that this might be my only shot to see Garth, I decided to buy a ticket and make a fun 2-day road trip out of it, as Sacramento is 370 miles north of LA.

There are 2 roads to get to Sacramento, Interstate 5 and California 99. They split off in Bakersfield and rejoin in Sacramento. While the 5 is faster, the 99 goes through the cities of the Central Valley, a mostly forgotten part of California that happens to produce 50% of the country’s fruits and vegetables including 90% of the world’s almond supply. Because the Central Valley is flat and agricultural, most people from the coast have no interest in visiting this very important part of the state. However, there actually are a good amount of things to do and see.

Driving up the 99, my first stop was Fresno, about 3 ½ hours north of LA. Fresno has the distinction of being the largest city in America not on an interstate highway. I have been to Fresno a few times for the California State Cross Country Championships, but one place I have never been is the Forestiere Underground Gardens. The gardens are located just off the freeway about 10 minutes north of downtown Fresno. From the surface, they look like a jumble of small trees and building materials. However, underground, the place comes alive. The gardens were built by one man, Baldarsare Forestiere, as an underground resort with 22 acres of caverns. Originally a construction worker on the Boston and New York subway systems, he built the underground gardens to escape the hot summers of the Central Valley before spending 40 years trying to convert the space into a resort. Completely hand-shoveled, the resort never opened. In between the 50 guest rooms, he dug out sky lit courtyards where he planted citrus trees. The underground environment proved to be better growing conditions due to the presence of indirect rather than direct sunlight. The leaves and fruit never bruised and the trees grew taller and faster to reach the sun. The fruit of the trees grew at ground level so that he was able to simply walk to the surface and pick the trees without using a ladder or a fruit-picking tool. Today, the family still owns the property and makes money through tours and by selling the fruit.

The tour was spectacular and went through 2 of the 22 acres and lasted an hour. Highly recommended for anyone going through Fresno or passing through, since it’s right off the 99.

About an hour north of Fresno is Merced, which is known as a gateway city to Yosemite and as the location for UC Merced, the newest UC Campus and the only US research institution founded in the 21st century. I decided to first stop at the campus, which is 10 minutes outside of town near the shores of Lake Yosemite, a large reservoir. The school was on spring break, so campus was eerily quiet, but I was able to walk through all the brand new buildings. While the school is very small compared to the other UC campuses, the school has lots of room to expand. One building that stood out was the Joseph E. Gallo Recreation & Wellness Center. In addition to a gym, this building housed a visitor center for Yosemite National Park run by student park rangers. Since Yosemite Valley is only 90 minutes away, many students go there on weekends. The school has set up an internship program for students to be part time rangers on weekends.

After visiting the school, I drove through the downtown, which was very spread out. I couldn’t find a main shopping street or area with a lot of businesses. However, I did find a beautiful old courthouse that looked just like the ones in the Midwest. They had a museum that was supposed to close in 10 minutes, so I decided to peek my head in. The lady who ran the museum decided to give me a quick tour of all the rooms while she closed them up for the day. The courthouse is the only one of its type standing in California after other Central Valley counties renovated or tore down theirs. The rooms included the old courtroom, the county records chamber (which still houses many of the records), and a room where all government employees would pick up their paychecks. Upstairs, the rooms houses exhibits about Merced’s history. A large number of people emigrated to Merced and the Central Valley from Oklahoma during the Dust Bowl era. Merced’s population has been increasing steadily ever since.

30 minutes past Merced is the town of Turlock, population 70,000. Unlike Merced, Turlock had a very compact downtown and Main Street with lots of trees and shops. After a quick drive through the town, I stopped at the Dust Bowl Brewing Company in downtown. I ordered the sampler, which included their signature IPA (Hops of Wrath), a local cider, a cherry beer, and an imperial ale with 13.7% alcohol called Soul Crusher. Even though I only got 3 ounce pours of each, the Soul Crusher definitely lived up to its name.

From Turlock, it took another 90 minutes to get to Sacramento. After a long day of sightseeing and driving, it was now time for the main event, the Garth Brooks show at the Sleep Train Arena, home of the Sacramento Kings. Everyone was in the building at 7:30. My seat was behind the stage on the upper level way up in the top. Luckily I had a clear view of the stage.

The opener came on around 7:40. She was a songwriter who had written songs for Garth’s wife Trisha Yearwood and was very good in her 5-song set. 45 minutes later, they started the 5-minute countdown. Immediately people started cheering and stomping their feet.

By the time Garth Brooks emerged from the box-like contraption in the middle of the stage, the crowd was on their feet yelling as loud as I have heard any concert. Garth wore a cowboy hat and a flannel shirt, just like everyone else in his band. Rather than a mic stand, he wore the microphone as a headset, which allowed him and the band to move around the stage. Garth kicked off the show with the title track of his new album, Man Against Machine. In just that first song, Garth ran all over the stage multiple times making sure every section got recognition. As he would run to the different sections, everyone would yell and raise their hands. Garth would also do his signature yell at key parts in the song, which also excited the audience. After the song, the entire audience started stomping their feet and yelling. This trend continued after each and every song. Garth did a great job of riling up the audience and keeping the excitement going.

He first built up the excitement by increasing the intensity from Two Pina Coladas to Papa Loved Mama to his most amped up song, Ain’t Going Down (Till The Sun Goes Up). Even after he started playing slower songs such as The River or The Thunder Rolls, the crowd was just as excited. The one much-needed break in the concert came about an hour or so in. Garth started off singing In Another’s Eyes when Trisha Yearwood walked out and finished the song before doing a few songs of her own. Since her songs are much slower and because she isn’t Garth Brooks, a lot of people sat down and rested while she played 4 songs including XXXs and OOOs, Prizefighter, and She’s In Love With The Boy.

Garth then came back on stage and introduced his band. The newest person started playing with him in 1995, which explains why they were so fluid. Right after playing Friends In Low Places (with the unrecorded 3rd verse), a lady in the audience held up a poster in the shape of a guitar with the words “Wanna Trade?”. Garth then handed her his guitar and told her “I hope this guitar brings you as much joy as it brought me”. Needless to say, everyone went crazy. Garth then played the rest of his show including the encore with that “guitar”. Most country musicians don’t play guitar with their bands, the guitar is usually unplugged and Garth Brooks was no exception. He mimed the guitar better than anyone I have ever seen.

For the encore, Garth played Fever, his first single Much Too Young (To Feel This Damn Old), and finally Standing Outside The Fire. Everyone stayed for the whole show. After the show, I walked outside to look for my car. I thought I found the correct section (as determined by the trees), but after 30 minutes of looking, I still couldn’t find my car. Finally, I decided to walk completely around the arena and eventually found it. I was very frustrated- the failure to find the car was probably due to fatigue. After, I drove straight to my hotel, checked in and crashed around 11.

I then went to bed to rally for my final day in the Central Valley.

One thought on “Central Valley Part 1: The Road to Garth Brooks”