Amiens, the capital of France’s historic Picardy region is located 120 kilometers north of Paris. A popular day-trip from Paris because of its famous cathedral and the hometown of French President Macron, I decided to visit after booking a flight into the Beauvais airport. While RyanAir considers the airport Paris, it is actually closer to Amiens. I had to be in Paris that evening but the day was mine.

The airport happened to operate a direct bus to Amiens (cost approximately 11 Euros). After departing the airport, we drove through the beautiful farmland of Picardy. It reminded me of Iowa.

We stopped in a few small towns before reaching the main Amiens bus terminal- located in the center of town. The journey took approximately 90 minutes.

After a much-needed croissant, my first stop was the Jules Verne house. The famous author lived here for 18 years.

His most famous books (Around the World in 80 Days, 10,000 Leagues Under the Sea) were not written in this house. However, he wrote many books in the tiny office/bedroom on the top floor. I was shocked how small his living and working quarters were given the size of the house.

I then walked through the lively modern town center to Jean Trogneux. This 6th generation shop sells the world-famous macarons d’Amiens- a special type of macaroon. Unlike their silky colorful Parisian cousins, the Amiens macaroons are rough with a brown grainy texture. They are absolutely delicious and worth trying if given the chance!

I then walked over to Amiens’ star attraction, the Notre Dame d’Amiens cathedral: France’s largest church and a UNESCO World Heritage Site.

A gothic cathedral, the Amiens Notre Dame looked similar to France’s other Notre Dame churches. So far, I have been to the ones in Paris and Reims. This one dwarfs those in size. By volume, it is twice the size of Paris’ Notre Dame.

On the inside, the place is a cavern. I feel weird saying it, but it is almost too big, especially considering the meager number of pews. But 500 years ago, this place must have been a zoo on Sundays. There are a few relics, but the interior is pretty bare. There are also memorials to the soldiers of various nations who fought in World War I’s Battle of the Somme where an incomprehensible one million were killed. It is impossible to imagine that much bloodshed.

It was now lunchtime, so I headed to the nearby St. Leu district for a crepe. The neighborhood, with its canals and old houses, was beautiful and quaint. 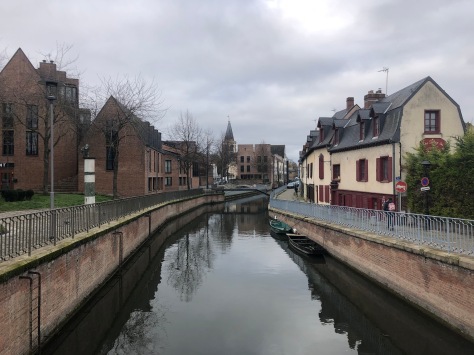 With a final hour to burn before the next train to Paris, I wandered around a large urban park called St. Pierre Park. It felt more like an American park than a French one with its large grassy areas and tennis courts. With that I headed to the train station and in an hour I was in the heart of Paris.

While Amiens isn’t so full of sights besides the cathedral, it has just enough to offer to warrant a day trip. I wouldn’t make it my top day trip from Paris, but if you want to see a normal mid-sized French city, Amiens is a great bet.