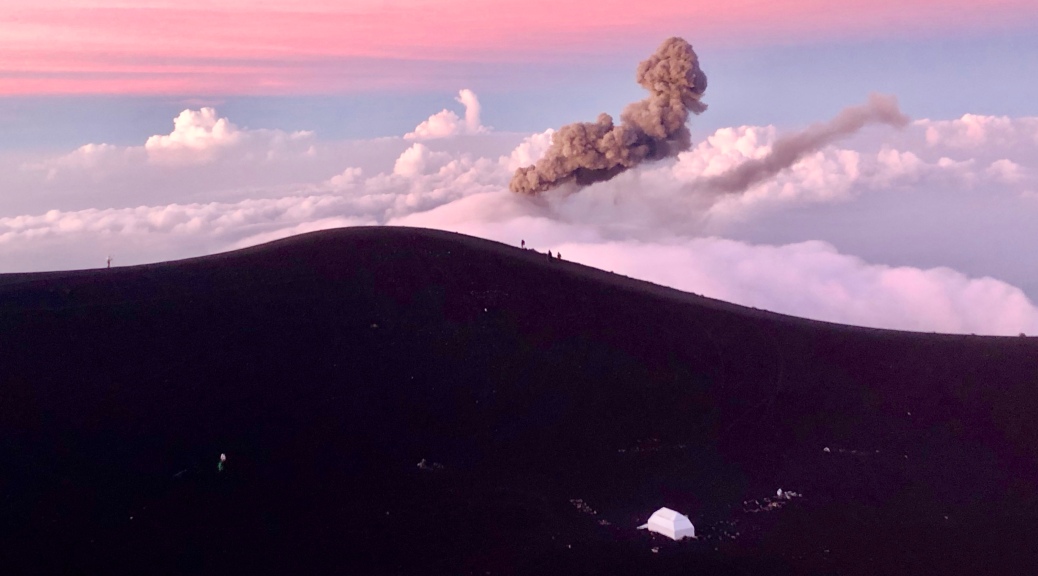 Acatenango is Central America’s third highest peak at 13,045 ft (3,880 meters) and is considered one of the top adventures in Guatemala. Trips leave from Antigua and take a day and a half.

The highlight of any Acatenango hike is the view of the active volcano Fuego. Fuego is just two miles from the campsite. At night, the lava eruptions from Fuego glow. While Acatenango can easily be summited in a day, almost every trip spends a night on the mountain to see this spectacle. While Fuego cannot be summited, some tours (and crazy people) walk up Fuego to a “safe” viewing area.

Prices range from $30 on the low end to $120 on the high end. I opted for a midrange $55 trip (400 Guatemalan quetzals) run by the Tropicana Hostel. I picked it for its universal acclaim among fellow travelers. Many of the low-end trips have terrible food and force you to carry camping gear up the mountain. Tropicana’s trip had (reportedly) good food and has a hut at the campsite stocked with sleeping bags, pillows, and mattresses.

While the tour company provides a lot, there are some things that they expect the climber to provide: water (4 liters), snacks (because the meals are not enough), warm clothing (most tour companies will rent items for you), headlamp (can also be rented), and a medium or large backpack.

Most backpackers book their climb a day or two in advance and I was no exception. I booked a Thursday and my trip left on a Saturday. While short-term travelers may want to book online in advance, they will probably overpay. At this time (mid-2019), the mountain is never full and there are always groups with room.

Today was the day. I woke up and finished packing. Then I got breakfast in my homestay and walked over to the Tropicana Hostel at 8AM. At Tropicana I got a second breakfast (which was included in the ticket price) and met my group. We had 7 Israelis, 3 Québécois, an Aussie couple and an Irish guy. At 8:30, we had a gear check where some people (including myself) rented extra clothes and headlamps, we headed out. I felt like I had enough warm clothing, but decided to take extra layers after hearing multiple people talk about how cold it was.

At 9, we packed up the van and drove an hour to the trailhead where we met out guides Eddie and Marco. He spoke only Spanish, but it was okay because I knew basically everything he was saying thanks to my week of Spanish lessons in Antigua. The hike was estimated to take approximately 5-6 hours of straight uphill.

We started walking through farmland- specifically cornfields. It was hot and the trail was very steep. The group was moving very slowly at this point- we took breaks every 5-10 minutes. After 30 minutes, we reached the entrance to the national park. From there, we ascended through a thick tropical jungle then a pine forest. Eventually the forest thinned into high alpine terrain. We could now see the black volcanic soil. Every few minutes, we would hear a loud boom which was Fuego erupting.

After 4 ½ hours of walking, we reached our campsite. We climbed 4,000 feet (1,300 meters) to reach an elevation of about 12,000 feet. While the hike was difficult, I felt good the entire way but others did not and were clearly not in as good of shape.

Our campsite was not at the top of the mountain but rather 1,000 feet (of elevation) from the summit. However, we had a prime view of the Fuego just two miles away. Fuego is one of the world’s most active volcanos and erupts every 10-15 minutes. It was currently covered in thick clouds but we could hear a huge boom every time Fuego erupts.

At this point, there was literally nothing to do so we hung around the campfire for about 4-5 hours and watched Fuego explode when the clouds (a spectacle of their own) cleared. It took an hour before we could even catch a glimpse of Fuego’s summit. The volcano was doing a strip tease of sorts. Fuego would erupt every 8-12 minutes. Each eruption would last 20-30 seconds. Even if you couldn’t see it, you could definitely hear Fuego erupt.

Marco- donned in a pink camouflage jacket- made cup ramen for us as a snack. It had 80% of the recommended daily sodium intake but nobody cared because we hiked up 4,000 feet. It was delicious! An hour later he came by with boxed wine. 30 minutes after that we got spaghetti. Then 30 minutes after that, we got hot chocolate and marshmallows. The food was awesome!

Even though we weren’t really doing anything, the scenery was so spectacular that we were not bored. A few Israeli guys got altitude sickness and weren’t feeling great but everyone else was chilling by the fire. As the sun set it got really really cold – probably around freezing. The cold was compounded by the fact that we were adjusted to the warm humid temperatures of everywhere else in Guatemala.

In addition to cold temperatures, the night also brought out the lava. During the day, the volcanic discharge looked like black smoke, but at night it was revealed to be bright red lava. The explosions at night appeared far more violent than in the day. The lava thrust itself out of the land splintering in the air before rolling down hundreds, maybe even thousands of feet of barren slopes. It was so beautiful and spectacular.

At the same time, a lightning storm raged below us and a shooting star appeared. Wow, what a magnificent display of nature! Even though I was tired from the hike and shivering cold, I could not have been happier with my decision to come here. We went to bed at 8:30PM as the volcano was putting on a SHOW.

We woke up at 3:45 AM and started hiking at 4:15. It was dark outside and we hiked using our headlamps. The trail to the top was very steep, but easier than yesterday because our packs were lighter. It took us an hour with only one water break.

Just before the summit, we stopped. Marco told us to put on every warm article of clothing we had – it was about to get windy. After another minute of walking we reached the rim of the crater of Acatenango. The true summit was visible on the other side just a few hundred meters away. Marco wasn’t kidding about the wind. It was probably 25-30 miles per hour- strong enough to make conversations difficult.

As we reach the summit of Central America’s 3rdhighest peak, the sun started to rise. It could not have been more perfectly timed. We were all shivering, but wouldn’t choose to be anywhere else in the world at that moment.

After 15 very cold minutes on the summit, we quickly headed back down to camp where breakfast was waiting for us.

Fuego was perfectly clear now and we all took the beautiful perfect pictures we failed to take yesterday.

At 8AM, we started downhill. Nobody wanted to be on the mountain anymore, so we jogged down. It took only about 90 minutes to reach the bottom where the van and lemonade were waiting. We left at 10 and returned to Antigua at 11:15.

Acatenango was the biggest thrill of my time in Guatemala. Yes it was difficult, but the dual reward of summiting the mountain and seeing Fuego made it more than worth it. If you are in Antigua and are thinking of an excursion, I cannot think of anything better than Acatenango.